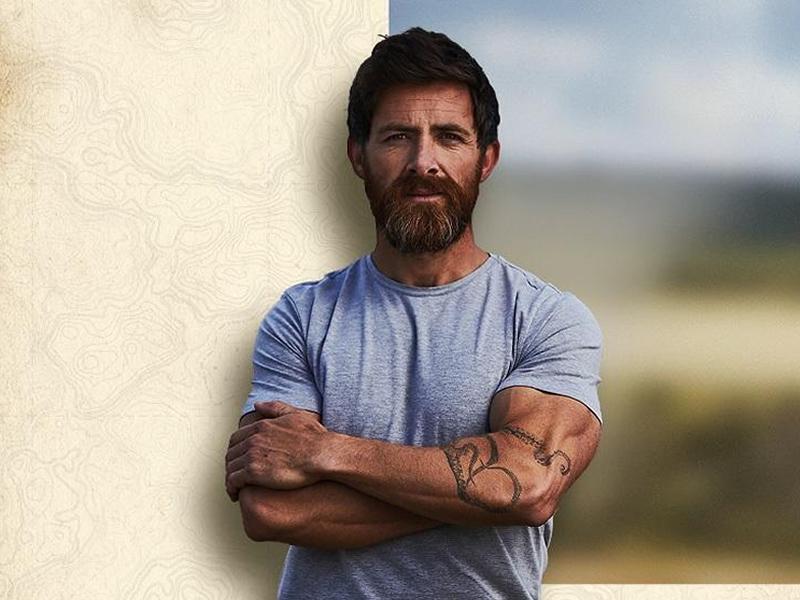 Trained Royal Marines Sniper, world record breaker and extreme TV adventurer, Aldo Kane, is known for his ability to navigate and lead through challenging and pressured environments. With a penchant for the world’s most dangerous, extreme and remote locations, he has compiled his most awe-inspiring tales in his much-anticipated debut book, Lessons From The Edge.

Join Aldo live in conversation, as he shares jaw-dropping stories from his life and career – whether it be abseiling into an erupting volcano in the Democratic Republic of Congo, rowing the Atlantic, getting locked in a bunker for 10 days with zero daylight, or being held at gunpoint...

Aldo will also talk honestly and openly about his personal battles: how he overcame doors literally being slammed in his face, rediscovered his identity, and how he harnessed his emotions to his advantage to find determination, purpose, and a renewed sense of belonging.

Sharing tips on how to survive and thrive through sheer strength of mind and sharp decision-making, you’ll leave feeling entertained, inspired, and ready to be the captain of your own ship.

Other Events at Assembly Rooms

Fortunately with Fi and Jane: LIVE

Fi and Jane guarantee you an evening of behind-the-scenes revelations and inconsequential, but strangely compelling, chat about living some of their lives behind the microphone.
Read more

Critically acclaimed comedian Chris Ramsey is hitting the road for his biggest ever stand-up tour! Catch him at the Assembly Rooms on 20th November!
Read more

The Edinburgh Gin Festival is coming to the Assembly Rooms on Saturday 27th November! Come along and meet the distillers, chat, sample and even buy a bottle to take home!
Read more

Fresh off the back of releasing their top 10 3rd album ‘No One Else Can Wear Your Crown’, Oh Wonder have announced a brand-new run of UK dates and come to the Assembly Rooms in November!
Read more

You can dance, you can jive, having the time of your life. So dust off your platforms, put on your flares and come along and enjoy an unforgettable Christmas night with Abbamania!
Read more

Neck Deep will tour the UK in 2021 in support of their new album 'All Distortions Are Intentional', catch them at Assembly Rooms Edinburgh on 17th January!
Read more

Gordon Buchanan will discuss his incredible 30 year career as a wildlife filmmaker at the Assembly Rooms on Tuesday 22nd February!
Read more

GZA - hip-hop legend, lyrical swordsman and founding member of the Wu-Tang Clan - returns to Scotland with a date at the Assembely Rooms on 4th March!
Read more

Gary Faulds is taking his brand new show on the road in 2022 for his biggest tour to date and comes to the Assembly Rooms on 12th March!
Read more

Joe Jackson is launching a new tour in 2022 and has a date at the Assembly rooms on Sunday 20th March!
Read more

Imelda May will visit the Assembly Rooms Edinburgh in April as part of her 'Made to Love' UK Tour.
Read more

Hear the story of Agnes Sampson, a woman from East Lothian, and discover the events which led to her being accused of witchcraft and questioned by the King himself.
Read more

Raking Among the Treasures

A chance to see the recently created film of George Mackay Brown’s early play The Storm Watchers, performed by a cast of Orcadian women filming in their homes on mobile phones during lockdown.
Read more

The Festival’s famous Open Hearth returns to the Netherbow Theatre for a relaxed traditional session of stories and music.
Read more

To coincide with its publication, we invite you to join comedian and podcast host Adam Buxton as he talks about and reads from his new book.
Read more

Discover this extraordinary Needlework casket up close for one day, with short talks from our curator at The Palace of Holyroodhouse on 18th October.
Read more

Global Lab is an open community of creativity and co-learning, hosted by the Scottish International Storytelling Festival
Read more

An evening of humorous, inspiring and informative contemporary collected tales about sex, presented for the wellbeing and inspiration of other women, and for those who care about them.
Read more

The Institut Francais d'Ecosse is delighted to welcome back Stéphanie Trouillard, journalist at France24, for an in-person talk on Tuesday 19th October.
Read more