TuFlamenco is back with its traditional flamenco performance on its purest form presenting 'Tablao Flamenco' right in the heart of the city. 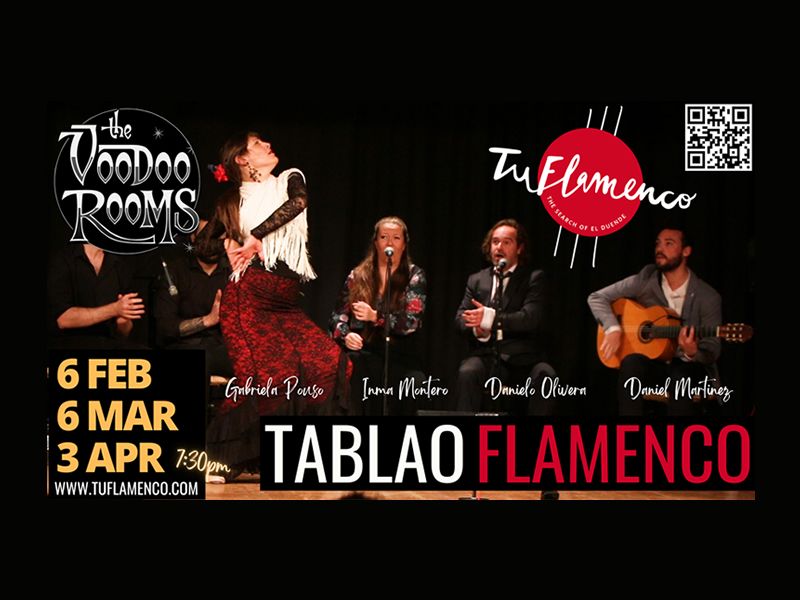 TuFlamenco is back with its traditional flamenco performance on its purest form presenting 'Tablao Flamenco' right in the heart of the city. The artists Inma Montero, Daniel Martinez, Gabriela Pouso and Danielo Olivera will lift spirits once more with the passionate and penetrating flamenco voices and their skilful clapping, the impeccable technique and brilliance of an incredibly well played flamenco guitar, and to culminate this already special flamenco ensamble, the raw power, beauty and elegance of the flamenco dancing.

Get ready for another of our flamenco sessions where anything could happen and every performance is different. Be sure you are up for a great night, a beautiful way to end the week and begin the new one, an authentic Flamenco night that has been always remarkably reviewed ***** and the chosen space, the ´Speakeasy´ at the Voodoo Rooms is perfect for an intimate flamenco session.

Our series of performances “Tablao Flamenco” will be running regularly every first Sunday of the month. First series are the 6th February, 6th March and 3rd April. We will organise a repertoire for each single show so the audiences can repeat nights and enjoy an entirely different performance from previous ones, leaving also space for improvisation of the moment. For this reason we have included the possibility of acquiring a TuFlamenco Friends Special Pass that will give you the possibility of getting your tickets cheaper, in case you would like to assist regularly to our Tablaos, and also you’d receive personalised material regarding the shows sent to your email. These tablao performances will inspire musicians, dancers and any person avid of passion.

Produced by TuFlamenco guarantees quality and true in every performance as one of the motos of the team is the search for a passionate cocktail of flavours that will make you feel right in one of those hidden spots where just flamenco with its magic happens.

Experience it! Don’t let others tell you.

Other Events at The Voodoo Rooms or TuFlamenco: The Search of El Duende

The Fringe's shadiest late-night strip joint is back and we have missed you! Join the illicit crew as they welcome audiences back for a show that is rude, crude and nude!
Read more

Join Cameron Gibson on a journey of discovery through influence, thought and imagination as he uses his unique skills of mind-reading, psychology, mystery and magic to demonstrate extraordinary feats.
Read more

The Prince of Dark Comedy returns to Edinburgh with his new show, accompanied by his singing dictators The Iraq Pack and a cast of mind-blowing acts.
Read more

Join Glasgow’s very own GlasVegas Showgirl Roxy Stardust, fresh from her explosive tour of the Isle of Mingulay, as she presents an hour of burlesque performance.
Read more

Legendary Brazilian jazz-funk trio Azymuth announce their long awaited return to Europe in 2022 and have a date at The Voodoo Rooms on Monday 3rd October.
Read more

It’s been five long years since Daddy Long Legs were last at the Voodoo Rooms but now they are back on Thursday 13th October!
Read more

The Bellrays call their music 'Maximum Rock & Soul', which is as much a description of the heart that goes into their music as it is the music itself. Catch them at The Voodoo Rooms on 31st October!
Read more

GA-20 clearly is on to something big. The dynamic, throwback blues trio are disciples of the place where traditional blues, country and rock ‘n’ roll intersect.
Read more

To mark the release of The Little Kicks new album "People Need Love", the band will play the album in its entirety with a live String quartet and special guest support.
Read more

Michael Head & The Red Elastic Band are on tour this winter with a date at The Voodoo Rooms on 6th December.
Read more

Legendary Brit-Funkers, The Blockheads, will be performing a large selection of their classic songs spanning over 5 decades at The Voodoo Rooms on Friday 24th February!
Read more

Fore Play Crazy Golf is buzzing to introduce BOGO(L)F Wednesdays in Edinburgh... an exclusive package that includes buy one get one free on all golf and 50% off selected cocktails!
Read more

Enjoy an evening stroll around Holyrood Park as you join our Rangers to learn more about Arthur’s Seat’s turbulent past, created by fire and ice!
Read more