Comedy In The Park

Prepare for a riotous summer evening of laughter as Comedy In The Park, an exciting all-day comedy extravaganza with headliner John Bishop, comes to Dalkeith Country Park on Saturday 24th July! 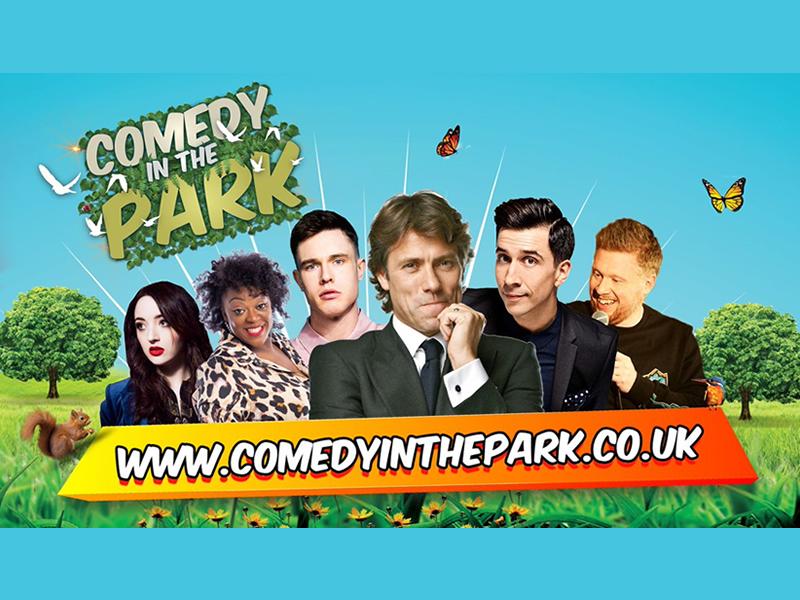 About Comedy In The Park

Prepare for a riotous summer evening of laughter as promoter M&B announces a huge comedy event for 2021. Comedy In The Park, an exciting all-day comedy extravaganza, will take place at the stunning grounds on Dalkeith Country Park on Saturday 24th July 2021.

Comedy in the Park is a unique outdoor experience, bringing you some of the biggest and best names in comedy all on one stage! You will be guaranteed a night of side splitting laughter, with 6 of the worlds best comedians providing a night of entertainment in an open air theatre style setting. We will turn a section of some of the greatest park spaces in the UK into an incredible arena for the evening.

Loose Women star Judi Love hosts the event. Love’s quick wit and infectious laugh quickly made her a fan favourite when she joined the Loose Women panel in 2020. Judi’s motto ‘Laughter is Healing’ provides a very accurate insight into how she deals with life’s many obstacles. Judi will take everyday situations, add her unique perspective and turn it into something hilarious. It’s the type of humour that resonates in people from all walks of life. Love has proved herself to be a hilarious comedian in both her stand-up and across TV and radio.

John Bishop – John headlines the first ever Comedy in the Park at Wicksteed Open Air Theatre. The combination of John Bishop’s ability to keep the laughs coming along with his unique brand of observational humour, his undeniable charm and unrivalled gift of creating a relaxed atmosphere mean that the feel good factor of spending an evening in his company is absolutely priceless. Judi Love – Straight-talking powerhouse Judi Love is one of the UK’s most stand-out up-and-coming performers. A brilliantly engaging comic on stage, Judi takes everyday relatable situations that resonate with audiences and brings them to life in hilarious routines.

Fern Brady – Known for being totally unique and completely fearless, her caustic wit, exceptional writing and electric stage craft has made Fern one of the UK’s hottest comedy stars. As seen on Live from the BBC, Live from the Comedy Store, The Russell Howard Hour, and Live at the Apollo. Featured in Vogue as one of the Top 5 Female Comedians as well as the Telegraphs top 5 young comedians to watch, Fern’s career has gone stratospheric in the last 18 months. She’s had viral success with her BBC Life Lessons, stormed the Australian comedy scene and supported Frankie Boyle and Katherine Ryan on Tour.

Ed Gamble – Stand-up comedian Ed Gamble is known as a regular on Mock the Week (BBC2) and for being the co-creator and co-host of the hugely successful mega-hit podcast Off Menu with James Acaster. The podcast was an instant success, leaping to the top of the charts when released in 2018, and has consistently topped the iTunes and UK Comedy Podcast charts since. In just three series it has had over 28 million downloads. He is also the co-presenter of Radio X’sSunday morning show with Matt Crosby

Russell Kane – Multi-award-winning comedian, presenter, actor, author and scriptwriter Russell Kane is best known for the BBC Sounds podcast, Evil Genius which has become a flagship show and was the best performing original podcast on the platform. Russell’s other podcast Boy’s Don’t Cry also features regularly on the iTunes top charts for listened to podcasts and will return with a new series later this year. Recent TV appearances include The Apprentice You’re Fired, The One Show, Antiques Roadtrip, Stupid Man, Smart Phone and the host of three series of Live At The Electric. Other TV appearances include Live At The Apollo, Unzipped, Celebrity Juice and I’m A Celebrity… Get Me Out of Here Now. Following the success of his sell-out tour throughout UK and Ireland, Russell has extended The Fast and The Curious far into 2020. As ever, Russell also continues to provide his ever-popular topical online Kaneings.

Paul Smith – Following his first national tour in 2018, which saw him go from circuit act to one of the biggest selling names in UK stand-up in less than a year, Paul Smith took the UK comedy circuit by storm, selling out TWO national tours! Nicknamed the ‘Ginger King of Comedy’, his quick wit and affable nature makes him popular with any crowd – especially after being crowned Liverpool’s New Comedian of the Year and a Finalist at The Leicester Comedian of the Year competition. Paul Smith is one of the wittiest and funniest comics on the circuit currently, and is renowned for being one of the most sought after hosts in Comedy.

M&B will transform Dalkeith Country Park into a carnival of comedy. In addition to comedy you can expect award-winning street food; pop up cocktail bars, cafés, bars, shops and stalls. The ultimate night out for any comedy lover!!

Promoters are confident that the event will be something to look forward to next year as COVID-19 restrictions are lifted. However, because of the size of the location, plans can be adapted to run the event with social distancing should that be required and the event will be completely safe and COVID compliant.

Other Events at Dalkeith Country Park

Tough Mudder is coming to Dalkeith Country Park this July. Will it be the classic 10 mile series of obstacles and mud runs or the shorter, 5k course? Both will push your physical and mental limits!
Read more

Let's Rock Scotland, the Ultimate 80's Festival, returns to Dalkeith Country Park on Saturday 19th June 2021 with a fantastic lineup of artists bringing you the very best of the 80’s!
Read more

Dig out your 70s fashion, dust off your platform boots and get ready to sing and dance the night away at this fantastic show.
Read more