Back To Bacharach is a fantastic show for all ages, friends and family, songs everyone will remember and fall in love with again. 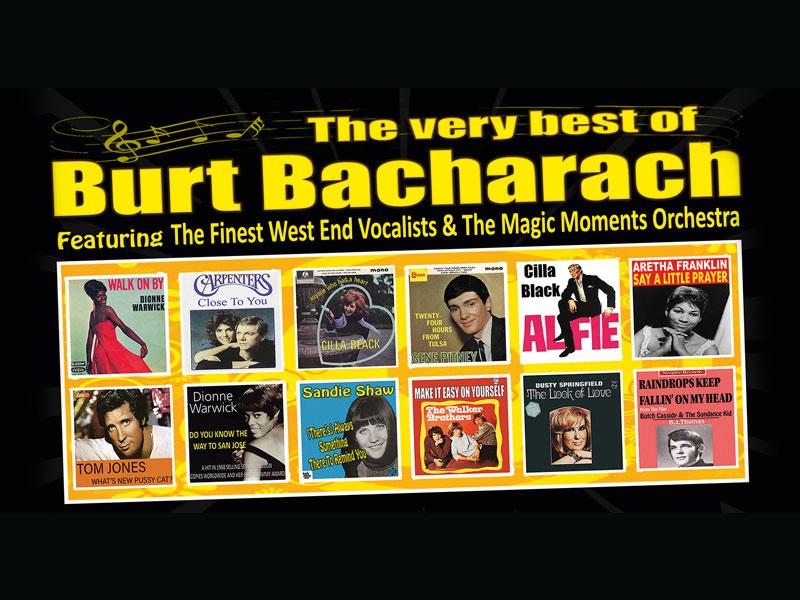 About Back to Bacharach

Back to Bacharach celebrates the magical music of Burt Bacharach, one of the most accomplished popular composers of the 20th Century, who together with Hal David, penned some of the most memorable and iconic hits that stand the test of time.

10 Amazing Musicians, 3 West End Vocalists, 1 Great Performance. Back To Bacharach is an exciting production, touring throughout the UK featuring 3 of the finest West End vocalists, accompanied by an amazing 10-piece band, recreating Burt Bacharach's timeless masterpieces. All of his greatest hits are featured in this amazing 2-hour show including... Alfie - What The World Needs Now, The Look Of Love, Close To You, I Say A Little Prayer, What's New Pussycat, Do You Know The Way To San Jose, Walk On By, Magic Moments, Trains & Boats & Planes, 24 Hrs From Tulsa, Anyone Who Had A Heart, I'll Never Fall In Love Again, Wishin' & Hopin', Always Something There To Remind Me, Raindrops Keep Falling On My Head & many more.

Burt Bacharach is a legend of popular music who has won 6 Grammy Awards and 3 Academy awards with over 70 top 40 hits in the USA and over 50 top 40 hits in the UK, which have been recorded by many successful artists throughout the years such as: Cilla Black, Tom Jones, Dionne Warwick, Aretha Franklin, Gene Pitney, Frank Sinatra, Elvis Presley, The Beatles, Dusty Springfield, Elvis Costello, The Carpenters to name a few.

Back To Bacharach is a fantastic show for all ages, friends and family, songs everyone will remember and fall in love with again. There's Always Something There To Remind You.

Other Events at Howden Park Centre

The Elton John Show is the UK's newest and most exciting Elton John tribute show to hit the stage.
Read more

The History Of Rock

Featuring the music of artists such as Led Zeppelin, Cream, Guns n Roses, AC/DC, Queen and many more, don't miss The History Of Rock when it comes to the Howden Park Centre!
Read more

The Beauty Queen Of Leenane

Elvis Tribute Act Johnny Lee Memphis is the official and current World Cup and European Elvis Tribute Champion and you can catch him at the Howden Park Centre on 16th September!
Read more

Having toured extensively with The Counterfeit Sixties show they now bring you their unique Seventies show from a decade of glam rock through to new wave music, and everything in between!
Read more

Jerry Sadowitz: Not For Anyone

American-born, Scottish stand-up comedian and magician Jerry Sadowitz will bring his new show, Not For Anyone, to the Howden Park Centre, Livingston on Wednesday 19 October!
Read more

Argentine Tango King and Strictly Come Dancing legend, Vincent Simone, returns to the stage in the Autumn with his brand new show ‘Tango Passions’. Catch him at the Howden Park Centre in November!
Read more