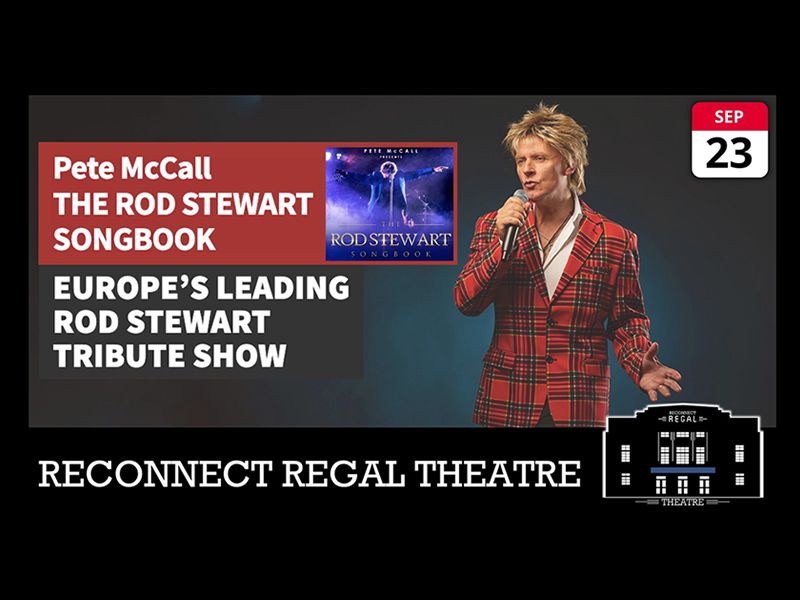 About The Rod Stewart Songbook

The Rod Stewart Songbook’s spectacular theatre production is the ultimate homage to Rod Stewart, featuring Pete McCall, Europe’s foremost tribute. Along with his sensational live band, you will be taken on a musical journey spanning 50 years, when one of rock music’s greatest icons sold over 250 million records worldwide. These unforgettable hits include Sailing, Maggie May, Da Ya Think I’m Sexy, Some Guys Have All The Luck, Baby Jane, Rhythm Of My Heart, You Wear It Well, Hot Legs and many many more.

Pete is a consummate professional, whose attention to detail shines through in every way, including stage presence and fabulous costumes. His vocal ability is unequaled and he has the closest voice in the business to the man himself. The Hull Daily Mail quoted on the 5th February 2020, “Pete McCall is the next best thing to seeing Rod himself”. Even the great Rod Stewart would be proud of the tribute paid to him by Pete McCall, in fact Rod’s sister Mary Cady, said to Pete “you were excellent”.

At the show you could easily think you were at an actual Rod Stewart concert, where the atmosphere is electric and the audience are encouraged to participate, sing along and even dance in the aisles. Unlike the majority of other theatre productions that use backing tracks, the band play 100% live, which provides that authentic flavour Rod was famous for. Wherever the venue your audience will be guaranteed a night they will never forget and will feel as though they have not just seen a show, but have had “an experience”.

The Ghosting of Rabbie Burns

Hilarious comedy, The Ghosting of Rabbie Burns by Gillian Duffy, proves that love and relationships haven't changed that much in 200 years after all! Catch it at The Reconnect Regal Theatre!
Read more

Desperados deliver a rip roaring set from the outstanding back catalogue of one of the greatest band's in history, The Eagles!
Read more

The all-new Circus of Horrors show will have you sat on the edge of your seat when not falling off it with laughter.
Read more

Wrestling Experience Scotland is Scotland's No. 1 Wrestling event catering for fans of all ages and it's coming to Reconnect Regal Theatre on 5th March.
Read more

The RETRO Rock Show is a live 2-hour extravaganza of the greatest rock songs and power ballads of the 70's 80's and 90's. Catch it at the Reconnect Regal Theatre, Bathgate on 2nd April!
Read more

The Wedding Planners is the hilarious girls' night out you won't want to miss and it's coming to the Reconnect Regal Theatre in Bathgate on 7th April!
Read more

If you like the Beach Boys® songs, you will love this band. Catch the Beach Boyz Tribute Band at Reconnect Regal Theatre on Thursday 14th April!
Read more

The Scottish Pink Floyd are a fantastic 9-piece tribute based in Glasgow, don't miss them when they play the Reconnect Regal Theatre, Bathgate on 7th May!
Read more

After the Last Waltz

Starring the Stevie Agnew Band who bring over 30 years of live experience to this electrifying show celebrating the legendary concert and much loved film from The Band.
Read more

Two's Company, at the Reconnect Regal Theatre Bathgate, is the new comedy drama from the writer of The Ghosting of Rabbie Burns and co-writer of The Wedding Planners, Gillian Duffy!
Read more

BGCP Comic Con is coming to Bathgate for the first time, with an array of awesome themed activities, traders and fun for all ages!
Read more