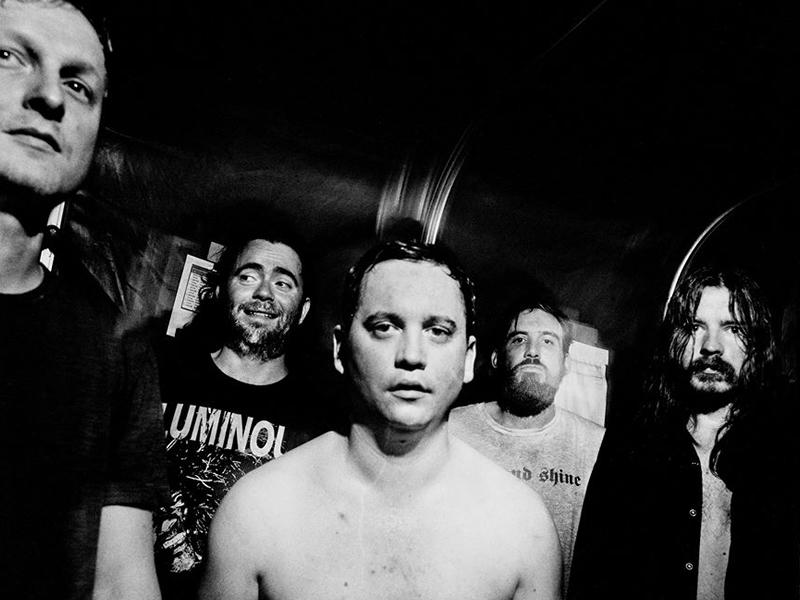 “I learned long ago, never to wrestle with a pig” reasoned George Bernard Shaw. “You get dirty, and besides, the pig likes it.”

True to form, Pigs Pigs Pigs Pigs Pigs Pigs Pigs have left the wiser of us aware that they are no band to be messed with. In the seven years since this band’s inception, the powerful primal charge at their heart has been amplified far beyond the realms of their original imagination. The band’s upward trajectory has done nothing to make the Newcastle-based quintet complacent however, as they’ve used the cumulative force behind them as fuel for their most ambitious and hard-hitting record yet. Viscerals, their third proper (released April 3rd on Rocket Recordings) is an enormous leap forward in confidence, adventure and sheer intensity even from their 2018 breakthrough King Of Cowards. Incisive in its riff-driven attack, infectiously catchy in its songcraft and more adventurous than ever in its experimental approach, Viscerals is the sound of a leaner, more vicious Pigs, and one with their controls set way beyond the pulverising one-riff workouts of their early days.

Yet Pigs have effortlessly broadened their horizons and dealt with all these new avenues without sacrificing one iota of their trademark eccentricity, and the personality of this band has never been stronger. This record is their most far-reaching yet and its ability to get down to the nitty-gritty of the human condition is implicit from its title outwards.

While we take every opportunity to ensure the details for Pigs Pigs Pigs Pigs Pigs Pigs Pigs are accurate, we always advise that you contact the event organiser before setting out for the event to avoid disapointment. All information (whether in text or photographs) is given in good faith but should not be relied upon as being a statement of representation or fact.

UK masters of harmony-laden Americana, The Wandering Hearts, return to Scotland following a stunning sold out show in Glasgow in January 2020 as part of Celtic Connections.
Read more

Grace Petrie’s unique takes on life, love and politics, and the warmth and wit with which they are delivered, have won over an army of loyal fans and you can catch her at Summerhall on 20th April!
Read more

Don't miss American singer, songwriter, and multi-instrumentalist Sam Amidon when he comes to Summerhall on Thursday 13th May!
Read more

432 presents is delighted to announce RODDY WOOMBLE will be performing on Saturday 15th May at Summerhall.
Read more

Don't miss Sheffield band '65daysofstatic' when they come to Summerhall (their only Scottish date) on 13th November 2021!
Read more

Traverse is delighted to present brand new, specially created, pieces from nine Young Writers online, with performers filming in their own homes under lockdown conditions.

Tim Peake: My Journey to Space

Fasten your seatbelts and get ready for an awe-inspiring ride when Tim Peake shares his experience of life in space when he brings his UK tour to the Usher Hall Edinburgh on 11th November 2021!

Rise and shine! Allan Stewart, Andy Gray, Grant Stott and Jordan Young return in the pantomime of your dreams!