Neck Deep will tour the UK in 2021 in support of their new album 'All Distortions Are Intentional', catch them at Assembly Rooms Edinburgh on 17th January! 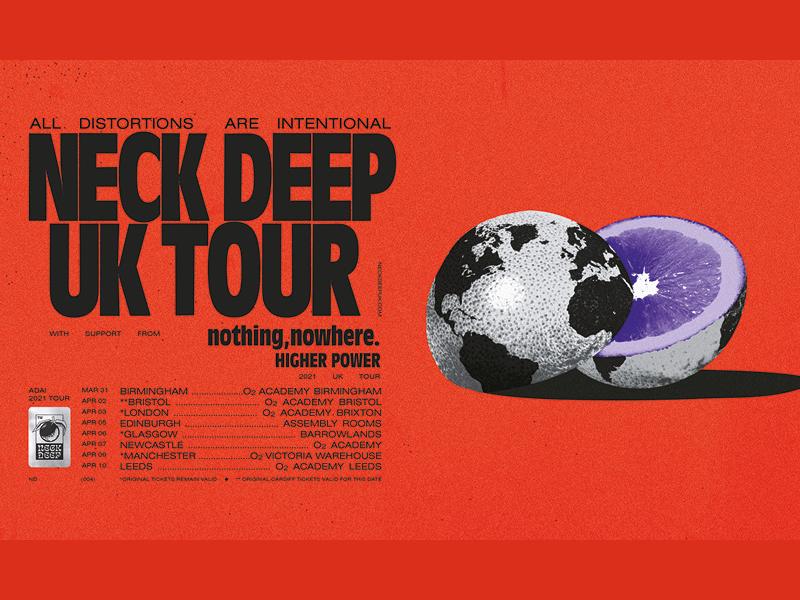 Welsh pop-punks Neck Deep formed in 2012 as the D.I.Y. project of singer Ben Barlow and guitarist Lloyd Roberts. After testing the water with a couple of self-released online tracks, they issued their first EP Rain in July, in late 2012.

Part of the wave of pop-punk revival acts, Neck Deep cited influences like Fall Out Boy, New Found Glory, and Sum 41, offering an updated version of the genre's classic sound. Wanting to expand their capabilities, Barlow and Roberts enlisted friends from the local scene to complete their line-up. Matt West joined on guitar, Fil Thorpe-Evans became their bassist, and Dani Washington joined as drummer.

Their second EP, 2013's A History of Bad Decisions, garnered enough attention to bring them to the US for their first international shows where they caught the attention several major labels. Neck Deep signed with Hopeless Records in August 2013 and, just a few months later in January 2014, issued their debut album, Wishful Thinking. The album was well-received and they spent much of 2014 touring the UK and US supporting bands like We Are the In Crowd and Knuckle Puck, and joining the Vans Warped Tour for a stint.

Their sophomore LP Life's Not Out to Get You arrived in 2015, followed by The Peace And The Panic in 2017.

Neck Deep released their fourth album, All Distortions Are Intentional, in July 2020 and have announced a UK tour in March and April 2021 to support it.

Other Events at Assembly Rooms

GZA - hip-hop legend, lyrical swordsman and founding member of the Wu-Tang Clan - returns to Scotland with a date at the Assembely Rooms on 10th September!
Read more

Fortunately with Fi and Jane: LIVE

Fi and Jane guarantee you an evening of behind-the-scenes revelations and inconsequential, but strangely compelling, chat about living some of their lives behind the microphone.
Read more

Critically acclaimed comedian Chris Ramsey is hitting the road for his biggest ever stand-up tour! Catch him at the Assembly Rooms on 20th November!
Read more

Fresh off the back of releasing their top 10 3rd album ‘No One Else Can Wear Your Crown’, Oh Wonder have announced a brand-new run of UK dates and come to the Assembly Rooms in November!
Read more

Gary Faulds is taking his brand new show on the road in 2022 for his biggest tour to date and comes to the Assembly Rooms on 12th March!
Read more

Imelda May will visit the Assembly Rooms Edinburgh in April as part of her 'Made to Love' UK Tour.
Read more