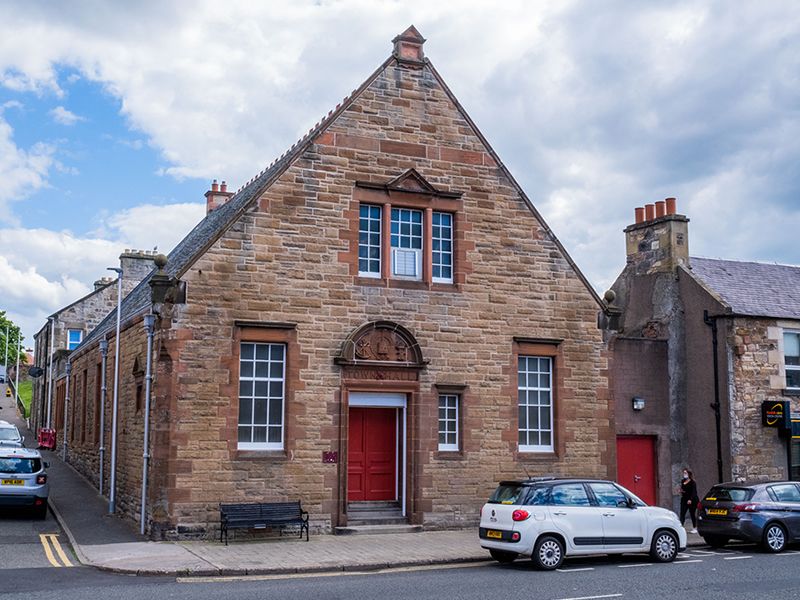 The Victorian town hall was leased to the Battle of Prestonpans (1745) Heritage Trust on a five-year basis in 2021 and the organisation has invested in an extensive refurbishment of the historic building, adding a museum, gift shop and programme of events and exhibitions.

Now HES has provided funding to support projects that bring to life the memories local people have of the building and events that have taken place there: from soup kitchens during the miners strikes to tea dances and Bay City Rollers concerts.

Local people are being invited to share their stories and photos of events and activities at the Town Hall. Such memories will be captured on dedicated wall displays in the Town Hall Reception area; made accessible online; and published in a 'Book of Living History Memories of The Town Hall'. In addition, local artist Janet McCrorie has been commissioned to create an impressionistic artwork that captures the essence of the memories and atmosphere of the Town Hall.

In August 2022, a full-scale costumed re-enactment of the Victorian opening ceremony will take place marking 125 years since it was opened. The Battle of Prestonpans (1745) Heritage Trust is appealing to families to share information about any ancestors who took part in the original opening ceremony.

The Trust has struck a commemorative 125th anniversary medal bearing an image of the hall and the logo of the Burgh of Prestonpans, which will be presented to the descendants of those who originally took part in the opening ceremony in 1897.

Those with memories they’d like to submit or details of descendants who took part in the Victorian opening ceremony are invited to contact ajohnston@battleofprestonpans1745.org, or to get in touch via Facebook at @Prestonpans1745 - or to drop into the Town Hall to chat to the trust in person.

The Town Hall is open every weekend from 10am to 4pm and at other times by appointment.

The Battle of Prestonpans (1745) Heritage Trust is a registered charity promoting the Battle of Prestonpans and its associated cultural heritage for the benefit of both local and visiting audiences and the communities surrounding the battlefield. Prior to the Trust taking on the lease of Prestonpans Town Hall, the hall, which was built in 1897 and had always been used as a community building, was mothballed and not expected to continue in community use.

The Trust’s activities at the Town Hall will also support its work towards developing a major permanent visitor attraction in the Blindwells area of Prestonpans. The Trust has, with the support of East Lothian Council, entered into an agreement with Hargreaves [Blindwells] Limited to develop a high-quality Living History Centre and museum at Blindwells which is scheduled to open in 2027.

Dr Gordon Prestoungrange, Chairman of The Battle of Prestonpans (1745) Heritage Trust, said: “Prestonpans Town Hall has been at the heart of the town’s community for 125 years. We’d urge everyone with memories of events and activities that have taken place there over the years to get in touch. We’d welcome any recollections but would particularly welcome photos. We’re putting together a fascinating local history that reveals so much about the social history of the town itself.

“We’re also really looking forward to giving the Hall the birthday party it deserves in recognition of the years of service it has provided the town with. We’ll put on a full scale re-enactment of the opening ceremony and are thrilled to invite everyone along to this in August. The stories we gather will be displayed continuously in the future.

“Under the care of the Trust, the Town Hall has become a hub for our ongoing activity, creating exciting new volunteering and skills-building opportunities. We’ve enjoyed welcoming school groups, hosting talks, workshops and events - including Gaelic language activities – and showcasing some of our collection. Whilst the Trust’s focus is the famous battle of 1745, we’re working with other heritage groups to ensure the facility serves as a valuable link to the wider historical story of Prestonpans. All this will provide increased momentum as we work towards our living history centre at Blindwells.”

The Battle of Prestonpans was the first major battle of the last Jacobite Rising. The battle took place on 21 September 1745. The Jacobite army loyal to King James Francis Edward Stuart and led by his son Charles Edward Stuart (Bonnie Prince Charlie) achieved a dramatic victory over the Redcoat army loyal to the Hanoverian king, George II, which was led by Sir John Cope. The battle took place in fields between Prestonpans, Tranent, Cockenzie and Port Seton in East Lothian. The victory was a huge morale boost for the Jacobites, and despite their ultimate defeat the following year, the battle left an important cultural legacy.

The Battle of Prestonpans (1745) Heritage Trust works to mark this historical legacy through interpretation of the battlefield site, including signage in English and Gaelic. In recent years the Trust has installed new monuments to the fallen, commissioned major tapestries, opened a micro-museum, and developed on-site and digital interpretation for the battlefield, whilst touring its exhibitions around the world. The Trust is working towards the launch of a world class living history centre on the battlefield site as a way of institutionalising this activity. The Trust’s events to mark the 275th anniversary in 2020 are now re-scheduled to take place in 2021 with a major re-enactment of the battle set to be the climax of the programme.

When opening the Town Hall in August 1897, then local MP Robert Haldane QC spoke about the importance of the Battle of Prestonpans before continuing:
"What is a Town Hall? It is a place in which the common spirit of those thrown together by a great common bond makes itself manifest. They could not keep such a spirit alive without some building in which that spirit might be manifest, and at last they have got it in this Hall, which is worthy of you as a Burgh.... It is now the Town Hall of Prestonpans and is open to us all. My wish and hope is that you might make a use of it worthy of the exertions which have called it into existence".

To find out more about The Trust or to register your interest as a volunteer, visit https://prestonpans275.org