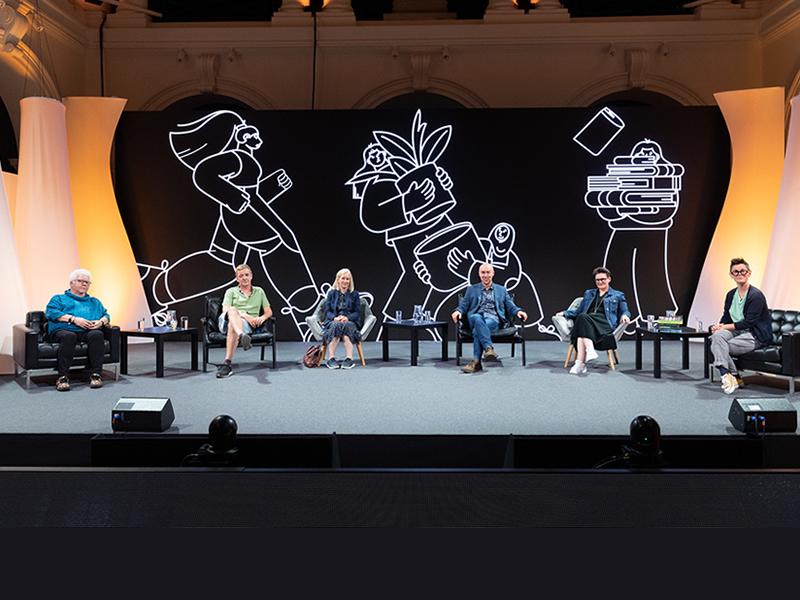 As the 2021 Edinburgh International Book Festival came to a close last night, organisers expressed their gratitude to authors, audiences and staff for having the courage to travel with them into unknown territory. The Book Festival’s new home at the University of Edinburgh’s Edinburgh College of Art was deemed to be a success, with a footfall of over 25,000 over the 17 days, including those who watched events streamed live onto the Big Screen in the Festival Courtyard. The Festival, which opened with an online performance from children’s author Julia Donaldson, concluded last night with Douglas Stuart in conversation with First Minister Nicola Sturgeon live, in person and in front of an audience in the New York Times Sculpture Court for his first appearance in Scotland since Shuggie Bain won the 2020 Booker Prize.

The Book Festival staged over 250 events with 300 authors this year in three studio theatre spaces. Events included exclusive book launches from Denise Mina, Pat Barker, Val McDermid and Ian Rankin all of whom appeared in person on stage in Edinburgh College of Art in front of a live, sell out socially distanced audience. Other In Real Life appearances included Devi Sridhar, Gordon Brown, Maggie O’Farrell and Joan Bakewell while Ali Smith, Salman Rushdie, Richard Flanagan, Marilynne Robinson and Cressida Cowell joined via zoom. All events were broadcast live through the Book Festival website and have already been viewed across 83 countries. Over 56,000 online and in person tickets were sold, a number which is increasing daily as audiences catch up by watching ‘on demand’.

Nick Barley, Director of the Edinburgh International Book Festival, said: “This year was a year of transition and experimentation. I am extraordinarily proud of the team that has conceived, programmed and delivered a festival under the restrictions and uncertainty that we experienced right up until the beginning of August. We were at the very forefront of live events coming back, and there was understandably a nervousness amongst many of our regular audience in coming together in the same space. As the Festival went on we saw visitors, and confidence, growing. The world is a very different place from when we all came together in 2019, however our new home in the Edinburgh College of Art, the beginning of a long-term strategic partnership with the University of Edinburgh, has allowed us to ease gently back into our Festival, and we are now in a good place to grow and build upon what we have learned. It is a time to look forward, not backwards, to consolidate and to celebrate not only what we have all achieved in this of all years, but also to take what we have learned and apply it to future Festivals.

“2021 was about bringing people back together in a safe space, building confidence amongst authors and audiences and reaching a new audience through broadcasting our events online. Feedback from visitors both here in Edinburgh and those watching from home has been positive and generous. We are already seeing our events garnering new audiences who are watching ‘on demand’ and we expect those numbers to grow significantly over the coming weeks.

“We are reimagining the Book Festival in this new climate. It will take time – the world has changed, and we need to adapt and learn from our experience this year, however we are already making plans for 2022 and from the public response to the digital programme we will definitely include an online offering as well as the live, in person experience here in Edinburgh.”

Participants in the Book Festival’s Citizen project, supported by players of People’s Postcode Lottery through the Postcode Culture Trust and through the PLACE Programme, enjoyed a community meal provided by Scran Academy which was followed by a showcase of readings, stories and short films. Irvine Welsh, Sara Sheridan and Ian Rankin were amongst the contributors reading from the new edition of One City and the Festival launched a new, self-guided walking tour, encouraging visitors to explore the history of Tollcross with members of the community living near the Festival’s new home in Edinburgh College of Art. Authors have delivered readings and workshops to Prison groups in HMP Edinburgh, HMP Kilmarnock and HMP Perth.

Almost all the events in the 2021 Edinburgh International Book Festival programme can be viewed online ‘on demand’ through the Book Festival website – edbookfest.co.uk.