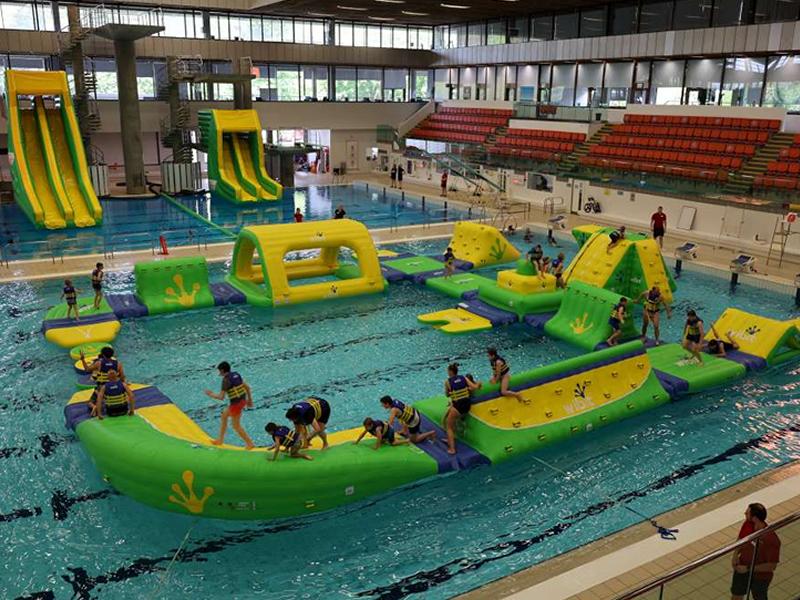 Calling all thrill seekers, Edinburgh Leisure is launching a new extreme element to AquaDash, its inflatable playground on water at the Royal Commonwealth Pool when it reopens on Saturday, 26 June 2021.

Two inflatable slides will be attached to the 3m and 5m diving platforms and will be available during some of the Saturday AquaDash sessions.

Launched by Edinburgh Leisure in February 2018, it was the very first in Scotland. Suitable for all fitness levels, AquaDash is the ideal activity for the full family to enjoy. Participants slide, climb, and bounce their way through thrilling challenges, beating each one and racing friends and family to victory. There is a bonkers bridge, slippery slide, wacky wiggle discs and adventurous action tower to name a few.

Customers aged 6 years can access AquaDash. There is no specific swim requirement although the activity is more enjoyable if participants have water confidence and some swimming ability.

Claire Rusack, Leisure Manager at Edinburgh Leisure said: “After the year everyone has had, AquaDash Extreme is sure to inject some excitement into life. AquaDash is fun but without the sun. Whilst we might not be blessed with wonderful continental weather, AquaDash promises all the excitement of an amusement water park but indoors in a safe environment that can be enjoyed by all family. And it promises a good workout at the same time.”

To ensure everyone remains safe, there have been some changes to the way AquaDash operates.

• The maximum number has been reduced from 45 to 25 to ensure appropriate distancing between adults.

• There will be a break of 15 minutes between sessions to enable sanitising of the course.

• Session times have been reduced from 50 minutes to 45 minutes to enable these changes.

AquaDash/AquaDash Extreme* will be available on the following days:

All sessions will need to be pre-booked and paid online. Customers will be able to book 28 days in advance (rolling booking date). Book on the Edinburgh Leisure app or website - https://www.edinburghleisure.co.uk/aquadash

Do you dare do the Dash?