Scotland’s iconic floating hotel has appointed its first ‘Wellbeing Manager’ as it gears up to welcome guests back onboard from Wednesday 22nd July. 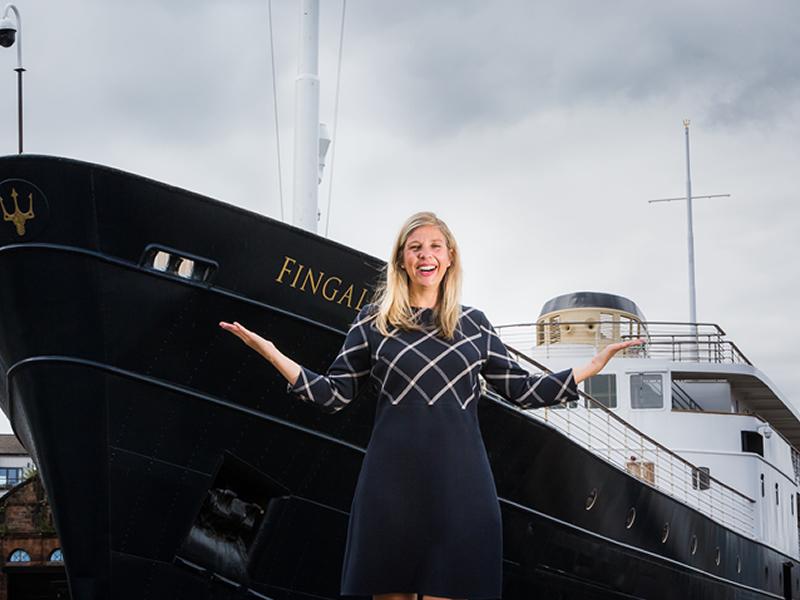 It’s all hands on deck for Mari-Nel Scorer and her fellow crew members as they make the final preparations to reopen Fingal, which is berthed in Edinburgh’s historic Port of Leith.

Mari-Nel, Fingal’s Front-of-House Manager, has taken on the additional role as Fingal’s first Wellbeing Manager to ensure that overnight guests, and local diners, continue to enjoy a unique, luxurious and seamless experience onboard.

This former Northern Lighthouse Board (NLB) tender was developed by the award winning team at The Royal Yacht Britannia. Following a £5 million transformation in 2019, now a world-class foodie destination with all the glamour and style of a superyacht, but with an air of old-world Art Deco luxury ocean liner elegance. Fingal proudly remains Edinburgh’s number one hotel on TripAdvisor and was also recently named ‘Best Newcomer’ at Scotland’s Prestige Hotel Awards 2020. Fingal has also been shortlisted by GQ Food & Drink Awards 2020 in the prestigious ‘Best Hotel’ category and is the only Scottish nomination.

As Fingal’s new Wellbeing Manager, Mari-Nel will work with guests to tailor the level of service contact that they are comfortable with. Mari-Nel and her crew will also personally escort guests to their cabin or dining table on arrival, providing expert advice on menu choices prepared by Fingal’s highly talented chefs in the custom built galley kitchen, which has been created in the ship’s former fuel tank.

Mari-Nel will also facilitate the exclusive use of the private dining areas on board, including The Bridge and the Skerryvore Suite. Both with an unmistakable air of romance, and unparalleled views of the bow of the ship. A great spot for a private family celebration.

Fingal’s 23 luxury cabins are each named after Stevenson lighthouses, inspired by Fingal’s rich maritime heritage. The ship is now the ultimate in luxury accommodation and dining with a nautical twist.

Commenting on the development of her role, Mari-Nel, said:
“I’m extremely proud to have been appointed Fingal’s first Wellbeing Manager to ensure that all our guests continue to enjoy a relaxing and truly unique experience on board.

“We’ve introduced some small changes to help guests feel more at ease while eating out in public again, but our core dining experience, luxury cabins and values remain reassuringly unchanged. We will continue to reinforce our world-class reputation as one of Scotland’s most iconic hotels and foodie destinations.

“A choice of more intimate and flexible guest experiences are now available for small pre-booked groups, including private dining booths in our restaurant, exclusive use of The Bridge and our Skerryvore Suite with private deck and dining for couples. Whatever our guests request, we will go above and beyond to deliver.”

Head of Fingal, Andrew Thomson, said: “Fingal has gone from strength to strength since launching in January 2019 and we look forward to continuing that legacy as we welcome our guests back on board once again.

“We wish Mari-Nel every success in her additional role as our first Wellbeing Manager. As we reopen our doors, we hope to reinforce Fingal’s reputation for outstanding service and a truly world-class guest experience delivered by Mari-Nel and our dedicated crew.”