Scotch liqueur crowned king of the castle in Edinburgh

Scotland’s leading Scotch malt whisky cream liqueur, Magnum, has been crowned one of the top selling products at Edinburgh Castle after smashing its annual sales target. 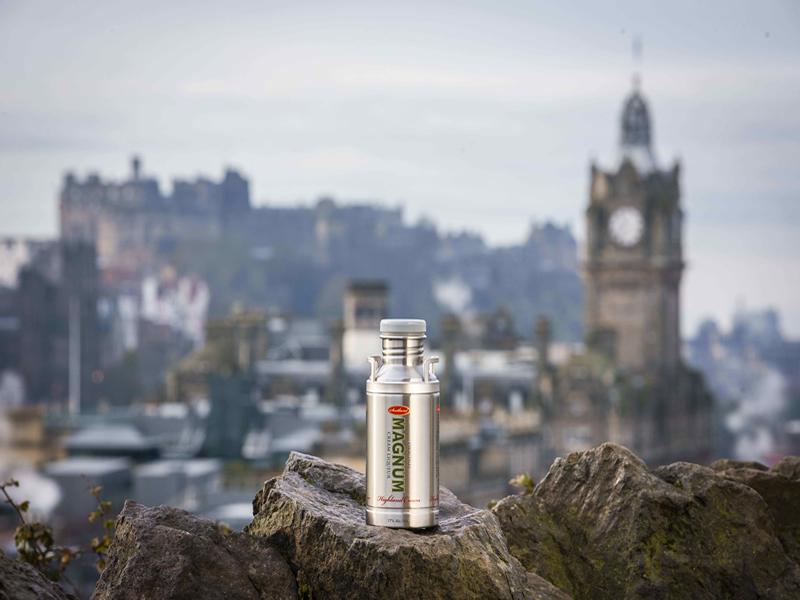 Scotland’s leading Scotch malt whisky cream liqueur, Magnum, has been crowned one of the top selling products at Edinburgh Castle after smashing its annual sales target.

Over 1,000 cases (12,000 bottles) of Magnum have been snapped up by visitors to the historic landmark between January and November 2019 alone.

Magnum’s superior ingredients and contemporary design have set it apart from traditional liqueurs as a fusion of only single malt Scotch whisky and cream.

Crafted and bottled in Edinburgh, Magnum has quickly established itself as the tipple of choice amongst international and domestic visitors alike, who are attracted to its delicious taste and local Edinburgh provenance.

Magnum is contained in a unique, stainless steel flask, which is designed to be reusable and recyclable. The innovative packaging also keeps the liqueur chilled at the optimum temperature, without the need for ice.

Commenting on Magnum’s sales success at Edinburgh Castle, Magnum Director, Lee Schofield, said: “It’s fantastic to see Magnum going from strength to strength and proving a big hit with visitors from all over the world.

“We’re really grateful to Historic Environment Scotland who have continued to support Magnum at Edinburgh Castle over the last three years and enabled us to introduce Magnum to a new international audience. Our weekly free tasting events at the castle have been a great way for people to get a taste for our brand for the first time.

“At Magnum we put Scottish provenance at the core of what we do. The result is a luxurious and unique premium cream liqueur, containing only the highest quality cream and the finest single malt scotch whisky.

“We’re now gearing up for the Christmas rush as Magnum is fast becoming a popular festive tipple and seasonal gift.”

Edinburgh-based Hemisphere Brands is the global brand agent for Magnum and manage the brand from production planning through to the strategy for market entry, as well as executing the sales, marketing and distribution plan. The company is currently focusing on three of the world’s largest cream liqueur markets - UK, Canada and South Africa.

In addition to Edinburgh Castle, Magnum is also available to purchase online at www.magnumcreamliqueur.co.uk, with free delivery anywhere in the UK. A range of 5cl miniatures, 50cl, 1 litre and 1.75 litre bottles are also on offer.