Last night, the great and the good of Scotland’s foodie scene were invited to discover culinary secrets from the recently opened Surf & Turf restaurant at Macdonald Holyrood Hotel. 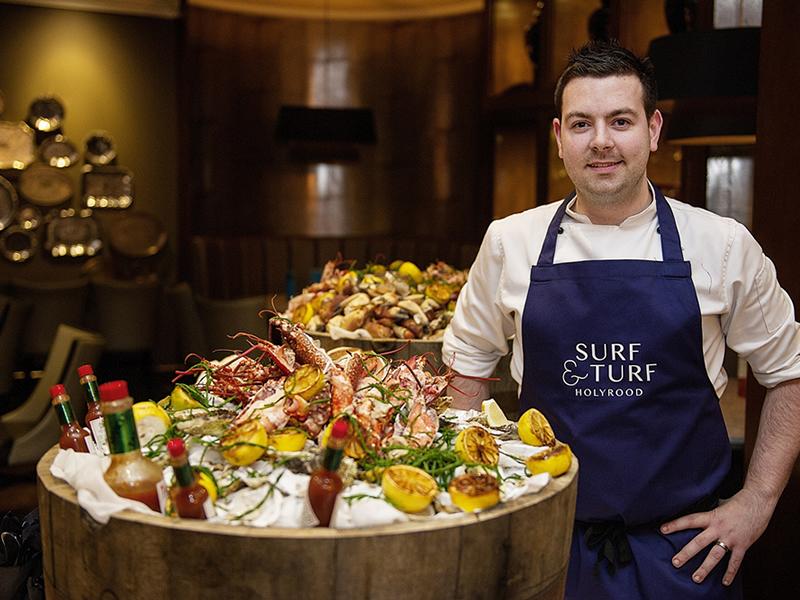 Last night, the great and the good of Scotland’s foodie scene were invited to discover culinary secrets from the recently opened Surf & Turf restaurant at Macdonald Holyrood Hotel.

The concept, which is inspired by Scotland’s larder, was rolled out at the impressive Edinburgh hotel in the summer after receiving rave reviews at the sister Macdonald Rusacks Hotel in St Andrews.

For one night only the restaurant was transformed into an urban food market to showcase some of the fresh, locally sourced, ingredients from the menu.

More than 100 guests also had the chance to explore the culinary crafts used to prepare the finest dishes from land and sea. The four-star hotel partnered with Scotland’s premier food suppliers, George Campbell & Sons and ScotBeef, to create interactive masterclasses that reveal some of the industry’s best kept secrets from the perfect way to shuck an oyster, to filleting a fish and preparing a hindquarter of beef.

The event also marks the 20th year of the Macdonald Holyrood Hotel, which is situated in Edinburgh’s historic and beautiful old town, just minutes from the world-famous Royal Mile and Scottish Parliament building.

Marco Truffelli, Macdonald Hotels & Resorts managing director for Scotland, said: “The Surf & Turf restaurant has received phenomenal feedback, and we wanted to do something extra special to cement its opening here in Edinburgh.

“Working with our suppliers, we were able to transform the whole restaurant into a culinary heaven, taking inspiration from traditional fish and meat markets.

“Provenance of ingredients is crucial to our offering and it was a delight to share the journey of our dishes with the city’s biggest foodies and friends of the hotel.”

Throughout the menu, tremendous care is put into where and how the ingredients have been produced. All meat is from the UK, with beef matured for at least three weeks.

“Our menus are driven by a blend of constant experimentation and passion. The creative freedom we are afforded allows us to deliver unique recipes using quality local produce.

“I’ve been passionate about food since I was a wee boy. But I was never picky and loved all good, tasty, high-quality, lovingly created food. That’s why I fell in love with the surf and turf concept – it’s the best of both worlds. The tastes and textures of succulent steak and fresh seafood complement each other perfectly."

To book, visit https://www.macdonaldhotels.co.uk/our-hotels/scotland/edinburgh/macdonald-holyrood-hotel-and-spa or phone 0344 879 9028 .

RZSS is thrilled to say that one of their Highland Wildlife Park team was Highly Commended in the annual BIAZA photography competition.

Edinburgh Council has begun a three-stage phased plan for the reopening of its libraries and community centres, with the second and third stages being subject to committee approval.

Harvey Nichols, Edinburgh is delighted to announce that Forth Floor dining will return on Wednesday 29th July.