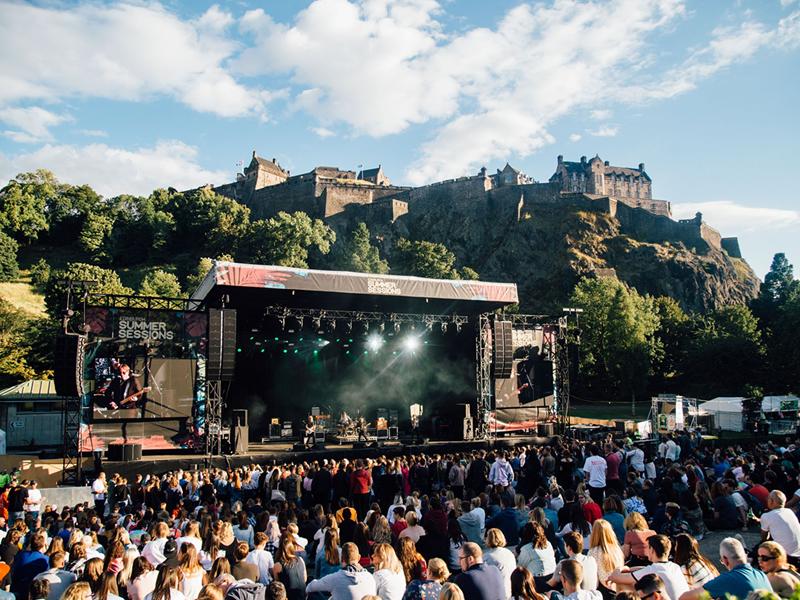 DF Concerts today announce exciting additions to a world class festival line up for 2019’s Summer Sessions in Edinburgh, adding The Ninth Wave (CHVRCHES support), Fatherson and Get Cape. Wear Cape. Fly (James support) plus Self Esteem (Florence + the Machine support) to the bill as nine unforgettable gigs will take place in the capital this summer. Fans and artists alike will experience a once in a lifetime show, with the stunning backdrop of Edinburgh Castle in Princes Street Gardens, during Edinburgh International Festival.

Expertly mixing 80s new wave and goth pop with guitars, synths and pop melodies, The Ninth Wave, are a band like no other on the Scottish music scene. Formed through band members meeting on Glasgow’s musical Sauchiehall Street, the four-piece released the first half of their debut album ‘Infancy’ earlier this month with the second half due later this year. Garnering airplay on BBC Radio 1 and playing festivals from The Great Escape to TRNSMT to South by South West, The Ninth Wave can now add Edinburgh Summer Sessions to their very own history books, making their festival debut joining fellow Scots CHVRCHES and We Were Promised Jetpacks on 11th August 2019.

Indie rockers Fatherson make for an incredibly exciting addition to 2019’s Edinburgh Summer Sessions as they join James at Princes Street Gardens on 15th August. The Ayrshire trio have toured with bands like Biffy Clyro, Frightened Rabbit, Twin Atlantic and Idlewild, and are no stranger to festival season, bringing their soulful genre-defying music to TRNSMT last summer. Releasing their third album ‘Sum Of All Your Favourite Parts’ to acclaim in 2018, a Fatherson set beneath Edinburgh Castle is sure to be unforgettable.

Described by MTV as a ‘once in a generation talent’ singer songwriter Self Esteem joins the incomparable Florence + the Machine for two shows at Edinburgh Summer Sessions on 7th and 8th August. Fronted by Rebecca Taylor, Self Esteem mixes modern pop with R&B to provide her fans with out and out bangers on her debut album ‘Compliments Please’, released in March this year. Her effortlessly unique melodies blend with raw, and sometimes brutal, lyrics making for a vivid and poptastic record. With 8th August already sold out, fans should snap up tickets now to see two trailblazing women in music take to the Edinburgh Summer Sessions stage on 7th August.

Get Cape. Wear Cape. Fly aka Sam Duckworth, will bring his captivating, acoustic melody to the capital having been added to the bill, joining James and Fatherson on 15th August for a jam-packed night of music under the stars. Proclaimed as one of Britain’s ‘most compelling political songsmiths’ by The Independent, the singer songwriter has released six albums under his moniker and collected fans across the world with his unique storytelling song writing style.

Summer Sessions in Edinburgh is set to be a real highlight of 2019’s music calendar with sold out shows from Courteeners and Lewis Capaldi, and headline sets from Florence + the Machine, Primal Scream, CHVRCHES, James and Madness underneath Edinburgh Castle in Princes Street Gardens. The festival is as exclusive chance to catch some of the world’s biggest artists in an intimate setting at an iconic landmark.

Part of the Summer Sessions Festival family, Edinburgh’s event will open up proceedings for Glasgow’s tremendous series of festival dates starting on 16th August with a Scottish return by The Cure who are joined by a huge line-up featuring Mogwai, The Twilight Sad and The Joy Formidable. A sold-out show from the Foo Fighters is on the cards in Glasgow’s Bellahouston Park on 17th August, followed by the outstanding The 1975 who will be joined by Twin Atlantic, You Me At Six, Pale Waves, Ten Tonnes and No Rome on 25th August, rounding off a huge summer of music for Scotland.