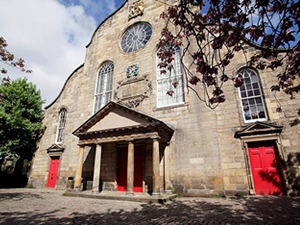 Canongate Kirk is the parish church of Canongate in Edinburgh’s Old Town and a congregation of the Church of Scotland.

The parish includes the Palace of Holyroodhouse, the Scottish Parliament, and Edinburgh Castle.

The church was founded in 1688 and completed in 1691. The master mason in charge was James Smith. A plaque on the front of the church bears witness to it having been built through a large bequest from a local merchant.
“In 1688 King James VII ordained that the Mortification of Thos. Moodie, granted in 1649 to build a Church, should be applied to the erection of this structure”

Architecturally, the Kirk has a Dutch-style end gable and a curious, small doric-columned portico over the entrance. Although outwardly rectangular, the Kirk’s interior has a cruciform layout (highly unusual for a post-Reformation, pre-Victorian Church of Scotland building). The Kirk’s interior was extensively remodelled in 1882, with the inclusion of a pipe organ and a central pulpit. These unsympathetic alterations were removed in the early 1950s, along with the galleries. The resulting reordering considerably increased the levels of light; the original dignified simplicity of the Kirk was able to be appreciated once more. The Kirk was further restored in 1991 by the Stewart Todd partnership, followed by the installation of a new Danish-built Frobenius pipe organ in 1998, in memory of the late Very Rev Dr Ronald Selby Wright. This was the 1000th organ to be built by the Frobenius company.

The Canongate kirkyard is the resting place of several Edinburgh notables including the economist Adam Smith, the philosopher and Smith’s biographer Dugald Stewart, Agnes Maclehose (the “Clarinda” of Robert Burns), David Rizzio, the murdered private secretary of Mary, Queen of Scots, and the poet Robert Fergusson, whose statue in bronze by David Annand stands outside the kirk gate. Bishop James Ramsay is also buried here.

All information (whether in text or photographs) is supplied in good faith but should not be relied upon as being a statement of representation or fact. We take every opportunity to ensure the details for Canongate Kirk are accurate, please contact us at hello[@]whatsonnetwork.co.uk if any of the above information is incorrect.

Sorry, but we have no upcoming events for Canongate Kirk. If you know of an event taking place at Canongate Kirk or anywhere else in Edinburgh tell us about it and we'll list it on the website, for free!

More in Edinburgh
Sorry, but we have no additional listings available for Edinburgh.
If you would like to be included, fill out our online form here »