Vancouver based indie-pop outfit Peach Pit bring their From 2 to 3 Tour to the UK in 2022, catch them live at the Liquid Rooms on 12th May! 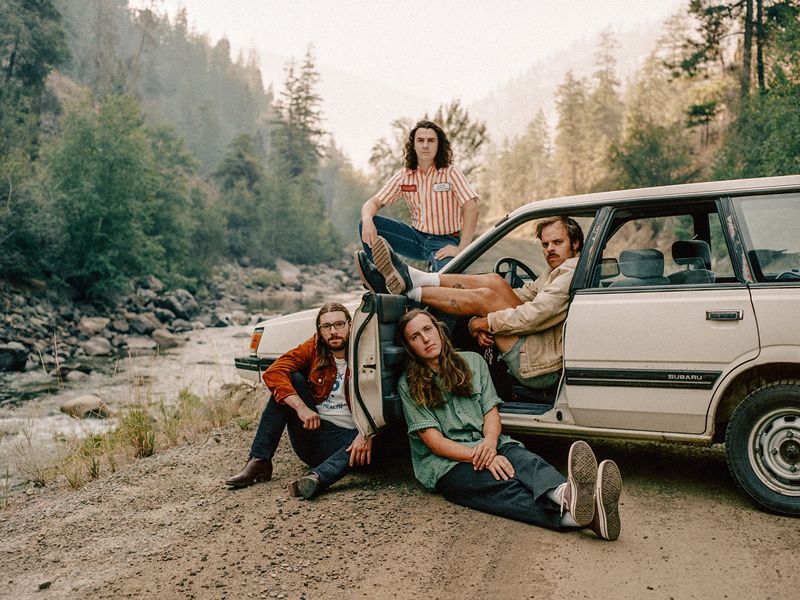 Through bad breakups, bouts of loneliness, existential crises, and even Pandemics, true friends stick around. Instead of bending and breaking, their bonds crystallize in the roughest of rough patches. If friendship had a sound, it would be Peach Pit.

The wistful grooves, glassy guitars, and sun-kissed melodies feel like they could only be made by musicians who have spent close to a lifetime (or at least half of their lives) together. The Vancouver quartet—Neil Smith [vocals, guitar], Chris Vanderkooy [guitar], Peter Wilton [bass], and Mikey Pascuzzi [drums]—trace their union back to high school.

During 2016, they served up the self-titled single, “Peach Pit,” eclipsing north of 100 million total streams counting. The group continued to gain traction with their 2017 full-length debut, Being So Normal. Among many highlights, “Tommy’s Party” and “Alrighty Aphrodite” both surpassed 50 million Spotify streams as they graced the bills of festivals such as Shaky Knees Festival, Bonnaroo, Firefly Festival and many more. In 2020 Peach Pit revealed You and Your Friends, which DIY Mag hailed as “12 tracks of infectious indie-pop gems” while Atwood Magazine described the band as being “at the cutting edge of the alternative music scene.”

Carrying this momentum into 2021, they kick off the next chapter of the band and their friendship with the single “Up Granville.”

Other Events at The Liquid Room

Alex G is coming to The Liquid Room, Edinburgh on Tuesday 23rd August for a special Fringe show!
Read more

Don't miss an evening with the star of RuPaul's Drag Race Adore Delano when she brings her Party Your World global tour to Edinburgh's Liquid Rooms on 2nd September!
Read more

The Bohemians: A Night of Queen

Don't miss internationally renowned Queen Tribute band 'The Bohemians' as they take you on a high energy roller coaster ride of a concert at The Liquid Room on Saturday 3rd September!
Read more

The mighty Machine Head are touring again in 2022 with a date at The Liquid Room on Tuesday 6th September.
Read more

Scottish new wave band Altered Images are heading out on tour in support of their new album, Mascara Streakz, catch them live at the Liquid Room on 8th September!
Read more

Desperados deliver a rip roaring set from the outstanding back catalogue of one of the greatest band's in history, The Eagles!
Read more

Goodbye Mr MacKenzie will be at the Liquid Rooms on Friday 21st October for a very special gig!
Read more

From The Specials - Neville Staple

In support of their new self-titled album, the fast-rising LA trio MUNA have announced a nationwide tour for this November including a night at the Liquid Room on the 16th!
Read more

Scottish singer-songwriter Nina Nesbitt is on a UK & European headline tour in November with a date at The Liquid Room on the 23rd!
Read more

Ruts DC have announced a UK tour in 2022 with a date at The Liquid Room on Friday 25th November.
Read more

Stereolab have announced a UK tour including a date at The Liquid Room on Monday 28th November!
Read more

Get dressed up, warm up those vocal chords and join in the fun in this huge David Bowie extravaganza when Absolute Bowie play The Liquid Room on 10th December!
Read more