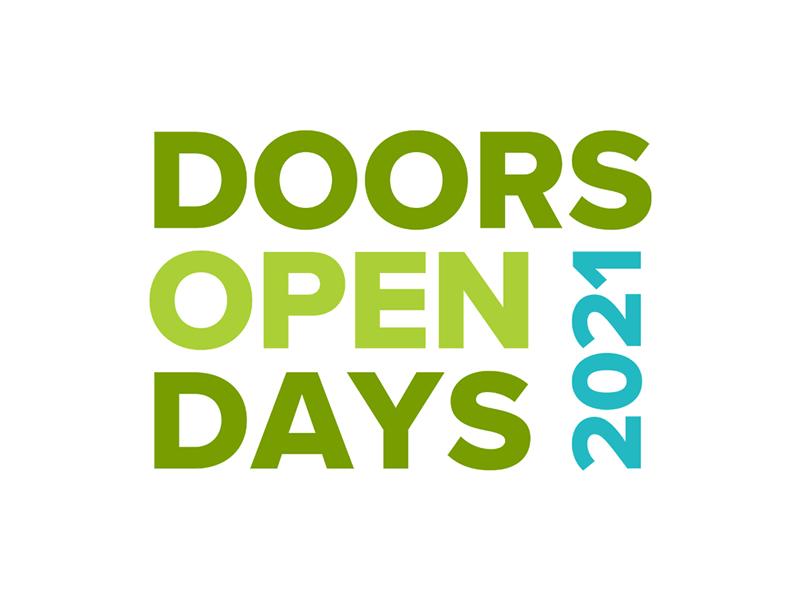 Doors Open Days is Scotland’s largest free festival that celebrates heritage and the built environment. It offers free access to over a thousand venues across the country throughout September, every year.

Information about the national programme, including event listings, can be found at www.doorsopendays.org.uk.

Blackburn House
11-12 September 2021
Now owned by Scottish Historic Buildings Trust (SHBT), the house was built in 1772 by George Moncrieff, a merchant who had made his fortune in the West Indies. Two hundred years later, it fell derelict and remained that way for over 25 years. Thanks to SHBT, it was restored and brought back into use in 2008, winning the Georgian Group's Best Restoration of a Georgian Country House Award.

Boghall Parish Church
11-12 September 2021
The building of this dramatic modern church by Wheeler & Sproson was started in 1960 and completed in 1965. The sanctuary seats 400 and has a unique hyperbolic paraboloid roof finished internally with timber. Windows with plain coloured glass between the roof and the walls light the interior.

East Calder Waste Water Treatment Works
11-12 September 2021
East Calder Wastewater Treatment Works (WwTw) is located north of East Calder, on the banks of the River Almond. It treats the wastewater from the population equivalent of 100,000 people in the local area and is operated by Veolia on behalf of Scottish Water. It is open for organised tours on Doors Open Days. The primary focus of the works is to treat the wastewater produced by local communities so that is can safely rejoin the water cycle. However, it is also contributing to Scotland's circular economy, with the organic material removed being used to generate biogas which in turn generates green energy that can be exported to the national grid.

Hopetoun House
11-12 September 2021
Designed by Sir William Bruce and then remodelled and extended by William Adam, Hopetoun House is one of the finest examples of 18th century architecture in Britain. It is a Category A Listed building. The magnificent interiors which have remained virtually unchanged for three centuries reflect the elegance of the Georgian era and are decorated with the best period furniture, paintings, tapestries and clocks, with beautifully crafted finishes of carving, gilding and plaster work. The house has been home to the Hope Family since the late 1600’s and the present Lord Hopetoun and his family still live in Hopetoun House.

Kirk of Calder
11-12 September 2021
A church has believed to have existed on the present site since around 1150 and formally consecrated in 1241. The oldest part of the present Church was built on the original site in 1542 and the west extension added in 1863. The oldest gravestone in the churchyard is dated 1636, and the organ is by James Conacher 1888. The church is Category A Listed and the restoration won the West Lothian Award for Conservation in 1992. The stained glass windows were restored in 1995. Previous famous visitors have included John Knox, James ‘Paraffin’ Young, David Livingstone and Frederic Chopin.

Linlithgow Canal Centre
11-12 September 2021
This is an opportunity to visit the Canal Museum, tearoom, yard and wharf, also the workshop of the Linlithgow Union Canal Society and the Mel Gray Education Centre. Built c. 1820s (probably Hugh Baird, Canal Engineer), a visit to the Canal Centre as a whole (Category C Listed) recalls the heyday of the Union waterway (Edinburgh-Falkirk), not yet challenged by the Edinburgh and Glasgow Railway (1842). The Canal Centre is a simple vernacular building, originally two stables to the east end and two cottages at west end, and is an important surviving part of the infrastructure of Scotland's last major canal. The Museum is recognised by Scottish Government and remains Scotland's only specific canal museum.

Linlithgow Museum
11-12 September 2021
Built in 1935 in neo classical style and officially opened in 1940 (J Walker Todd of Dick, Peddie and Todd), the Category B Listed building was originally designed as the local County Builidings reflecting Linlithgow's status as the "County Town" in what was to become West Lothian. Most of the Council's functions were moved to Livingston in 2009 and the building was then converted into the Linlithgow Partnership Centre (latterly to become Tam Dayell House). Linlithgow Museum moved there from Annet House in 2019. Mary, Queen of Scots, the Battle of Linlithgow Bridge, the world’s first assassination of a Head of State by firearm: there’s a lot to discover in Linlithgow’s new museum. Its three galleries will help you explore Linlithgow’s royal connections, understand its industrial past and learn what ‘Life by the Loch’ was really like.

Livingston Village Kirk
11-12 September 2021
The earliest surviving records of a church at Livingston are from the second quarter of the 12th C. The date of the present building is uncertain but is possiblly as early as the 16th C. There is a date stone inscribed as "rebuilt 1723". The building is Category B Listed and benefitted from a significant refurbishment in 2010. The interior has been much modified over the years. The pews date from the 18th C and the puilpit is Victorian. There are several interesting headstones in the kirkyard dating from the 17th and 18th C.

St Michael's Parish Church
11-12 September 2021
One of the finest parish churches in Scotland, St Michael's (first dedicated in 1242) dates from the same period as the neighbouring Linlithgow Palace. Largely rebuilt after 1424, with later alterations, it has always remained the local parish church. Category A Listed.

St Ninian's Craigmailen Parish Church
11 September 2021
This is a fine example of a mid-Victorian gothic church. The congregations of St Ninian’s and Craigmailen came together in 1954. Their conjoined histories go back much further, to 1738, and embrace the debates which defined the Seceder, United Presbyterian, Free and United Free denominations of former times.

St Peter's Scottish Episcopal Church
11-12 September 2021
Built in 1928 as a Memorial to George Walpole, Bishop of Edinburgh and his wife Mildred, with assistance from Missions in England and USA. It is designed as a miniature Byzantine basilica with a ‘Cross in the Square’ plan form, a high central dome and half dome over the sanctuary apse. This gem of a church featured in “Tiny Churches” (Dixe Wills, 2016) and is Category B Listed. For the founders of the congregation a century ago, the final repeal of 'religious disabilities' was almost within memory. The new 2018 extension to the rear, into a steep gradient, provides modern facilities.

The Linburn Centre
11-12 September 2021
Built in 2011 (Page & Park), The Linburn Centre is a free day-facility providing leisure and social activities, advice, emotional support and training opportunities for visually-impaired ex-servicemen and women. It is operated by Sight Scotland Veterans (formally the Scottish War Blinded). The building, its design linked to a Chinese celestial phoenix, received several awards including the RICS Building Project of the Year Award in 2012. The light and spacious floorplan, with colour-coded décor, allows blind and visually-impaired members to navigate more easily. Members’ activities include arts & crafts, woodwork, archery, IT, abseiling and tai-chi. Scottish War Blinded’s outreach service enables members to remain independent in their own homes throughout Scotland.

Uphall South Parish Church
11 September 2021
The land on which the church stands was sold in 1894 by Sir John Pender GCMG. of Middleton Hall to Broxburn Free Church to build a Mission Hall in Uphall. By 1926 the congregation had outgrown the existing premises and the present day building was erected in front of the old one which became the church hall. In 1929 the nationwide union of the United Free Church and the Church of Scotland led to the church becoming Uphall South Parish Church.

Join us at Edinburgh Castle for a number of gun salutes throughout the year. Each gun salute, unless otherwise stated, takes place at 12 noon.
Read more

This four hour, short printing course knows no bounds and only cares about you creating something special and going home with something beautifully wearable.
Read more

Balerno Farmers Market is held on the 2nd Saturday of every month on Main Street between 9am and 1pm.
Read more

Come along to Newhailes monthly market where you'll find a fine selection of handmade goods; from jams and chutneys to pies and candles!
Read more

Come along on a guided walk to learn more about Arthur's Seat's turbulent past, created by fire and ice!
Read more