Love Actually will once again be screened live across the UK with a full orchestra performing its enchanting score – just in time for Christmas! 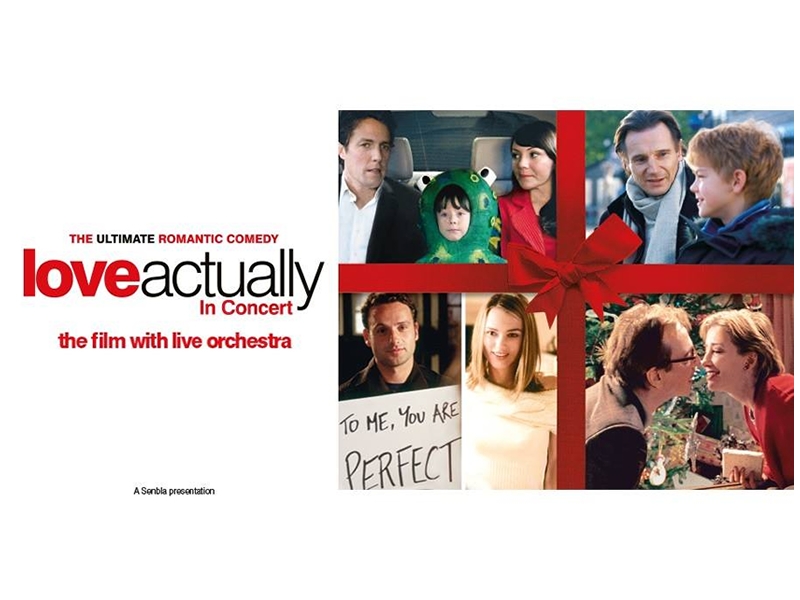 About Love Actually In Concert - Film With Live Orchestra

Love Actually, the star-studded rom-com that has become a Christmas classic, will tour the UK in winter 2022 with a full orchestra performing its soundtrack live to screen.

Love Actually In Concert is becoming an annual festive tradition for many, having garnered sold out audiences in previous years, with the Bournemouth Echo commenting ‘… the whole performance was simply spectacular, enhancing the magic of this classic Christmas movie tenfold’, and the York Press stating in its 5-star review ‘The live orchestra works to enhance this experience - and what a joyful one it is.’

Directed by Richard Curtis and originally released in cinemas in 2003, Love Actually tells ten separate, yet interweaving stories of love around Christmas time.

A full, live orchestra will perform Craig Armstrong’s evocative score at these shows, with the film being projected onto a huge screen. Armstrong is one of the UK’s most recognised film composers, with his work being awarded a BAFTA for his Achievement in Film Music.

An Evening with David Sedaris

David Sedaris will take An Evening With David Sedaris across the UK and Ireland in summer 2022. Catch him live at the Usher Hall on Sunday 10th July!
Read more

And In The End

The Royal Liverpool Philharmonic Orchestra and The Bootleg Beatles bring a celebration of 50 years of Abbey Road and Let It Be to the Usher Hall on Friday 16th July 2021!
Read more

Sir Donald Runnicles conducts this concert performance of Beethoven's only opera, telling a moving story of a wife's devotion and the resilience of human nature.
Read more

One of the world’s greatest pianists covers three centuries of music in this wide-ranging solo recital.
Read more

Journey into the unknown with musical pioneer Jordi Savall, his Hespèrion XXI ensemble and guests, in a concert inspired by the 14th-century Islamic scholar Ibn Battuta.
Read more

The LSO and Sir Simon Rattle return for a concert including the world premiere of Daniel Kidane's new piece, co-commissioned by the International Festival.
Read more

Multi-award-winning Australian World Orchestra make their Festival debut with maestro Zubin Mehta, who returns for the first time in over 40 years.
Read more

Czech Philharmonic and Semyon Bychkov are joined by dazzling pianist sisters Katia and Marielle Labèque for a powerful evening of music by Martinů and Janáček.
Read more

Semyon Bychkov and the Czech Philharmonic appear together at the International Festival to play the symphonic masterpiece, Mahler's Seventh Symphony.
Read more

Join the Philadelphia Orchestra and their Music Director Yannick Nézet-Séguin for the launch of their residency with Beethoven's visionary Ninth Symphony.
Read more

Join Sir Andrew Davis and the RSNO for the finale of the 2022 International Festival with music to exhilarate, invigorate, calm and console.
Read more

Fleet Foxes are on tour in 2022 with a date at the Usher Hall on Tuesday 30th August!
Read more

No Such Thing As A Fish - QI Podcast Live

The UK’s top podcast, No Such Thing As A Fish, is back on the road, with its first tour since 2019! Catch it at the Usher Hall on Friday 2nd September!
Read more

Adam Kay: This Is Going to Hurt…More

Award-winning writer and comedian Adam Kay has announced This Is Going to Hurt…More, it's his biggest UK tour to date and begins at the Usher Hall on 7th September!
Read more

This is your chance to see your childhood sweethearts perform their nineties nostalgia anthems at Usher Hall in Edinburgh on Sunday 2nd October!
Read more

The legendary 10cc have announced a mammoth 25-date UK tour for Autumn 2020 and stop off at the Usher Hall in October 2022!
Read more

Maxim Emelyanychev, widely respected for the power and energy he brings to period performances, conducts the combined forces of the SCO and the SCO Chorus in Haydn's life-affirming choral masterpiece!
Read more

Two of the world’s biggest bands, Boyzone and Westlife, come together for the very first-time featuring Brian McFadden and Keith Duffy! Catch Boyzlife at the Usher Hall on 8th October!
Read more

Pink Martini will celebrate an incredible 25 years since they first began with a very special Silver Jubilee Tour and come to the Usher Hall in October 2022.
Read more

Will Young has announced his 20th anniversary tour across the UK in 2022 including a night at the Usher Hall Edinburgh on Sunday 16th October!
Read more

Don't miss Pavement, widely renowned as one of the most popular and influential bands to come out of the American underground in the last three decades, at the Usher Hall on 19th October 2022!
Read more

Angel Olsen heads out on a UK and Ireland tour in support of ‘Big Time’ in October with a date at the Usher Hall on the 20th!
Read more

Whitney Queen of the Night

Direct from The West End, experience the ultimate Whitney Houston tribute show as it tours across the UK and stops off at the Usher Hall on 25th October 2022!
Read more

Join Ladysmith Black Mambazo as they celebrate the life and music of their founder Joseph Shabalala in this concert at the Usher Hall on 2nd November 2022!
Read more

British music legends Squeeze have announced they will bring their 'Food For Thought' tour to the Usher Hall on 9th November with support from special guest Dr John Cooper Clarke!
Read more

Great British Bake Off star Paul Hollywood is hitting the road with a brand-new tour for 2022. Catch him at the Usher Hall on Saturday 12th November!
Read more

Iceland's Sigur Ros have announced that they will bring their World Tour to Edinburgh's Usher Hall on Tuesday 15th November!
Read more

Disney's The Muppet Christmas Carol is live in concert across the UK this winter, featuring its musical score performed live to the film! Don't miss it at the Usher Hall on 29th November!
Read more

Conductor and harpsichordist Richard Egarr is joined by six brilliant soloists and the SCO Chorus for this gripping, galvanising choral masterpiece!
Read more

With a little help from their own orchestral ensemble, and featuring a special set to mark the 50th anniversary of Let It Be, this show is an absolute must-see for Beatle-maniacs of all ages.
Read more

Following a sell-out UK Tour, Collabro, the world’s most popular musical theatre vocal group, have announced a dazzling new tour for 2022 with a date at the Usher Hall on 11th December!
Read more

Ocean Colour Scene are back in Scotland in 2022 with a date at the Usher Hall on Tuesday 20th December!
Read more

Come and join the celebrations as the SCO marks the arrival of 2023 in style – with music to lift the spirits and seduce the senses.
Read more

The Elvis Years - The Story of the King

The Elvis Years is an outstanding musical production which brings to the stage the incredible and compelling story of the ‘king of rock and roll’ - Elvis Presley.
Read more

Randy Newman has announced a series of international ‘An Evening With Randy Newman’ tour dates including a night at the Usher Hall on 17th February!
Read more

Belinda Carlisle embarks on a 16-date UK tour in winter 2023 to mark 35 years as a solo artist and stops off at the Usher Hall on Saturday 18th February!
Read more

Queen Extravaganza, the official Queen tribute band produced by Roger Taylor and Brian May, return to the UK in 2023 and the tour comes to the Usher Hall on 21st February!
Read more

Spend an evening with Mendelssohn the magician – creator of sunny, carefree worlds, and of spectacular Shakespearean evocations – in the company of Maxim Emelyanychev and the SCO!
Read more

George Frideric Handel was a superstar composer in 18th-century London. But he saved his most extravagant offerings for royal occasions, creating music expressly conceived to impress and astonish.
Read more

Mike & The Mechanics have announced their 'Refueled!' 2023 Tour, an epic run of 34 UK concerts including a night at the Usher Hall, featuring all the hits and a drop of Genesis!
Read more

Midge Ure & Band Electronica are delighted to return to the road with the 'Voice & Visions' tour! Catch them live at Edinburgh's Usher Hall on 19th May!
Read more

Camel has been a fixture on the scene since the young group formed in the early 1970s, and they are coming to Edinburgh's Usher Hall to celebrate 50 years strong!
Read more

Considered a tour-de-force of editing, featuring excerpts from over 700 films, Paris 1900 is a fascinating glimpse of a bygone era. Screening at Summerhall on selected dates!
Read more

Intense, mesmerising, energetic and a powerful ode to life and art – this is an inspiring documentary, unmissable. Catch it at Summerhall as part of the Screen Horizons programme!
Read more

Saint Frances, screening at Grassmarket Picture House on 6th July, is a punkishly inventive black comedy of manners, taking a sideways look at what constitutes a modern American idea of womanhood.
Read more

Paul Schrader’s last film, First Reformed, addressed the climate crisis and it’s impact on our souls. In this film the attention is turned to the legacy of the war on terror.
Read more

In a World is an ingenious and deeply personal film that rarely misses a comic beat. Catch it at Grassmarket Picture House on 20th July!
Read more

Winning the Oscar for Best Original Screenplay, 'Belfast' has proven to be one of the box office successes of the immediate post-pandemic period. Screening for Free at Grassmarket Picture House!
Read more

Adventure Cinema is back with a bang and coming to Dalkeith Country Park from 12th to 14th August!
Read more

Edinburgh International Festival: The Ballad of A Great Disordered Heart

Discover Edinburgh's Little Ireland in this filmic exploration of the community through traditional music at Filmhouse on 15th August!
Read more