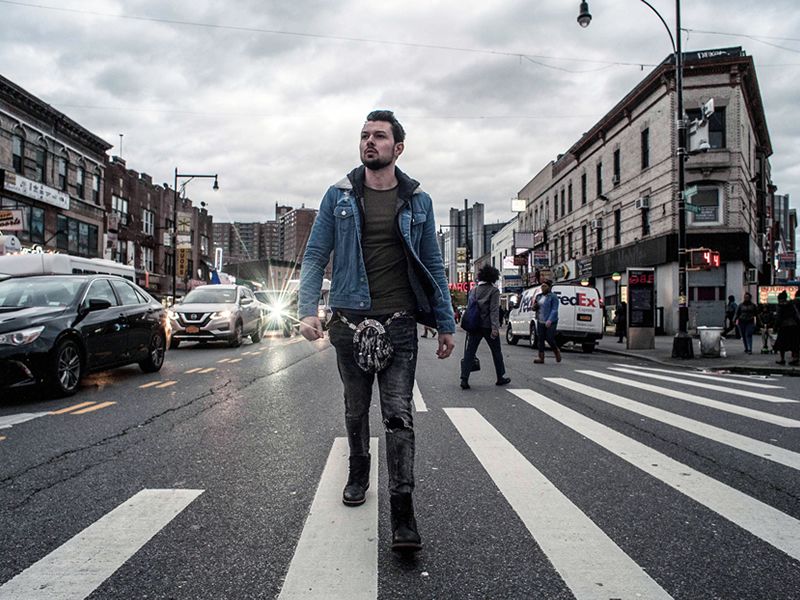 FORMER boxer and now hip hop star Stevie Creed has described how he used his Scottish Survival Kit to stay safe while he was a teenager living alone in some of the toughest neighbourhoods of New York.

He reckons his Edinburgh accent and daredevil attitude he developed growing up in the city helped him make friends in the Black community who adopted him as one of their own.

And his quick-thinking Scottish chutzpah got him out of a few scrapes when he was being robbed at gunpoint by gangs of young hoodlums, in Brooklyn.

In his newly-published autobiography – The Brooklyn Scotsman – Stevie tells the amazing story of how, when he was only 19, he flew out of Edinburgh Airport telling his parents, Elizabeth and Alastair he was going to the States on a fortnight’s holiday to see the sights of Manhattan.

But the truth was that for months the talented young amateur boxer had been secretly planning to live in Brooklyn and train at the well-known Starrett City Boxing Club gym there.

While in America, Stevie – who’s real name is Stephen McGhee and grew up on the south side of Edinburgh – eventually gave up boxing and transformed himself into a hip hop star, recording and releasing rap music albums, making videos and headlining shows on both sides of the Atlantic.

He tells how it was his friends in the Black community who gave the baby-faced white boy boxer-turned-rapper a new moniker of Stevie Creed and dubbed him The Brooklyn Scotsman.

His years in America have played such an important part of his life Stevie’s had a giant tattoo of the Brooklyn Bridge, the Statue of Liberty and Edinburgh Castle tattooed on his back.

Stevie, now 31, is living back home in Edinburgh and is still releasing albums, making music videos, doing concerts and has appeared in a television documentary about himself and performed on stage at the Edinburgh Festival Fringe for a run of shows two years in a row.

Stevie says: “I’ve got a lot to thank Mel Gibson for after his portrayal of William Wallace in the Hollywood blockbuster film about Scots warriors battling it out with the English. When I was living in America, many people thought Scots were all as fierce and brave as Wallace and his battling clansmen.

“I certainly didn’t do anything to disavow them of that notion, as the more they thought of me as a mad Scot always ready for a fight, the better.”

On one occasion, Stevie was about to be robbed by some teenage gangsters until Stevie pretended to them he was an undercover drugs detective from Scotland, seconded to New York telling them his name was John Kimble – the detective in the Kindergarten Cop movie. The gangsters bought his story and moved on.

Stevie would also keep an old wallet filled with Monopoly money in his pocket and once when two robbers pulled a gun on him demanding money, he handed over the bulging wallet of pretend cash.

“They see the thickness of the notes folded inside the wallet and think they’ve hit the jackpot,” Stevie explains. “The pair then run off through a darkened outdoor basketball court and disappear into the night.

“I would love to have seen their faces when they realised the wallet was full of Monopoly money and the thick wad they thought was made up of tens and $20 bills weren’t worth a dime to them.”

Stevie continues: “Being Scottish, more than being white, was what made me stand out when I was living in America and what drew people towards me and made them want to look out for me.

“The people in Brooklyn – particularly those from a Black culture and background – seemed to find a common bond with me because of my Scots heritage.

“People noticed my accent before the colour of my skin and the way I spoke was a real bonus when I came to live in Brooklyn. I’m sure out of all the different accents and dialects the Brooklynites were hearing, a Scots accent wasn’t one of them, so that set me apart from other white guys and got me noticed.

“Everyone seemed to love the accent and it was a great hit with the girls I’d come across in bars or even on the subway train.

“It’s not the first time I’d be within earshot of a girl I’d taken a fancy to and I’d pretend to be talking to someone on my mobile phone just so she would hear my accent. Now, that was a great conversation starter!”

You can get your copy of The Brooklyn Scotsman published by Macdonald Media Publishing for only £12.99 from www.thebrooklynscotsmanbook.com