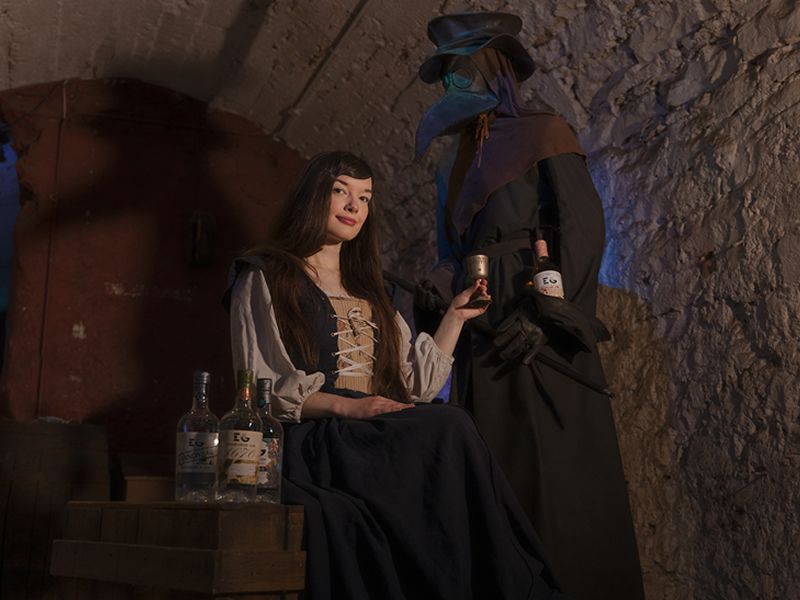 The Real Mary King’s Close has teamed up with Edinburgh Gin to launch new ‘Stories and Wonders’ gin tasting tours beneath the cobbled streets of the capital’s medieval Old Town from 8th to 30th July, as part of Scotland’s official Year of Stories 2022.

On selected Fridays and Saturdays during July, The Real Mary King’s Close, part of the Continuum Attractions Group Ltd, is joining forces with the team from Edinburgh Gin to offer gin lovers and history enthusiasts the new gin storytelling and tasting experience at the five-star attraction.

As well as learning about the authentic dark history of The Real Mary King’s Close with a dedicated guide, visitors will also have the chance to sample four unique gins from the Edinburgh Gin range, each having a historical link to Edinburgh’s medieval Old Town, Royal Botanic Gardens, Edinburgh Castle’s one o’clock gun and gin trade at the port of Leith.

The classic Edinburgh Gin and tonic features botanicals such as lavender, which was commonly used by the city’s plague doctors. The finest grain spirit is brought together with an original balance of 14 botanicals. The woody hint of pine buds, aromatic lemongrass and floral lavender are all present. Fruity jammy flavour from black mulberries balances perfectly with the citrus from the orange and lime peels in the finish. Hazelnuts, thick with natural oils, add texture and a smooth mouthfeel.

Edinburgh Gin’s 1670 is inspired by the same time period as Mary King’s Close itself and will be served with a light tonic. Visitors will learn more about how Edinburgh Gin’s 1670 has emerged from a treasure trove of over 14,000 plants that are grown in Edinburgh’s Royal Botanic Gardens. This special selection of plants, once sown in the gardens by medical innovators, now a source of biodiversity and conversation, can be tasted within every sip.

The peppery, yet smooth, Navy Strength Cannonball Gin will be served neat. Visitors will find out about its homage to Edinburgh’s wonderous seafaring past, links with Edinburgh Castle’s one o’clock gun and the history of gin imports at Edinburgh’s Port of Leith.

To complete the ‘Stories and Wonders’ gin tasting tours, visitors will also get the chance to sample a measure of Edinburgh Gin’s Pomegranate and Rose Liqueur. Inspired by grand bazaars, filled from end-to-end with delicacies and flavour, this delicious gin liqueur combines classic botanicals with soft, rose aromatics and an extraordinary pop of pomegranate. Rose is also commonly associated with the medieval plague doctors of Edinburgh.

“We’re really excited to be teaming up with Edinburgh Gin to launch our new ‘Stories and Wonders’ gin tasting tours this July, as part of Scotland’s Year of Stories. Authentic storytelling is at the heart of everything we do at The Real Mary King’s Close.

“On selected Fridays and Saturdays during the month, history enthusiasts and gin lovers will not only get the chance to enjoy one of our award-winning underground tours with a dedicated guide, but they’ll also get the opportunity to sample four truly unique gins carefully selected from the Edinburgh Gin range. Each one is linked or associated with Edinburgh’s medieval Old Town, Royal Botanic Gardens, Edinburgh Castle’s one o’clock gun or the gin trade at the port of Leith.”

“This is a really exciting opportunity for us to share and compare our love for history and storytelling with the team and guests of The Real Mary King’s Close, along-side being able to share our passion for showcasing our range of creative gins and gin liqueurs.

“This partnership has allowed us to create a tailor-made tasting offering, allowing our passionate team to deliver this history led tasting session, diving into Edinburgh’s historical gin ties, and creating the inspiration for these hand selected gins, which we hope will complement the tour offering from The Real Mary King’s Close team.”

Tickets are priced at £35 per adult (aged 18 and over only) and are available to buy online at https://www.realmarykingsclose.com/event/stories-and-wonders/

All Edinburgh Gin tasting samples will be available to purchase from The Real Mary King’s Close shop at the end of the ‘Stories and Wonders’ tours.