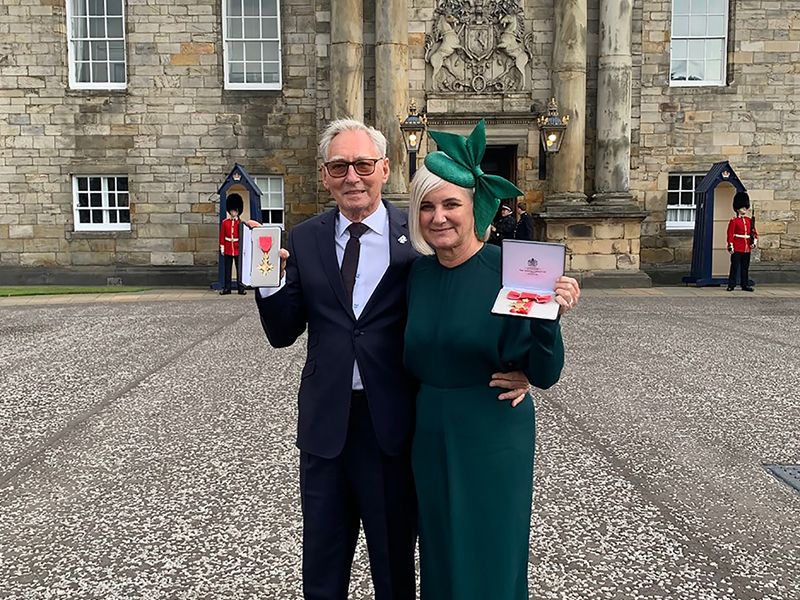 Alan and Linda Stewart, Co-Owners of Scotland’s largest salon group and multi award winners, Rainbow Room International, were invited to an investiture ceremony held at The Palace of Holyroodhouse in Edinburgh, whereby they received their OBE Award for Services to Hairdressing from Her Royal Highness The Princess Royal.

Alan and Linda Stewart received the news they were going to receive an OBE for Services to Hairdressing in 2020, where they received an email to inform them they were being awarded an OBE and further information from the Cabinet Office before their names appeared in the New Year Honours List.

Alan and Linda are the Founders of the Rainbow Room International hairdressing group and alongside building up the largest salon group in Scotland, they have also opened a prestigious state of the art academy with an advanced development programme training apprentices and established hairdressers from around the world. They have created their own Rainbow Room International product brand, raised an incredible amount of money for charities within Glasgow and the hairdressing industry and won an array of awards for their business acumen and creativity.

This week, Alan and Linda were delighted to be able to visit The Palace of Holyrood House for a formal ceremony where they received their Insignia in person from Her Royal Highness The Princess Royal in the presence of their family before being invited to a Royal Garden Party, which sees those who have been presented of honours, debutantes and Royal Family members gather to celebrate and recognise and reward public service.

Commenting on the day, Linda Stewart, Co-Owner of Rainbow Room International, said, “It was such a surreal experience attending the investiture ceremony at The Palace of Holyrood and the Royal Garden Party. We had a wonderful time and were delighted to have met and heard about so many inspirational individuals who have made significant contributions to their community. We are still so in shock that we have received this award but are extremely thankful and appreciative that our work in the hairdressing industry has been acknowledged in this way.”