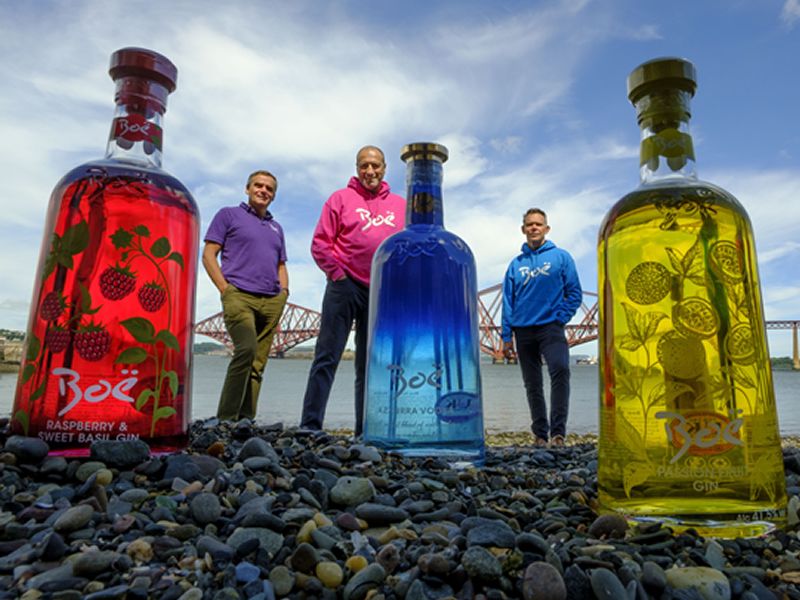 One of the UK’s fastest-growing independent gin and vodka producers, Scotland-headquartered House of Boe, is launching its first brand home and is setting an ambitious sales target as it continues to expand.

House of Boe is the leading independent gin company in Scotland by total sales, across the on-trade and off-trade, and is in the top three in the UK. The producer of a range of award-winning flavoured gins and vodkas, distilled in Stirling, has set an annual sales target of £10 million for the financial year 2022/23 as it emerges from the global pandemic when it was impacted by the closure of bars and other venues. Before Covid-19 its annual turnover was £8.5m.

Its experiential retail outlet and venue is opening in July in the popular town of South Queensferry on the outskirts of Edinburgh in the shadow of the iconic Forth Rail Bridge, following the success of a pop-up shop on the site of a former bank during the pandemic. To mark the launch, House of Boe is unveiling its first limited edition products, the Queensferry Collection of bespoke gins. Only 1,000 bottles of the Oriental spice-influenced gin will be available and they will initially be sold exclusively at the new brand home.

House of Boe sells its products mainly across the on-trade, in bars and restaurants, as well as the off-trade, such as in leading supermarket chains, including Morrisons, Tesco, Asda and the Co-op, and online. Its products can be found in almost 20,000 pubs and bars in the UK, including Green King, Marston’s, Mitchell & Butlers and Stonegate Pub Company venues, as well as independent outlets and cocktail bars, such as The Dome on George Street in the west end of Edinburgh.

The majority of its sales are in the UK, but it is also growing in popularity in Spain and plans to target other European and global markets.

The business is run by three directors with many years of experience in the drinks industry, Andrew Richardson, Carlo Valente and Graham Coull, who combine their production, marketing and sales skills.

It launched its first gin in 2007 and disrupted the market in 2016 with its inaugural flavoured product, Boe Violet Gin, when other producers were focusing on the crowded craft sector. It is the only gin from a Scottish-owned company in the UK’s top 20 best-selling flavoured gins in the on-trade.

House of Boe director Andrew Richardson said: “We have been investing in our business with the launch of new flavoured gins and vodkas and growing our employee numbers. We’re now in a strong position to open our first brand home in South Queensferry, in which we have already invested more than £200,000. This a major step for us and a sign of our confidence in future growth. We’re sure locals and visitors to the area will see our venue as a destination of choice.

“We have grown quickly over the years from a primarily Scottish to a UK-wide business. We see ourselves as risk takers, willing to stand out from the crowd, hence our move away from craft, with its production focus, to focus on the enjoyment of our drinks and their fit with our consumers’ lifestyles.

“Along with others in the drinks trade we were impacted by the closure of bars, pubs and other venues during the pandemic, but we continued to put money into our business and are now reaping the benefits. We’re on track to meet our sales target for next year and have many more exciting developments in the pipeline.”

The business has a head count of 15 - with 10 in Scotland and five in England - following a recruitment drive, including the appointment of a sales person to manage relationships with large supermarket chains across the UK. It is taking on a retail manager and other staff for its South Queensferry venue.

As well as launching new flavoured gins and diversifying into flavoured vodkas, it has recently started offering its products in pre-mixed in cans, with their calorie content clearly labelled.

House of Boe director Carlo Valente said: “We were ahead of the game when we launched our first flavoured gin. This is now the fastest growing part of the market, and we continue to innovate. With our popular range of flavoured gins and vodkas, such as raspberry and sweet basil and bramble, we have won awards for both our taste and packaging. Visitors to our experiential shop in South Queensferry can sample what we have to offer and enjoy our cocktails, while they learn more about the story behind our products.”