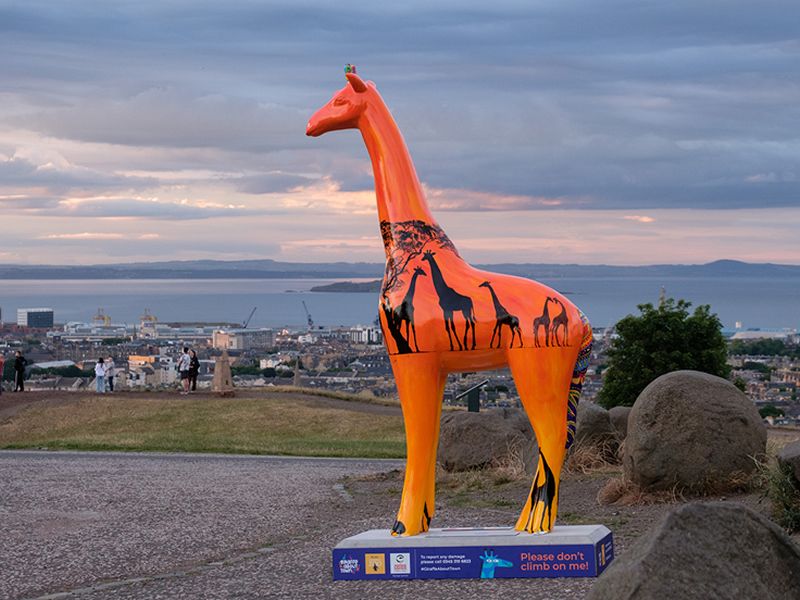 In partnership with Wild in Art, the trail aims to help the city recover after the pandemic and raise vital funds for the Royal Zoological Society of Scotland’s (RZSS) conservation work in Scotland and around the world.

Staff at the wildlife conservation charity worked overnight with official logistics partners Purdie Worldwide to place the sculptures in spots around the capital, which will now be on display until 29 August, when they will be brought together for a final farewell weekend at the zoo in September. Each model has been individually designed by artists and communities to help celebrate Edinburgh’s extraordinary heritage and cultural diversity.

Ben Supple, director of engagement and business development at RZSS said, “It is so exciting to see our giraffe sculptures out in the wild after over a year of hard work and collaboration to bring this exciting free art trail to the people and streets of Edinburgh.

“With the challenges we have all been facing, we hope Giraffe About Town will help local people and tourists fall in love with Edinburgh all over again by encouraging them to explore iconic locations and hidden gems across the city.

“Every sculpture has been sponsored by an organisation with ties to our local community or conservation and is a fantastic example of what can be achieved when we work together.”

Ultimately, the sculptures will be auctioned to raise vital funds for RZSS after the Covid-19 pandemic forced the closures of Edinburgh Zoo and Highland Wildlife Park for five months, costing the charity over £1.5 million.

Ben continued, “As well as raising funds for RZSS, we wanted to give back to the communities that helped us care for our amazing animals and keep our conservation work going when the zoo was closed. It has been incredible to see the support visitors, communities and businesses have given us.”

Alongside the main ‘tall trail’, a ‘wee herd’ of 29 four-foot-tall giraffes will be on display in city centre locations, libraries and other community spaces, sponsored by Essential Edinburgh and CityFibre.

Maps for the trail can be found on the Giraffe About Town website and app, in a special pull out in the Edinburgh Evening News and Scotsman this weekend or at Lothian Buses travel shops, Visit Scotland information kiosks and at Edinburgh Zoo.