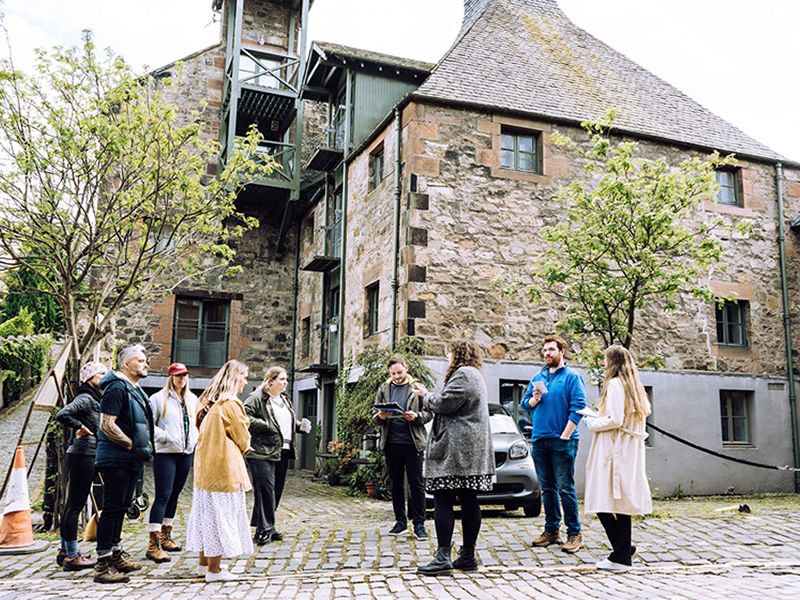 Holyrood Distillery is teaming up with some of the best street food vendors from around Scotland to create an exciting outdoor venue for foodies, cocktail lovers, and their four-legged friends to soak up the summer sun at its St Leonard’s Lane ‘Courtyard’ venue.

Holyrood Distillery’s exclusive Courtyard cocktail menu will showcase selected spirits from its range, which match perfectly with the summer street food menu, including a Holyrood Mule made with New Make Spirit 01, fresh lime juice, sugar, cucumber bitters and ginger ale; a Holyrood Distillery White Sangria made with Charmed Circle, sugar, white wine and sprite; as well as an ‘Elvis Lives’ made with Height of Arrows Gin, Campari and Schoefferhofer beer.

For the wetter and cooler days and nights, the Distillery has installed a marquee with festoon lighting and outdoor heaters to provide extra comfort.

The Distillery will also be staging a series of tasting events at its indoor bar.

For foodies who enjoy history, heritage and exploring, Holyrood Distillery is also running new ‘Charmed Circle Brewery and Distillery Walking Tours’ on selected days throughout the summer. Guests will not only learn about the history of brewing and distilling in the area, but will also enjoy a storytelling adventure into some of the little-known intrigues and scandals of the city’s brewing hey-dey, including the role of ‘witches’ and Queen Victoria’s disapproval of the industry.

Priced at £35 per person, these unique tours last around two and a half hours, and include a brief stop at one of Edinburgh’s Old Town pubs to enjoy a swift beer and whisky ‘half and half’, before finishing back at Holyrood Distillery to enjoy a taster of their ‘Charmed Circle, Strong Waters’ spirit drink. ‘Charmed Circle, Strong Waters’ pays homage to the brewing heritage of Edinburgh by revitalising the use of heritage barley, but in a new and innovative white spirit drink.

“We’re really excited to be celebrating summer and Festival season in the city by launching our new rolling programme of street food and cocktail events in our ‘Courtyard’ from June until the end of August, as well as our new ‘Charmed Circle Brewery and Distillery Walking Tours’.

“Some of the best street food vendors in Scotland will be serving up an eclectic mix of Mexican cuisine to Vietnamese sandwiches and quality slow cooked and smoked meats every day throughout the summer, each complementing our exclusive cocktail menu perfectly. As well as our alfresco events, we’ll be hosting a series of indoor tasting sessions in our bar and a self-guided Hauf and Hauf tasting.

“For those looking for a bit more adventure, our guided walking tours are perfect for people looking to explore Edinburgh on foot, whilst discovering more about the city’s brewing and distilling history.”

Charmed Circle Brewery and Distillery Walking Tours will be taking place on selected dates throughout July and August. Go to www.holyrooddistillery.co.uk for more information.