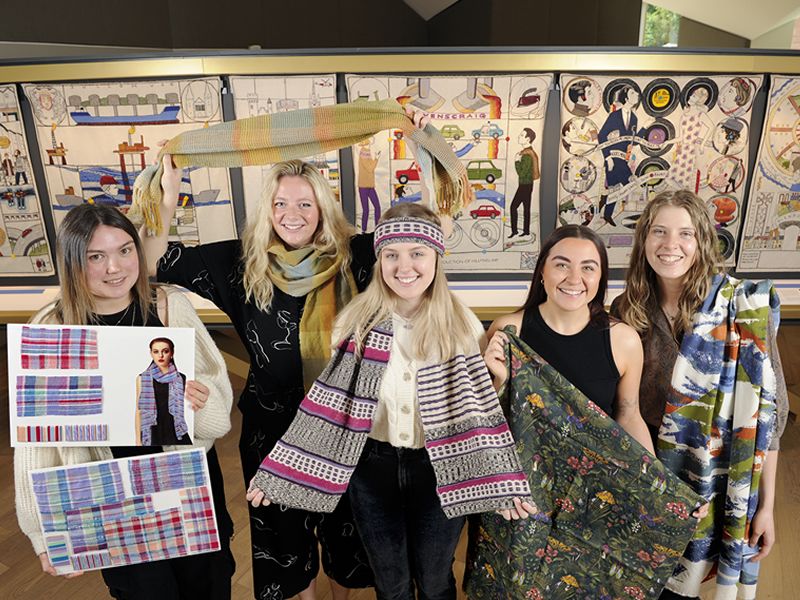 A new community-led exhibit telling the people’s story of one of the world’s leading textile regions will go on display for the first time in The Great Tapestry of Scotland’s five-star visitor centre in Galashiels Heartland of the Scottish Border from Wednesday 6 July 2022.

Running until Sunday 17 July as part of the Year of Stories 2022, entry to A Yarn Worth Spinning will be free, so that everyone has an opportunity to enjoy the experience.

Announcing the opening of A Yarn Worth Spinning, Centre Director for The Great Tapestry of Scotland at Live Borders, Sandy Maxwell-Forbes said: “The Great Tapestry of Scotland is where the people’s story of Scotland begins. Allowing people to tell their own stories in their own way, and inspiring future generations to realise their full potential is at the heart of everything we do, so we are absolutely delighted to be working with Heriot-Watt University, Redeeming Features and the local community to showcase this inspiring new exhibit. We are also thrilled that, thanks to the Year of Stories 2022 Community Stories Fund and Energise Galashiels Trust, we can open up this opportunity for everyone to enjoy free of charge

“As the home to one of the world’s longest tapestries, handstitched by over 1,000 stitchers from across Scotland, featuring some of the country’s greatest textile stories, it is incredibly fitting that everyone can now enjoy the story of the Borders’ world-renowned textile heritage in our permanent new five-star visitor centre in Galashiels.”

The exhibit centres around a series of Borders inspired textiles, clothing and interior designs by some of the University’s leading textile and design students. Each of the designs reinforce how textile heritage can be used to narrate, design and generate sustainable futures for Galashiels and the wider Scottish Borders.

The short film charts the town’s textile heritage and uncovers some unique hidden gems along the way, including the textile murals featured in the Lucy Sanderson Hall.

Speaking about their involvement, Dr Lucy Robertson, Assistant Professor at Heriot-Watt University’s School of Textiles and Design, said: “We were thrilled to support The Great Tapestry of Scotland in putting together A Yarn Worth Spinning. We’re incredibly proud of all of our students and very impressed with the designs by local school pupils also featured.

“Design centres on working with - and for - people. Inspired by the people, place, heritage and all the opportunities Galashiels presents, every element of this exhibit highlights the interdependence of economic, social and cultural factors on communities. It truly evidences how local heritage inspires the designers of tomorrow to learn from what came before and support communities to continue to grow and flourish in a sustainable way.”

Emma Kilpatrick from Perth, Scotland, whose Bernat Klein and Borders moorland inspired textiles feature in the exhibit added: “I feel honoured to be part of this brilliant opportunity. It is exciting to have such an amazing museum so close to our campus. It is really fitting for the museum to be in Galashiels due to its rich textile history. When you are emersed in this textile culture, it pushes you to explore creative boundaries and new ideas every day.”

Explaining the significance to Galashiels Heartland of the Borders. Mike Gray, Chair of Energise Gala Trust said: “From humble beginnings, Galashiels and the Scottish Borders built a global reputation for quality fabric and design. The textile industry was the major employer in the region, shaping townscapes, social and economic history, and culture. It is incredibly apt that A Yarn Worth Spinning continues this rich story and shines shine a spotlight on all that is great about our town past, present and future and further supports other regeneration initiatives which Energise Galashiels Trust are delivering in our town centre.”

Marie Christie, Head of Development at VisitScotland said: "We are delighted to be supporting A Yarn Worth Spinning through the Year of Stories 2022 Community Stories Fund.

“Events play an important role in our communities as they sustain livelihoods and help to celebrate and promote our unique places, spaces and stories. Themed Years are all about collaboration and Museums Galleries Scotland, National Lottery Heritage Fund and VisitScotland are pleased to work in partnership to create this fund to showcase community stories.

“By supporting events taking place within our communities, including A Yarn Worth Spinning, new opportunities will be provided for locals and visitors to come together and find out more about the diverse stories, past and present, that our communities have to share.”

A Yarn Worth Spinning will be displayed in The Great Tapestry of Scotland’s Discovery Centre from Wednesday 6 July to 17 July. Entry to the exhibit is free for everyone. No booking is required.

The Great Tapestry of Scotland centre in Galashiels is operated by the charity Live Borders, which manages many of the cultural and leisure facilities in the Scottish Borders, including the five-star Jim Clark Motorsport Museum and the Heart of Hawick entertainment venue.

The architectural-award-winning building was purpose built to house The Great Tapestry of Scotland, which tells the people’s true story of Scotland from millions of years BC to present day. The brainchild of Alexander McCall Smith, tapestry is one of the world’s largest community arts projects. It was hand-stitched by a team of 1,000 stitchers from across Scotland, using 160 linen panels and over 300 miles of wool (enough to lay the entire length of Scotland from the border with England to the tip of Shetland). The panels were designed by artist Andrew Crummy, based on a narrative written by Scottish Borders-based award-winning writer and historian Alistair Moffat.

The centre is home to two galleries, a cafe and workshops that allow participants to meet and learn from makers. Grayson Perry’s Essex House Tapestries, which tell the life story of a fictional character Julie Cope, are currently on display in the Centre’s Gallery 1420 until 16 August. The centre is open to the public 7 days a week from 9.30am to 5pm and The Stitchers Cafe is open 9.30am to 4pm. Entry to a Yarn Worth Spinning is free.
Prices to view the Great Tapestry of Scotland and the Essex House Tapestries vary.

To book, or for more information visit greattapestryofscotland.com