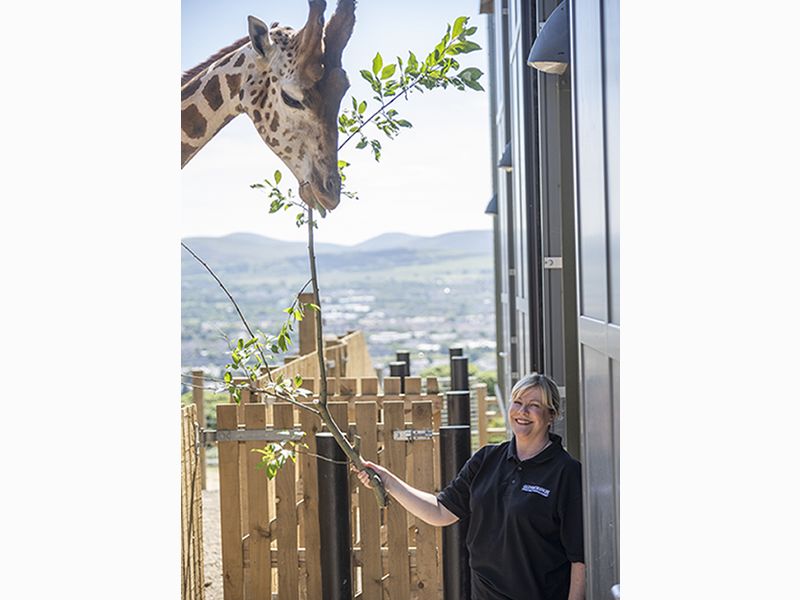 21/06/22 - She spends most of her time creating delicious spirit for Glenmorangie’s Highland single malt Scotch whisky. But yesterday whisky maker Anna Patterson swapped the Distillery’s giraffe-high stills to work with the animals themselves at Edinburgh Zoo, to mark World Giraffe Day.

Held on June 21 – the longest day (or longest night) of the year, the event is an annual celebration of this majestic, but endangered animal. As part of its ongoing conservation partnership to protect the giraffe in the wild, Glenmorangie is also supporting a trail of towering giraffe sculptures taking over Edinburgh this summer, and a series of evening events at the zoo.

The giraffe has long been a beloved symbol of Glenmorangie. The same height as a giraffe, its stills allow more space for taste and aroma, which is why the Distillery’s spirit is so wonderfully delicate and fruity. But the giraffe faces serious threats in the wild, from poaching to habitat loss. Numbers have fallen almost 30% in just 30 years, with some populations now critically endangered. To help the giraffe, in 2020 Glenmorangie forged a pioneering partnership with the Giraffe Conservation Foundation (GCF) and the Royal Zoological Society of Scotland (RZSS) to safeguard wild giraffes in Africa and provide a habitat for the animal at Edinburgh Zoo, which welcomed its new bachelor herd in 2021.

For World Giraffe Day, Anna, who usually works in Glenmorangie’s still house, spent time at the zoo assisting the giraffes’ keepers. She learned how to care for the animals, helping to feed them and keep their enclosure in tip-top condition. Anna also met RZSS WildGenes experts in their laboratory, the UK’s only zoo-based genetics lab, to hear about their work supporting GCF. Under the partnership with Glenmorangie, the scientists are conducting cutting-edge DNA research to support the reintroduction of Nubian (formerly known as Rothschild’s) giraffes, to areas of Uganda where giraffes are locally extinct.

Jonny Appleyard, hoofstock team leader at Edinburgh Zoo said: “It is great to see Glenmorangie get stuck in and involved with our team to learn more about our incredible giraffe herd. We know from first-hand experience that connecting with nature can inspire and empower people to make change for wildlife and our herd act as great ambassadors for raising awareness for the threats the species face in the wild. Anna has been a great help and we look forward to working together again in future to champion giraffe conservation.”

Glenmorangie is celebrating the giraffe in even more ways this summer. It is the official presenting partner of Edinburgh Zoo’s Giraffe About Town trail, in which a herd of more than 40 eight-foot-tall giraffe sculptures will be placed around the capital from 1 July to 29 August. Designed to help the city recover following the pandemic, the trail will also raise vital funds for the charity’s wildlife conservation work. Glenmorangie will sponsor two of the giraffe models, which will showcase its conservation partnership.

To further mark the trail, Glenmorangie is supporting a series of After Hours events at the zoo, held exclusively for adults. On six evenings in June, July and August, over-18s can explore the zoo after its usual closing time, enjoying acoustic sets and specially crafted Glenmorangie cocktails. Whisky and cocktail masterclasses will be held on selected evenings.

Caspar Macrae, Glenmorangie Global Marketing Director, said: “Since it is the same height as the stills in which we create our delicious spirit, the giraffe has always been adored at Glenmorangie. And we are dedicated to doing all we can to ensure its future. I’m delighted that Anna had the opportunity to meet the herd at Edinburgh Zoo for herself, and learn more about the ground-breaking work of our partners, as we mark World Giraffe Day. From late-night adult events at the zoo to the eye-catching sculptures planned for the Giraffe About Town trail in Edinburgh, we will continue on our mission to raise awareness of this majestic animal’s plight in every way we can.”