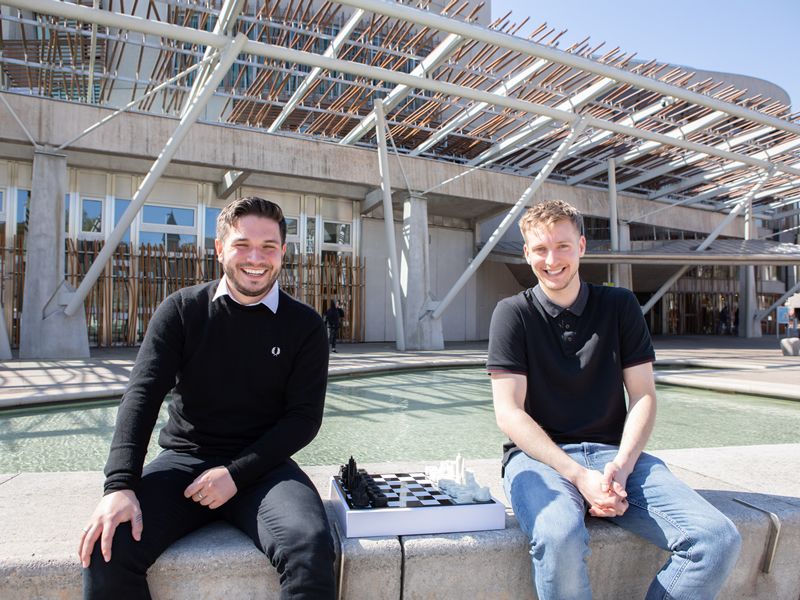 Designed by Michael O’Donnell and Alex Duff, the Edinburgh chess set is the latest 3D model depicting some of the capital city’s most iconic statues and landmarks including the Scott Monument, Dugald Stewart Monument, Edinburgh Castle, Greyfriars Bobby and Murrayfield Stadium.

The pair, who studied mechanical engineering with product design, met on their first day at university and have been inseparable since. They graduated together during the pandemic in June 2020 and a year later launched their business with the Clydeside chess set honouring Glasgow.

“The intricate detail of our chess pieces is our unique selling point,” says Alex Duff. “We visit the location, take as many pictures as possible, then build up the model from the ground up using 3D CAD software. It takes around 36 hours in total to make one set, that includes printing time, hand finishing and assembly.

“With the Edinburgh chess set we've really pushed ourselves and the technology to the limit. The machines we use to produce the models are accurate to five microns. That’s 0.05mm. Tiny! That’s how we can produce such detailed models.”

“This is a dream come true for us,” says a delighted Michael O’Donnell. “We are passionate about Scotland and chess, so this is the perfect way to celebrate that. We wanted to make a set that would be challenging and fun to play, but also act as a beautiful centrepiece in people’s homes.”

The best-selling 3D Clydeside chess set has become hugely popular for luxury gifts for birthdays, anniversaries, graduations, and retirements. The pair hope the new Edinburgh chess set will be a hit with tourists visiting the capital city and for Scots abroad.

The sets are available to buy online at £225.

The Duke’s Gambit Glasgow vs Edinburgh chess competition takes place on Monday 30th May, from 6.30-9pm, free entry and complimentary drinks from Enotria & Co and Beavertown.