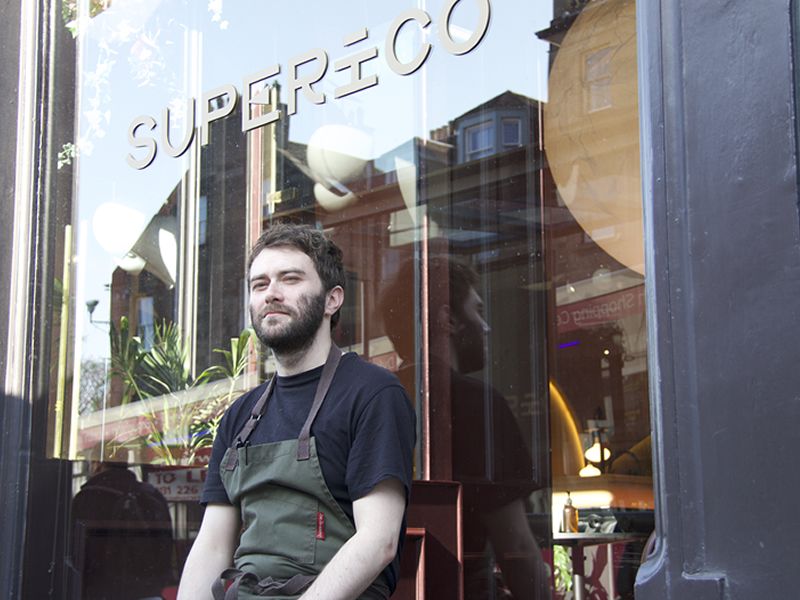 Calum is part of the Ralston family food clan in Scotland. His parents and elder brothers Scott and Stuart are all trained chefs. Stuart Ralston appeared on the recent series of Great British Menu.

Calum has over 15 years’ experience in Edinburgh’s hospitality industry, including training under both his brothers at well-known Edinburgh restaurants, Aizle, The Chop House in Bruntsfield and White Horse Oyster and Seafood Bar on the Royal Mile.

Superico, which won the title of top ‘Bar, Club & Lounge’ at the prestigious Hospitality Design Awards in New York just six months ago, is widening its horizons by introducing a new concept restaurant and cocktail bar menu from spring 2022.

Created by Calum, Superico's new menu takes inspiration from some of the most exciting food destinations, styles and trends around the world this year, including Japan, Latin America and France. The menu style also reflects the strength of interior design and creativity across both Superico venues.

Superico Restaurant welcomes pre-booked private groups of up to 24 people, as well as smaller parties and couples. A selection of small plates, Champagne, wine and cocktails can also be enjoyed at the restaurant’s bar, which has views directly into the open working kitchen.

“I’ve been a big fan of Superico since it reopened its doors in 2021. The restaurant’s unconventional menu, the cocktail bar’s bold interior design and the exceptional service set them apart from many of the other leading hospitality venues in Edinburgh’s New Town.

“More than ever before, I think people are looking for unique and quality dining experiences that excite their senses, transport them to somewhere exotic and reflect the latest food trends and flavours from around the world.

“We’re confident that our new menus will appeal to foodies, cocktail lovers and style gurus alike, who can now look forward to casual, but sophisticated venues to relax and socialise right in the heart of the city.”

Both Superico Restaurant at 83 Hanover Street and Superico Bar and Lounge at 99 Hanover Street are managed by one of Edinburgh’s most recognised hospitality faces, Mike Lynch. An award-winning mixologist, Mike specialises in drinks and menu development. He has over 12 years’ experience operating bars and restaurants in Edinburgh, including winning the title of ‘UK’s Best Cocktail Bar for Edinburgh’s Bramble Bar in 2019. He also represented the bar in numerous industry events and takeovers in cities such as London, Copenhagen, New York and Denver in America.

At Superico, Mike showcases international Aperitivo-style drinks with a section for spritzes and Martini’s served straight from the freezer, as well as speciality wines from around the world served by the glass. Signature cocktails at Superico Bar include Padron Martini, using padron peppers which are synonymous with Spain; Yuzu Spritz which uses an aromatic citrus from Japan; and Superico’s Peach Negroni, which combines Italian and Scottish influences, including artisanal flavours and ingredients from The House of Botanicals in Aberdeen.

“In just over a year, we’ve quickly established Superico as Edinburgh’s leading design-led cocktail bar and restaurant, serving an eclectic mix of bold food and cocktails with big flavours, as well as attracting global recognition in New York only a few months ago.

“Superico was the only venue outside America to be shortlisted in the annual Hospitality Design Awards, which recognise and celebrate the year’s best and most innovative achievements in both project and product design from around the globe.

“We’re now keen to embrace our global appeal by giving our menu a more international flavour and concept that we know our customers will love. As our new head chef, Calum will be taking the lead in developing our menu, keeping it fresh, bold, and continuing to reflect the most exciting food destinations, styles and trends around the world, whilst showcasing the best of Scotland’s larder.”

Scottish produce and ingredients featured on the Superico menu include oysters from Loch Fyne, seafood and fish from Welch Fishmongers at Newhaven in Edinburgh, I J Mellis Cheesemonger, and John Henderson meat specialist in Glenrothes.

Superico Restaurant at 83 Hanover Street is now open Wednesday to Friday from 3pm to 12am, Saturdays from 12pm to 12am, and for Sunday brunch between 10am and 5pm.

The early dinner menu is available Wednesday to Saturday from 3pm to 6pm, including one small plate, one large plate and one side for only £22 per person. Champagne and oysters are also available all day Wednesday to Saturday, including three Loch Fyne oysters, focaccia with house butter and a glass of Perrier-Jouet Champagne for only £14 per person.

For more information about Superico Restaurant at 83 Hanover Street and to make a booking, visit www.superico.com or email 83@superico.com.

Superico Bar and Lounge is located just a few doors down from the restaurant at 99 Hanover Street. The 120-capacity venue is open Wednesday to Sunday from 4pm to 1am.

The 19th-century Georgian building and former banking hall is a ‘fiesta for the eyes’, having been transformed into a Chilean-inspired, sun-drenched party palace by top Edinburgh-based design studio, JA!COCO! The stylish venue now resembles a Tamara de Lempicka painting, with Art-Deco-style shapes and jewel-like colours, including turquoise and bright yellow. There’s even a huge globe feature light that gives the illusion. of a full moon.

For more information about Superico Bar and Lounge at 99 Hanover Street and to make a booking, visit www.superico.com or email 99@superico.com.