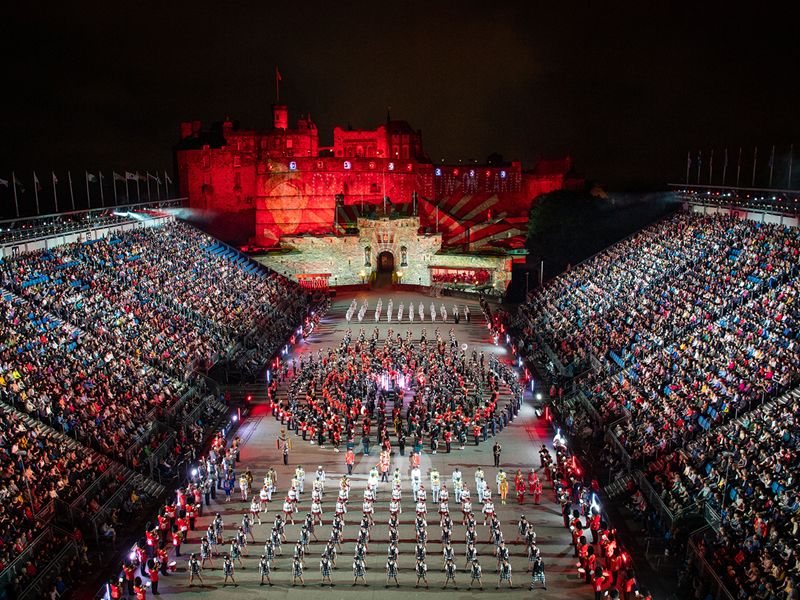 CONNECTION THROUGH VOICES - THE ROYAL EDINBURGH MILITARY TATTOO SHOWCASE FOR 2022

Wednesday 27 April: This August, The Royal Edinburgh Military Tattoo will make its highly anticipated return with this year’s Show, Voices. Staged on the iconic Edinburgh Castle Esplanade between 5-27 August, the Show will be a celebration of expression, giving a stage to performers and acts from around the globe to share their voice.

This year’s Show is the first from the Tattoo’s new Creative Director, Michael Braithwaite, who along with new partners in production design, lighting, audio, costume, and projection will showcase his vision for Tattoo this year. Voices draws inspiration from people across the globe who, despite physical separation, continue to connect and share their voices creatively through spoken word, song, music, and dance – languages common to all.

Over 800 performers from across the globe will take part in this year’s Tattoo, bringing with them incredible music, dance, and performance talents. There will be cultural showcases and musical presentations by performers from Mexico, The United States, Switzerland, Germany, Canada, Australia, and New Zealand along with homegrown talent from the UK. Military acts will continue to play a central role in the performance, with the Army confirmed as the lead service this year. Audiences can expect to hear the legendary sound of the Massed Pipes and Drums that will echo around the Esplanade as part of Voices, supported by Tattoo Pipes and Drums, Tattoo Dancers, Tattoo Fiddlers, and musicians from UK Military Regiments.

Joining the already announced iconic The Top Secret Drum Corps, over 100 performers from the Banda Monumental de Mexico will return to the Esplanade this year bringing energetic, colourful carnival energy to the Show.

The renowned and incredibly talented Highland Divas will make their Tattoo debut this year, bringing their showstopping vocals to Voices. The crowd will be taken on an exhilarating musical journey showcasing the Divas’ eclectic repertoire including the Folk Music of Ireland, Scotland, and New Zealand.

Fan favourites New Zealand Army Band will also be part of the Tattoo’s triumphant return this summer. This will mark their seventh appearance, having last appeared at the Castle Esplanade in 2019, and audiences can once again expect an energetic performance that will dazzle and amaze.

Celebrated as the Musical Ambassadors of the Army, The United States Army Field Band will make their Tattoo debut this year, exciting and entertaining the crowd with a marching, military mash up of traditional and contemporary music. While The United States Air Force Honor Guard, the official ceremonial unit of the Air Force, will make its return to the Tattoo this year with its dynamic display of precision drill.

Michael Braithwaite, Creative Director of The Royal Edinburgh Military Tattoo, said: “This year, the Tattoo is inspired by people all over the world who have found a way to connect with each other through their creative voice and the Show will celebrate this expression by bringing together over 800 performers on Edinburgh Castle’s iconic Esplanade.

“The team and I are working collaboratively with our new production partners and all the acts to ensure the key elements of the Voices theme run through everything from the lighting, costume design, projections and of course, the music and vocals.

“For the very first time we will feature grand staging on the Esplanade, and we are taking a new approach to the pre-show segment with plans in place to enhance audience engagement and involvement further. For 2022, various voices within the Show will carry the story and intricate soundscapes have been produced to tie each of the performances together in an immersive experience for audiences.”

2022 will mark the first Show under The Tattoo’s bold new brand proposition, Performance in a New Light, which embraces military tradition and combines it with exciting new innovations and contemporary touches. Voices will ensure that the 2022 Tattoo is a welcome return and a celebration of the connections, cultures and languages that bring people together in the iconic Edinburgh Castle setting.

In 2023, the Tattoo will present Stories on the Esplanade of Edinburgh Castle. A show curated to share the stories of the performers and acts from around the globe. While 2022 will give a voice to these acts through the theme Voices, 2023 will see this continued through storytelling elements. For the first time ever tickets for The Royal Edinburgh Military Tattoo will go on sale during the August run for the following year.

Buster Howes, Chief Executive of The Royal Edinburgh Military Tattoo, said: “2022 marks a new era for the Show, and I look forward to showcasing the spectacular themes, creative and the incredible talent of the acts that will feature in both Voices and Stories.

“With world-class talent being added to our Board, our internal team and our partner suppliers this year, the Show is taking a new, reinvigorated and creative direction which we know will produce a truly spectacular Show. The acts, as ever, will showcase a must-see spectacle that excites audiences with a blend of fresh and modern performances, with the traditional, military elements that it's known and loved for.

“More than anything, we hope people from all walks of life can come together to experience Voices and the magic of the Tattoo.”