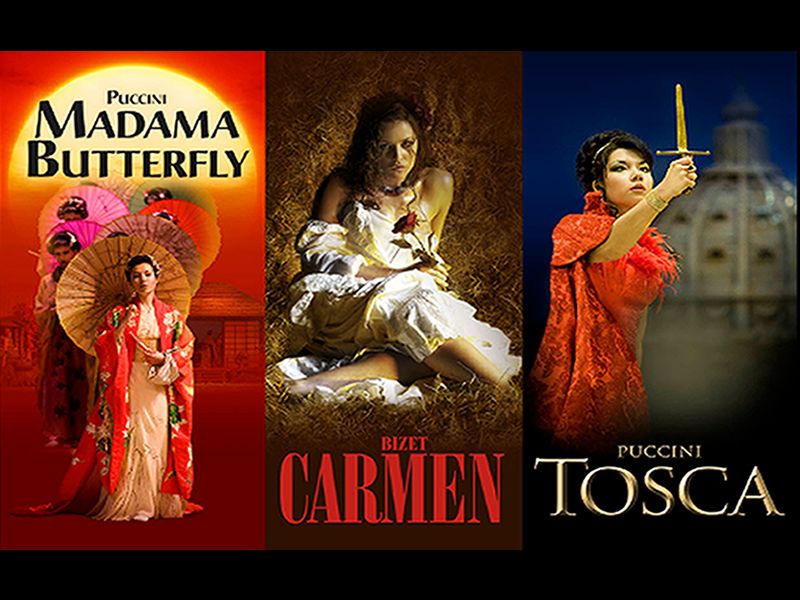 TOSCA: An explosion of love and treachery…

Premiered on January 14th 1900, Tosca has stood the test of time and is one of the undisputed classics of the opera repertoire. A tragic story of betrayal and lust, love and lies, Puccini’s Tosca is a masterpiece.

Following the huge success of its visit to the Royal Albert Hall, Tosca returns to Edinburgh to delight audiences once again. This most popular of operas, with its tender and moving arias Recondita Armonia, Vissi d’Arte and E Lucevan le Stelle, is a heady mixture of true love, torture and treachery, with two of the best roles for tenor and soprano, plus a pure evil villain as the baritone.

In order to create music with authenticity, Puccini went to Rome specially to listen to the early morning church bells from the ramparts of the Castel Sant'Angelo before penning his score. Ellen Kent returned to Rome, camera at the ready, to photograph some of Italy’s most inspiring churches - full of the beauty and awe that inspired Puccini - in order to create a set which would complement such a celebrated score.

The sets for Tosca are rich, grand and lavish with beautiful period Italian tapestries, chandeliers and costumes replicating Rome in the early nineteenth century. The magnificent set was built by Set Up Scenery who also builds sets for the Royal Opera Covent Garden.

Welcoming back the celebrated Moldovan baritone Vladimir Dragos who will sing Scarpia, and the international stars, Elena Dee and Alyona Kistenyova with Petru Racovita, the International Moldovian baritone, sharing the role of Scarpia.

Also returning is the guest conductor and artistic director of the National Opera of Moldova, Nicolae Dohotaru with 30 members of the National Ukrainian Orchestra, Kyiv.

Bizet’s masterpiece, Carmen, is an evening of passion, sexual jealousy, death and unforgettable arias. Carmen is the story of the bewitching girl whose tantalising beauty lures a soldier to desertion and leads to her own murder. The opera includes some of the most evocative and best-loved melodies in opera –The Habanera, The Seguidilla, The Flower Song, The Chanson Bohème and perhaps the best-known baritone aria of all The Toreador’s Song.

The stunning new set reflects the magnificent architecture of Seville with its Roman and Moorish influences, which includes the main square, the bull ring and the famous tobacco factory. The set was built for Ellen Kent in England by Setup Scenery, who also build sets for the Royal Opera Covent Garden.

As with any of Ellen Kent’s shows all of the soloists have been hand-picked and directed by Ellen to create a visually beautiful and moving production of Carmen.

Madama Butterfly is Puccini’s popular tale upon which the hit West End musical Miss Saigon is based. One of the world’s most popular operas, Puccini’s Madama Butterfly tells the heart-breaking story of a beautiful young Japanese girl who falls in love with an American naval lieutenant – with dramatic results. Highlights include the melodic Humming Chorus, the moving aria One Fine Day and the unforgettable Love Duet.

With exquisite sets, including a spectacular Japanese garden and fabulous costumes including antique wedding kimonos from Japan.