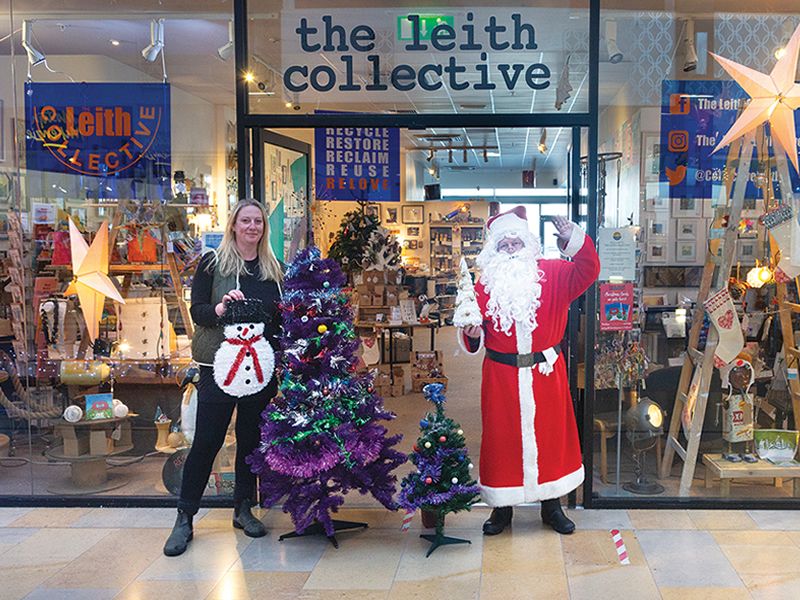 The award-winning Leith Collective reveals their plans to give back this Christmas with the launch of their ‘Relove, Rewild Christmas’ and ‘Secret Seasonal Sculptures’ initiatives

The Leith Collective has had an incredible year, adding a string of awards and accolades to their name, so this Christmas they’re going all out to give back – to the people of Edinburgh and to the environment. And they’re calling on locals to join them by putting sustainability at the top of their wishlists with the launch of their ‘Relove, Rewild Christmas’ and ‘Secret Seasonal Sculptures’ initiatives.

Got an unloved Christmas tree languishing in your attic? Take it to The Leith Collective where they will be rehoming trees throughout the festive period, spreading Christmas cheer to those who can’t afford to buy one. What’s more, for every Christmas tree donated to the Edinburgh store, a real tree will be planted right here in Scotland.

The Leith Collective will be donating to Trees for Life which aims to rewild the Scottish Highlands and restore the Caledonian Forest. Native trees such as Scots Pines and woodland plants will be planted in the quest to reduce our carbon footprint, and to provide space for wildlife to flourish and communities to thrive.

Commenting ahead of the launch of the ‘Relove, Rewild Christmas’ initiative, The Leith Collective founder, Sara Thomson said; ‘For anyone who has a tree or decorations gathering dust in their loft, this is a great way to ensure they continue to spread Christmas cheer. We understand many people have had it tough throughout the pandemic, therefore we will be giving away the donated trees and decorations completely free of charge to anyone who requests one, no questions asked’.

And to spread that Christmas cheer even further, The Leith Collective has called upon some of their resident artists to create a series of 24 seasonal sculptures – each lovingly reimagined and handcrafted from old wooden fixings – and they will be hiding one each day in the run up to Christmas throughout the city centre.

Discussing the advent surprises, Sara commented; ‘The secret seasonal sculptures are a fun way to show people what can be created using materials that would otherwise be discarded. We hope they encourage more people to get creative this Christmas and keep sustainability at the forefront of their mind’.

The first secret seasonal sculpture will appear somewhere in Edinburgh on Wednesday 1st December and anyone who finds one can take it along to The Leith Collective where they will receive an additional festive surprise.

The ‘Relove, Rewild Christmas’ and ‘Secret Seasonal Sculptures’ initiatives are just two ways The Leith Collective plan to give back this Christmas after what has been a phenomenal year for them. In January 2021, The Leith Collective became the UK’s first single-use plastic free shop of its kind and was later crowned runner up in the Surfers Against Sewage Plastic Free Awards. In July, owner Sara
Thomson took her message of sustainability west-side, opening The Clydeside Collective in Glasgow’s St Enoch Centre, followed by The Camdentown Collective in London’s Buck Street Market in September. Later that month, Sara was specially selected to become a UK ‘One Step Greener’ ambassador and showcased her story of how she is tackling climate change at COP26.

From Sara’s role as a One Step Greener ambassador and the inspirational work The Leith Collective is doing to showcase sustainability, the Prime Minister chose Sara to become the UK's 1772nd Point of Light. As a result, Sara met Boris Johnson at 10 Downing Street and enjoyed a video chat with the Queen. On returning to Edinburgh, Sara received the news that she had won two awards at the Creative Edinburgh Awards – The Leadership Award and The Social Award.