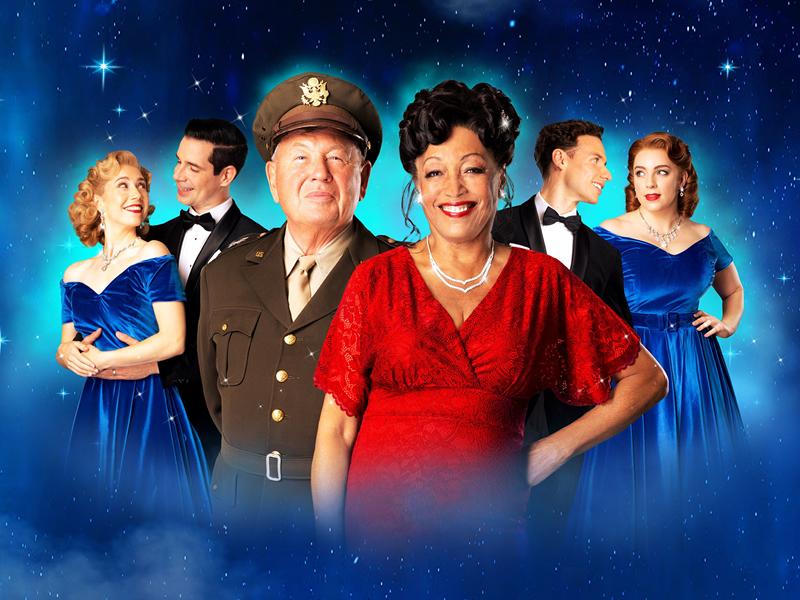 Sheila Ferguson is best known as the lead singer of chart-topping group The Three Degrees, whose hits include ‘When Will I See You Again?’, ‘Take Good Care of Yourself’ and ‘A Woman In Love’. Her many theatre credits include the musicals Thoroughly Modern Millie, Soul Train, Oh! What A Night and Respect La Diva and many pantomime seasons throughout the UK. She has also appeared on television as a contestant on I’m A Celebrity, Get Me Out of Here!, and as a panelist on ITV’s Loose Women.

Dan Burton reprises his role as ‘Phil Davis’, a part he played in this production of White Christmas at both the Dominion Theatre in London’s West End and at Curve, Leicester. He was nominated for an Olivier Award for his performance as Tulsa in Gypsy at the Savoy Theatre and his other West End credits include Jersey Boys, The Pajama Game, Chicago, Legally Blonde, Betty Blue Eyes and Guys and Dolls at the Royal Albert Hall.

Matthew Jeans’ West End credits include Les Misérables and Miss Saigon, he has also appeared in the international tours of Hairspray and We Will Rock You and in Funny Girl, Joseph and the Amazing Technicolour Dreamcoat, Singin’ in the Rain and Mrs Henderson Presents.

Jessica Daley’s theatre credits include the UK and Ireland tours of An Officer and a Gentleman and The Sound of Music, the international tours of Evita, Les Misérables and Grease The Musical and Mamma Mia! in the West End.

Emily Langham has most recently been seen in Carousel at Regent’s Park Open Air Theatre. Her other theatre credits include The Boy Friend, Oklahoma!, West Side Story, Follies, Mrs Henderson Presents and Les Misérables.

Duncan Smith’s theatre credits include The Phantom of the Opera, Marguerite, Anything Goes, Evita and Calamity Jane in the West End, and the UK Tours of Fame, The Sound of Music, Chitty Chitty Bang Bang and Kiss Me, Kate.

A timeless romantic comedy to warm hearts of all ages, WHITE CHRISTMAS features the classic songs “Blue Skies”, “Sisters”, “I Love A Piano”, “Count Your Blessings (Instead of Sheep)” and the most famous festive song of all… “White Christmas”.

WHITE CHRISTMAS has Music and Lyrics by Irving Berlin and a Book by David Ives and Paul Blake. It is based on the original production by Curve Artistic Director Nikolai Foster (Annie, Breakfast at Tiffany’s). It is directed by Ian Talbot OBE (High Society, Anything Goes) and choreographed by two-time Olivier Award-winning choreographer Stephen Mear CBE (Mary Poppins, Gypsy). Set Design is by Michael Taylor and Costume Design is by Diego Pitarch. Musical Supervision is by Stephen Brooker, Lighting Design by Mark Henderson and Sound Design by Tom Marshall. Orchestrations are by Larry Blank with New Musical arrangements by Jason Carr.