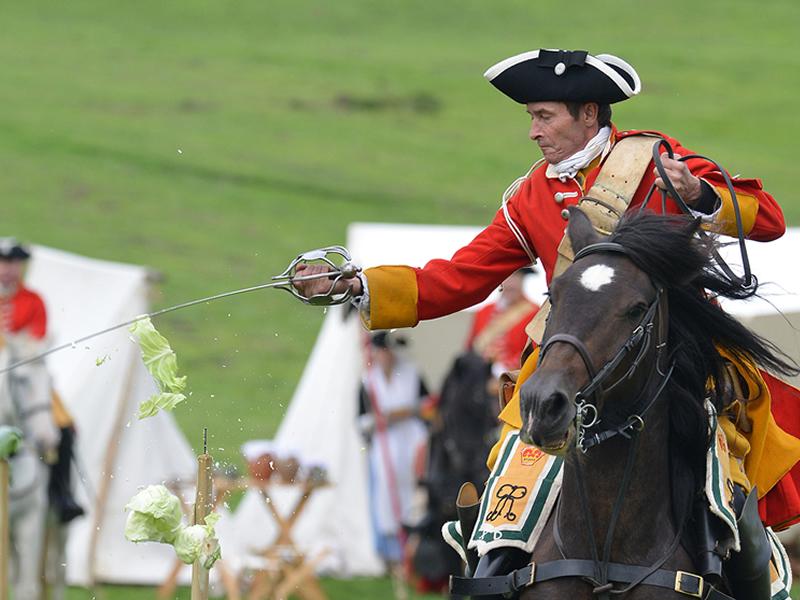 From a largescale re-enactment to unique exhibitions and workshops, this year sees a programme of activity marking the historic and cultural legacy of one of the UK’s most significant Jacobite battles, the Battle of Prestonpans.

The events, which are supported by EventScotland, part of VisitScotland’s Events Directorate, start with an exhibition revealing the many ways the battle has influenced art, music, literature and film over the years. September then sees a two-day living history event with re-enactors travelling from across the world to take part.

Events included in the programme include:

“Hey Johnnie Cope!” Exhibition, John Gray Exhibition Centre, Haddington 7 August - 30 October (Open Tues-Sat, 10am-1pm and 2-4pm), entry free
An exhibition at the John Gray Centre in Haddington will take place from 7 August - 30 October, marking the cultural legacy of the Battle of Prestonpans. This will include 21st century paintings, Victorian engravings, 18th century artifacts, and even a copy of the script of the 1948 film, Bonnie Prince Charlie, starring David Niven. Two separate remnants of the famous thorn tree under which British army officer and local resident Colonel James Gardiner was mortally wounded during the battle, will be reunited and displayed together for the first time. Two supporting Gaelic cultural workshops with poetry and song will be convened by singer, actress, writer, broadcaster and campaigner, Dolina Maclennan.

The Prestonpans Re-enactment Weekend, Greenhills, Prestonpans, 18 -19 September (11-5pm: adults £5, children £3)
This large-scale living history event will bring the past to life as visitors get the chance to meet re-enactors in full period dress and witness history being made. This year sees participation from re-enactors from across the world and a new cannon demonstration showing the impact of such artillery on charging clansmen.

The battle re-enactment will be complemented by a series of arena displays and living history cameos in the encampment, including the Prince’s review of the Jacobite army; a cavalry display as the horsemen test their skills; Redcoat manoeuvres as General Cope puts his soldiers through their paces; and the two commanders holding their War Councils.

Amidst the military action, visitors will be able to explore the two immersive military camps and speak to the re-enactors to find out more about life in 1745. They can even approach the royal pavilion in the hopes of meeting Bonnie Prince Charlie himself! Young visitors can also try their hand at children’s crafts, and even train as Junior Jacobites and try out a Highland Charge.

Anniversary commemoration, Prestonpans Battlefield, 21 September, 12pm
Wreaths will be laid at the Memorial Tables on the battlefield to remember those who fell in battle on both sides during the conflict. Featuring a display of replica banners, the commemoration will be live-streamed on the Trust’s facebook page (@Prestonpans1745).

With support from EventScotland’s Scotland’s Events Recovery Fund, the programme of events has been organised by the Prestonpans (1745) Heritage Trust, a registered charity promoting the Battle of Prestonpans, its rich associated heritage and its context in the larger Jacobite story for the benefit of both local and visiting audiences, school groups and the communities surrounding the battlefield.

Dr. Arran Johnston of the Prestonpans (1745) Heritage Trust said:
“We’re looking forward to bringing this living history event and series of activities and exhibitions back to Prestonpans this year. It’s a wonderful opportunity to reveal to local people and visitors alike the significance of this major battle and the way it continues to influence culture to this day. These events are stand-outs for everyone from history lovers to children of all ages.”

In October, the Trust is joining forces with military history publisher Helion & Company to host a Jacobite history conference. The event will be held at Prestonpans Town Hall, which the Trust is currently transforming into a museum and heritage space interpreting the battle. Guided battlefield tours will also return in the autumn, along with a series of online talks which follow the success of the Trust’s lockdown initiatives.

Paul Bush OBE, VisitScotland’s Director of Events, said:
“EventScotland is delighted to be supporting the Battle of Prestonpans through Scotland’s Events Recovery Fund. The programme of activity offers audiences an authentic and engaging experience while marking the historic and cultural legacy of one of the UK’s most significant Jacobite battles.

“Scotland is the perfect stage for events and supporting events, including the Battle of Prestonpans, is crucial in our recovery from the coronavirus pandemic.”

All events marking the Battle of Prestonpans and its legacy will be delivered in line with Scottish Government Covid-19 mitigation measures in place at the time.

To find out more visit www.battleofprestonpans1745.org