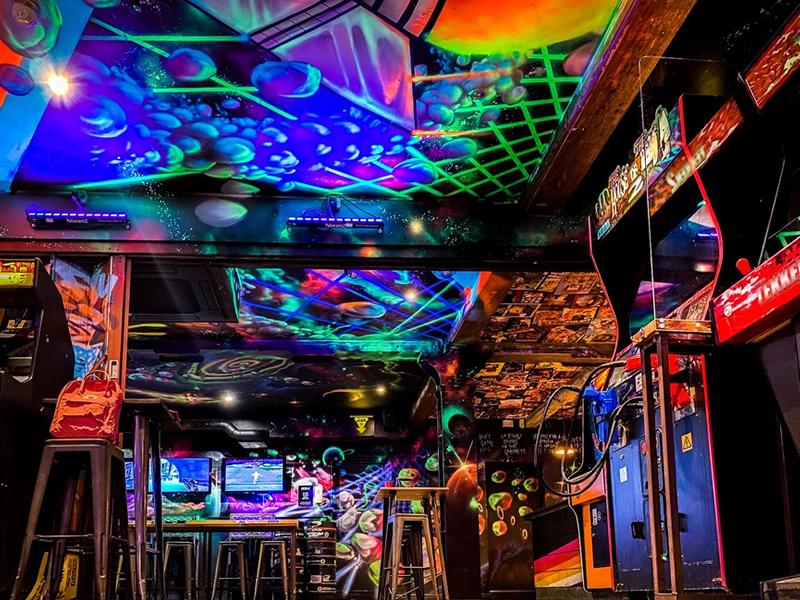 Edinburgh’s first retro arcade bar, NQ64 has announced it is looking for volunteers to test its selection of arcades and classic consoles, ahead of its official opening on Thursday 12th August. NQ64 will grant exclusive access to a chosen few on Monday 9th and Tuesday 10th August for a “test drive” of games such as MarioKart, Time Crisis 2 and Dance Stage. Testers will be picked at random from those who apply on Instagram when the invitation post goes out on Wednesday (28th July).

The doors will officially open to the public on 12th August with the first 50 people into the bar, on both Thursday and Friday at 4pm, receiving a gift bag bursting with NQ64 merch and goodies including retro booze and snacks.

The Lothian Road bar has been transformed into a neon splattered drinking den, with NQ64’s signature UV graffiti designs adorning the walls, floor and ceiling. It will be home to a large selection of retro arcade machines (look out for the secret Guitar Hero sound-proofed studio!) and a bunch of classic consoles. They’ll be serving up a range of game-themed cocktails such as the prosecco based Princess Peach, the Blanka with Tequila and melon and Mad Max with rum, absinthe and fire. A wide selection of packaged beers will be available including a some from Edinburgh based breweries Pilot Brewing and Campervan Brewery, to wash down a selection of retro crisps.

Over 30 retro arcade game machines will be available with fan favourites and cult classics from the past five decades, operated using distinctive NQ64 tokens which are purchased at the bar. When the tokens run out there are free-to-play classic consoles including the Playstation 1 and N64 featuring the classic Golden Eye.

*To be in with a chance of becoming a games tester, people are encouraged to follow their Instagram account @nq64edinburgh and look out for the upcoming post with details for a chance to be invited down.