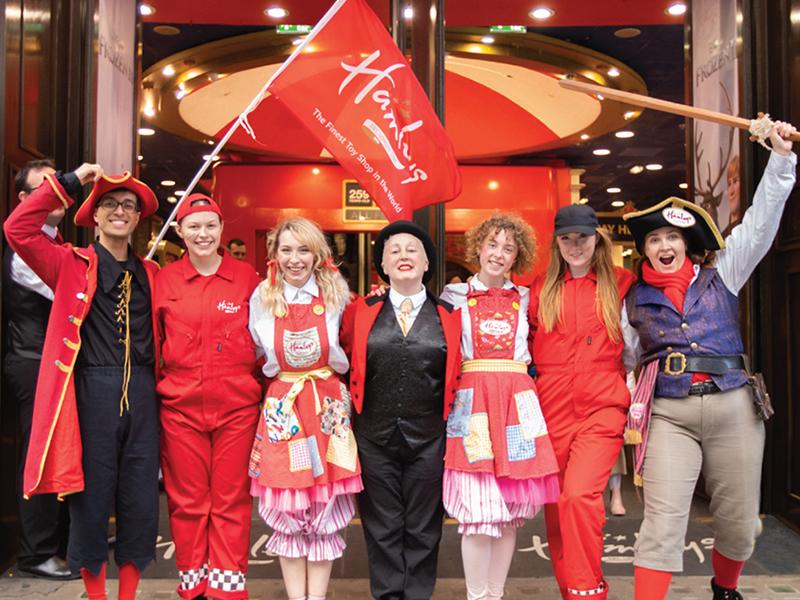 Transforming into a magical land for kids, the new store will feature everything from its instantly recognisable collection of Hamley bears, to speed racing car toys, as well as flying drones and giant floating bubbles.

Known as ‘The Finest Toy Shop in the World’, Hamleys will join the 1.7 million sq ft shopping district occupying over 2,475 sq ft within the Galleria and will create 10 new job opportunities in the capital.

Hamleys, who have been a household name for over 260 years, is dedicated to ‘bringing toys to life’ for children and families by enthusiastically encouraging fun and play within their store and offering engaging experiences through their expert toy demonstrators.

Nick Peel, Managing Director at St James Quarter said: “It’s really exciting to be welcoming another iconic brand to the St James Quarter family. We want to ensure that every visit to The Quarter is a delightful and memorable experience for the entire family and we really think that between the new Hamleys, and the already opened LEGO store, parents and children have lots to enjoy.

“Hamleys is so much more than just a toy shop, the brand focuses on bringing their games and toys to life adding an exciting experiential element to any shopping trip. Guests can celebrate birthdays and special occasions in style, and we are of course already eagerly anticipating what the festive season will bring with Hamleys!”

Mr. Sumeet Yadav, Chief Executive Officer - Global Retail Business, Reliance Brands Limited added:
“We are delighted to open soon at St James Quarter. Every year more than 10 million families visit us across the world for a unique Hamleys experience where we bring to life many Worlds of Play. Every visit to Hamleys is a reward in itself, the toy purchase is a bonus for the child. I am sure children will build lasting memories of fun and joy while adults will relive memories of their childhood at Hamleys in Edinburgh.”

This latest signing at St James Quarter, which recently opened the first phase of its retail, dining and leisure elements in June this year, underscores the Scottish capital’s global appeal and further bolsters the St James Quarter leisure offer.

A game-changing mixed-use development being delivered by Nuveen Real Estate, St James Quarter completes the distinctive offer of Edinburgh with over 80 new brands, an enticing mix of restaurants and bars, and will add a W Edinburgh hotel, a boutique Everyman Cinema, a Roomzzz Aparthotel, 152 New Eidyn residential apartments, and an unrivalled guest experience providing customers with an enviable events programme in a range of new and attractive public spaces.

Complementing an unrivalled shopping offer, which includes a host of brands including & Other Stories, Mango, Zara, Bershka, Pull & Bear, Stradivarius, Russell & Bromley, Miele, Next, H&M, JD Sports, John Lewis, and many more, St James Quarter is a premier food and drink destination. Providing a truly diverse offer - from fast food, fresh food, to family and restaurant dining including Bonnie & Wild’ new concept food hall to the development. The offer will be available over a number of locations throughout St James Quarter, each with its own unique look and feel.