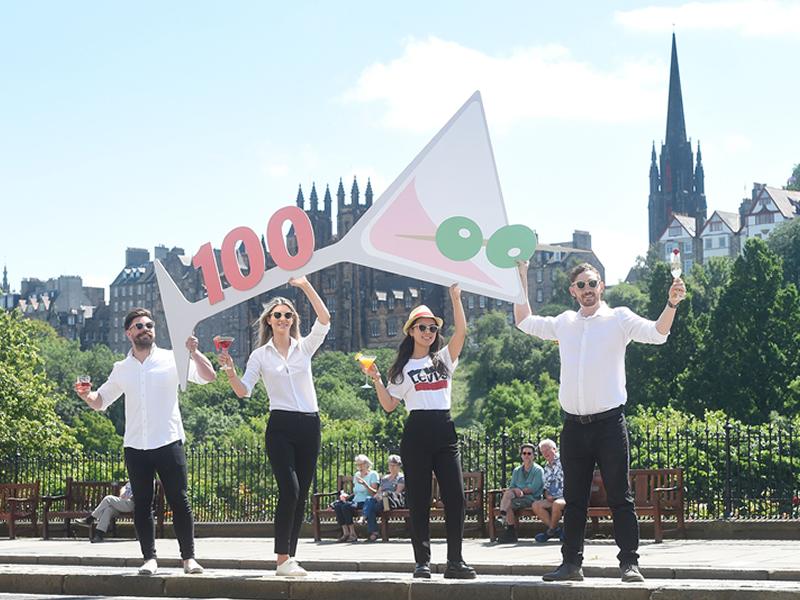 Taking place from Monday 11th – Sunday 24th October, wristband holders can take advantage of exclusive £4 Signature Cocktails at all 100 participating venues. Some of Edinburgh’s hottest new hangouts along with popular establishments and neighbourhood pubs have been confirmed.

Reappearing during the fortnight are some of Edinburgh most popular institutions including Tigerlily, Harvey Nichols, The Refinery, Cold Town House, Le Monde, Black Ivy, Candy Bar, Copper Blossom, Lioness of Leith, SkyBar, The Raeburn, The Basement and Tonic.

On top of a stellar bar line up, wristband holders can also visit the Cocktail Village at Festival Square and enjoy £4 cocktails from 20 pop-up bars alongside live music, DJs, street food and entertainment. Hendrick’s Gin, Jägermeister, Edinburgh Gin, House of Gods, Havana Club, Kahlua, Pickering’s Gin, Roku Gin, Wemyss Malts, Eden Mill, 4042, House of Suntory, Inspirited Gin, Mixtons and Whitebox are just some of the brands confirmed for this year’s Cocktail Village, with the full line up to be revealed in September.

Managing Director of Edinburgh Cocktail Week, Gary Anderson said:
“After what has been a tumultuous year, the return of Edinburgh Cocktail Week has been welcomed by bars across the city. We are delighted to be supporting so many independent businesses, local jobs and the wider recovery of Edinburgh’s hospitality and tourism sectors. The support from bars has been phenomenal and we are looking forward to people getting to experience the thriving bar scene we have here in Edinburgh”.

“Our aim is for festival goers to really make the most of it, we have bars taking part from the east to west of the city, with many new bars taking part for the first time, so not matter where you are in the city, you can take part in Edinburgh Cocktail Week.

“As well as welcoming more bars, we have extended this year’s festival to two weeks to spread footfall, helping us to deliver a safe, comfortable and enjoyable experience in the Cocktail Village and in the participating bars and pop-ups around the city. We have also increased the size of the Cocktail Village to allow for social distancing and added in additional ventilation and a completely transparent roof to allow in more fresh air and natural light - measures we know help keep people safe and give extra confidence in attending.”

In addition to the Cocktail Village and 100 participating bars, a programme of events and experiences will run throughout Edinburgh Cocktail Week 2021. The full programme will be announced in September, but organisers have hinted at Cocktail Crazy Golf, Boujie Bingo and a luxurious Cocktail Afternoon Tea. A series of ‘Prestigious Experiences’ is also being introduced to the festival in collaboration with the city’s most exclusive venues and award-winning mixologists. Due to the success of the rooftop Cocktail Domes that popped up in 2019, festival-goers can also expect a new pop-up experience in the east-end of the city – the exact location will be revealed over the coming months.

Wristbands for Edinburgh Cocktail Week are on sale now at www.edinburghcocktailweek.co.uk priced from just £8. There are three wristband options: WEEK 1, WEEK 2, or VIP. Wristbands are valid at the Cocktail Village for a full week (or both weeks with a VIP wristband) and are also valid at all 100 participating bars across the city for the entire duration of Edinburgh Cocktail Week.

For those who had already bought or carried over an ECW wristband, from 2020, they have been be automatically upgraded to a VIP wristband. This was confirmed in an email by Edinburgh Cocktail Week's ticketing provider, Citizen Ticket, earlier this year.

Every year, Edinburgh Cocktail Week injects over £2.5 million into the local economy, supporting 1000s of jobs in the hospitality and events sectors. Despite a significant increase in production costs as the festival extends to two weeks, these additional costs will not be passed onto visitors or participating businesses, instead Edinburgh Cocktail Week will absorb this cost as part of its commitment to support the recovery of Edinburgh's hospitality sector.