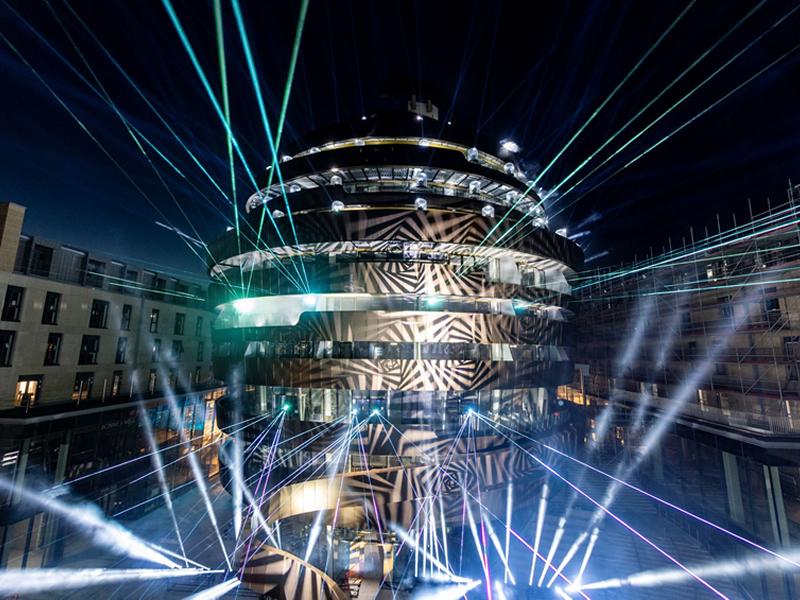 You can view highlights of the lightshow HERE

The countdown is on for St James Quarter’s’ much-anticipated phase one opening, and the new fashion district was officially welcomed to the city by some of the capital’s most famous landmarks. From the Balmoral and Edinburgh Castle to Forth Ports and the EICC, all roads led to St James Quarter as the whole of the night sky was illuminated- a symbol of this new city centre integration.

With its prime location in the heart of Edinburgh, St James Quarter is set to become a welcoming, cultural and lifestyle hub for art, culture, and fashion. Through long-term partnerships with Edinburgh Festival Fringe, Edinburgh Jazz & Blues and the Edinburgh Science Festivals – to name a few – the upcoming opening is set to complement the city’s world-renowned cultural offering and support its vibrant events calendar.

Inspired by the spirit of Arthur’s Seat and the meeting of tectonic plates, the light show represents the awakening of St James Quarter, after five years of development. Together with festival, tourism and cultural venues across the city, the display is a celebration of connectivity, bringing together landmarks throughout Edinburgh city centre, all leading to St James Square.

Over 500 light fixtures were placed around the ribbon building with accompanying projections and a soundtrack featuring local sound designer, Keith Fortune. Mick Hay from The Royal Edinburgh Military Tattoo took centre stage, 55m meters from the ground, conducting the soundtrack with the unmistakable sounds of the drums, as lasers of light travelled across the city in all directions.

“As we near the opening of phase one, the anticipation around the city is palpable. We wanted to bring this feeling to life, connecting with other landmarks, businesses, and partners across the city to mark our opening and cement our place on the iconic Edinburgh skyline.

“Our phase one opening is a significant moment in Edinburgh’s history, and we’re incredibly excited for the people of Edinburgh and beyond to see what lies behind the quarter. Last night’s display was just the beginning.”