Exhibitions mark the Battle of Prestonpans 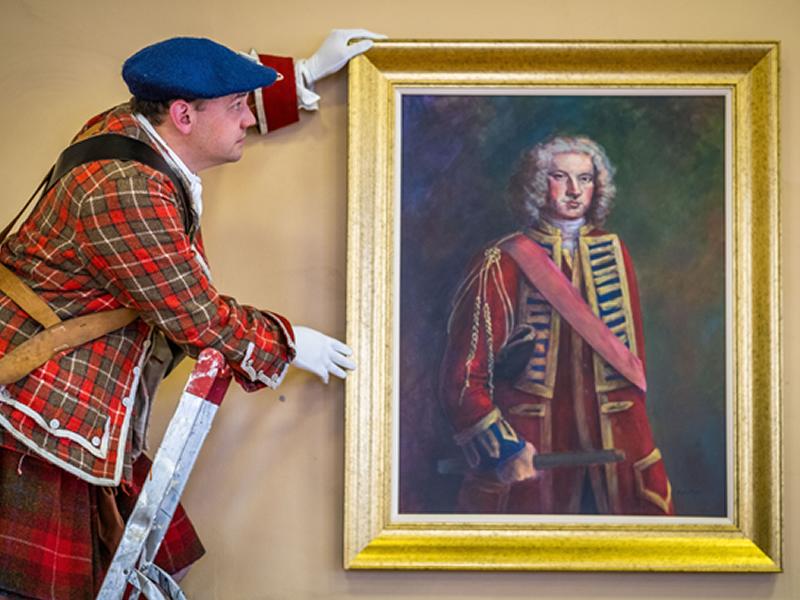 The Orders of Battle Exhibition and Open Day will be displayed at Prestonpans Town Hall over the weekend of 26-27 June (11am-4pm).

This special temporary exhibition is a chance to find out about the clans and regiments of the rival armies that fought at the Battle of Prestonpans, exploring the different types of soldiers who fought for and against Bonnie Prince Charlie at his famous victory. Alongside newly commissioned bilingual (in Gaelic and English) interpretation panels, a spectacle of 5,000 paper soldiers will be formed up for battle, and costumed volunteers will help explain the clothing and equipment used.

A further exhibition at the John Gray Centre in Haddington will take place from 7 August- 29 October, marking the cultural legacy of the Battle of Prestonpans. This will include 21st century paintings, Victorian engravings, 18th century artifacts, Jacobite songbooks and even a copy of the script of the 1948 film, Bonnie Prince Charlie, starring David Niven. Two separate remnants of the famous thorn tree, under which British army officer and local resident Colonel James Gardiner was mortally wounded during the famous battle, will be reunited and displayed together for the first time. Two supporting Gaelic cultural workshops with poetry and song will be convened by singer, actress, writer, broadcaster and campaigner, Dolina Maclennan.

Visitors to June’s The Orders of Battle 1745 Exhibition in Prestonpans will also be able to see the early progress of Prestonpans Town Hall's refurbishment and find out about the future plans for the historic building.

This exhibition is the first in a series of activities that follows the news this spring that The Battle of Prestonpans (1745) Heritage Trust has taken a five-year lease of Prestonpans Town Hall with an ambitious programme of activity and refurbishment.

The Trust is a registered charity promoting the Battle of Prestonpans, its rich associated heritage and its context in the larger Jacobite story for the benefit of both local and visiting audiences, school groups and the communities surrounding the battlefield. Prestonpans Town Hall, which was built in 1896-7 by public subscription and has always been treasured by the community, was mothballed and unused due to COVID restrictions – but now it’s back.

Local people are being invited to share their stories and photos of events and activities at the town hall, as part of a special memory collection project marking 125 years since construction began on the town hall.

Dr. Arran Johnston of the Prestonpans (1745) Heritage Trust said:
“As the Town Hall moves into a new phase of its life - as a museum and heritage hub focusing on the Battle of Prestonpans and its legacy - we are committed to researching, investigating, and celebrating the role the Town Hall has played in the community’s life since 1897. We’d love to hear local people’s memories and look forward to welcoming everyone to our first exhibition.”

The 125 Years of Memories project will collect and record the community memories and use them to inspire the creation of a new artwork. This will be displayed at the town hall along with interpretation exploring the history of this important and much-loved community building.

Those with memories they’d like to submit are invited to contact ajohnston@battleofprestonpans1745.org, or to get in touch via Facebook at @Prestonpans1745 - or to drop into the exhibition on 25 and 26 June and chat to the team direct.

The 125 Years of Memories project is part funded through a "Salt of the Earth: Preston-Seton-Gosford Heritage Connections" project, which is part of the National Lottery Heritage Fund Great Places scheme.

Both exhibitions and future open days at the Town Hall will comply with government Coronavirus guidelines to ensure visits are safe as well as enjoyable.

The Battle of Prestonpans was the first major battle of the last Jacobite Rising. The battle took place on 21 September 1745. The Jacobite army loyal to King James Francis Edward Stuart and led by his son Charles Edward Stuart (Bonnie Prince Charlie) achieved a dramatic victory over the Redcoat army loyal to the Hanoverian king, George II, which was led by Sir John Cope. The battle took place in fields between Prestonpans, Tranent, Cockenzie and Port Seton in East Lothian. The victory was a huge morale boost for the Jacobites, and despite their ultimate defeat the following year, the battle left an important cultural legacy.

The Battle of Prestonpans (1745) Heritage Trust works to mark this historical legacy through interpretation of the battlefield site, including signage in English and Gaelic. In recent years the Trust has installed new monuments to the fallen, commissioned major tapestries, opened a micro-museum, and developed on-site and digital interpretation for the battlefield, whilst touring its exhibitions around the world. The Trust is working towards the launch of a world class living history centre on the battlefield site as a way of institutionalising this activity, which will be told in the context of the whole Jacobite story. The Trust’s events to mark the 275th anniversary in 2020 were presented digitally but are now re-scheduled to take place face-to-face across 2021 with a major re-enactment of the battle set to be the climax of the programme on 18 and 19 September.

To find out more about The Trust or to register your interest as a volunteer, visit HERE