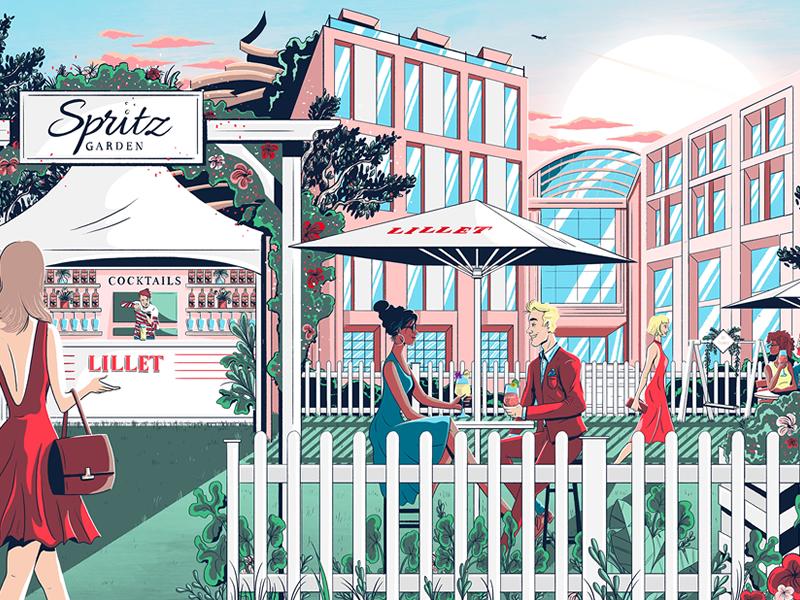 A striking new al fresco Spritz Garden at Edinburgh’s new St James Quarter is set to launch on 24th June by the team behind Edinburgh Cocktail Week, the same day that the vibrant shopping destination will open its doors for the first time.

Run in partnership with the French aperitif, Lillet, the two-month summer pop up will be placed on Register Square at the main entrance of St James Quarter, 24th June – 29th August, and will form part of a wider events series taking place in celebration of the St James Quarter phase one opening.

A luxury oasis to experience in the city this summer, The Spritz Garden takes inspiration from the dreamy lands of Southern France. Entering through a stunning floral arch, visitors will find a space adorned with flowers for capturing the perfect selfie moment, complete with a swing, cocktail cart and parasols to relax and sip cocktails under.

A team of expert mixologists have created a summer menu with a refreshing selection of Lillet spritz cocktails, sophisticated tipples and signature serves, complemented by a selection of premium spirits, champagnes, local beers, no/low options and London Essence mixers.

To mark the opening of the city’s St James Quarter, a special Ribbon Cocktail has been created using Lillet Blanc, Ki No Bi gin, honey, yuza saki and lemon, topped with champagne and garnished with a gold edible flower and lemon twist.

Gary Anderson, Managing Director of Edinburgh Cocktail Week said:
“St James Quarter is a major development for the city - one that will bring added vibrancy and colour to an already dynamic side of town, so we are thrilled to host our first-ever summer pop-up experience in such an exciting space.”

“This summer is all about catching up with friends, so ahead of this year’s Edinburgh Cocktail Week in October, we wanted to create an outdoor space for people to reconnect with friends over a cocktail in the sunshine. Together, with Lillet, our bar team have created an elevated menu of refreshing spritz style serves and classic cocktails that will transport guests to the floral lands of Southern France.”

Lillet is a refreshing wine-based apéritif with a fruity, floral taste, best served as a Spritz with a strawberry, mint and cucumber garnish. Established in 1872 in the wine cellars of Podensac (a small village South of Bordeaux), it is prepared by cellar masters still using the same 19th century techniques today.

Laura Stephen, Brand Director of Lillet said:
“Lillet brings a hint of French sophistication to those seeking a stylish and refreshing aperitif whilst relaxing in the sunshine, and we’re delighted to be partnering on The Spritz Garden at St James Quarter to bring some much-needed moments of conviviality to consumers this summer. At just 17% ABV, Lillet is perfectly positioned to cater to the growing consumer demand for sophisticated, low-alcohol spritz-style serves, and is delicious served with tonic, plenty of ice, strawberry, mint and cucumber.”

Nick Peel, Managing Director at St James Quarter, said:
“Not only are we counting down the days to our doors opening and revealing our vibrant shopping destination to the world, but we’re also ecstatic to be celebrating this moment through our partnership with Edinburgh Cocktail Week.”

“The Spritz Garden is part of a unique events programme in place for launch – which will include a host of activities to fill everyone’s social calendars - from foodies to families, we’ve really made sure there’s something for everyone to enjoy! More will be revealed soon!”

The Spritz Garden will be open daily from 11am – 10pm. The 80-cover space will operate on a two-hour reservation basis. There will be a £5 charge for pre-booked tables, with a limited number of tables available for walk ins with no reservation fee. Table service will be in operation with table-assigned hosts taking orders. All local authority and Scottish Government restrictions and guidance will be practiced at The Spritz Garden including Track & Trace, social distancing, PPE, hand-sanitising stations and regular cleaning of surfaces. The Spritz Garden will be open from Thursday 24th June – Sunday 29th August.

Reservations are now live and can be made via the Edinburgh Cocktail Week website: www.edinburghcocktailweek.co.uk/spritz-garden