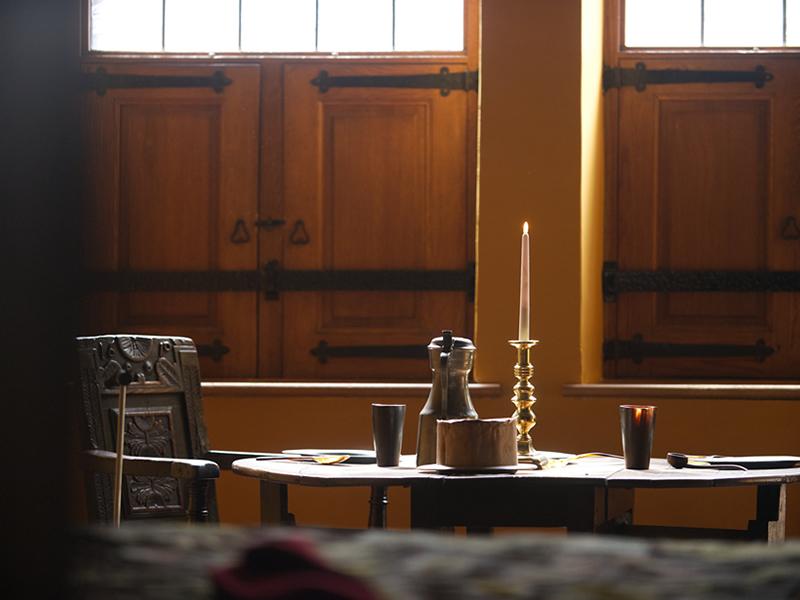 After opening to the public for the first time last month following a £1.5m restoration, the National Trust for Scotland’s Gladstone’s Land at the top of Edinburgh’s Royal Mile is introducing its first ever interactive historical food tour next week (Wednesday June 9).

Food is a strong theme throughout the 500 year old townhouse which now has a coffee shop and ice cream parlour on the ground floor, inspired by the building’s long history as a place of commerce and catering.

The ‘Tables Through Time’ tour follows the lives of three women that lived and worked at Gladstone’s Land, telling the story of changing tastes in food in Edinburgh’s Old Town and the impact of trade, class and fashion on people’s diets. As well as hearing about these people, the conservation charity will also be inviting guests to sample some of the food and drink these individuals may have consumed.

Claire Grant, the National Trust for Scotland’s Operations Manager for Edinburgh said: “It’s impossible to think about Gladstone’s Land without thinking of food. It has been at the centre of Edinburgh’s spice and coffee trade, it’s been a tavern, it’s been a home. From the ice cream flavours served to the spices that sit in the tables in the coffee shop, we’ve taken inspiration from the flavourful history of the building, its residents and its many uses over the centuries, to create a place people will love.”

Based on specially-commissioned research from Lindsay Middleton, PhD researcher in food history at the University of Glasgow and University of Aberdeen, the tour goes from a 17th century kitchen on the first floor, an 18th/19th century draper’s on the second floor and a 20th century boarding house on the third floor.

Visitors will get to taste the likes of bannocks sweetened with fruit, sugar or honey; parlies, a type of ginger biscuit named because they were a favourite with members of the Scottish parliament; and ‘donkey tea’, toast steeped in hot water.

After the tour, visitors can try out an ice cream flavour developed especially for the property. The elderflower and lemon curd ice cream has been created using research about the flavours and tastes that would have been associated with Gladstone’s Land over the years.

Food historian Lindsay Middleton said: “Historical food is something we are becoming increasingly interested in, whether it is history week on the Great British Bake Off or reading recipes in historical cookbooks and marvelling at strange ingredients and cooking techniques. Scottish food does have a rich and varied history. In the harsh climate, Scottish people have had to be creative with food.

“On the Tables Through Time tour, we look at three women who lived in Gladstone’s Land, and how food and drink figured in their lives. Considering the different foods that would have been cooked and eaten within the property throughout its history will show how food, life, and work have always been linked.”

Tickets for the tour can be booked at https://nts.cloudvenue.co.uk/tablesthroughtime

For more information about Gladstone’s Land, go to
www.nts.org.uk/visit/places/gladstones-land