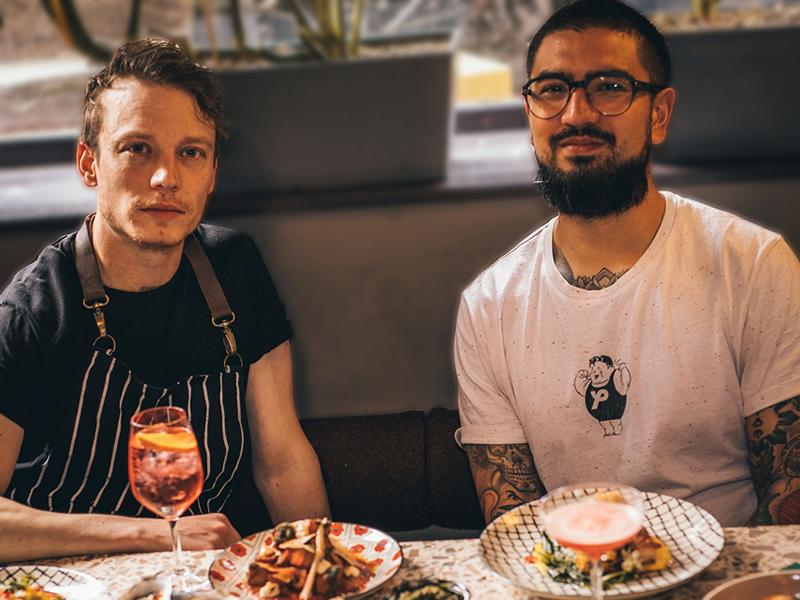 A top Edinburgh chef who has cooked for some of the world’s biggest music stars, including Taylor Swift, Demi Lovato, Metalica and Dire Straits’ Mark Knopler, is bringing his own brand of Latin flavour and style to the capital’s New Town from the end of May.

Chef Scott Wyse (34) has teamed up with well-known Edinburgh mixologist, Mike Lynch (31), and a team of five to launch the 40-cover Superico Restaurant at 83 Hanover Street from Thursday 20thMay and 180 capacity Superico Bar and Lounge at 99 Hanover Street from late June.

The style of Superico’s two new venues is influenced by the big, bold flavours of South America, which Scott has experienced first-hand on his travels south of the equator in recent years.

Signature South American dishes on the new Superico menu will include ceviche and crudo inspired by Nikkei cuisine in Peru, beef cheek with mole from Oaxaca in Mexico and fresh mojo sauces inspired by Chile.

With over 30 years combined experience between them, Scott and Mike were part of the team that launched the Devil’s Advocate restaurant and bar in Edinburgh’s Old Town in 2013.

Scott started his culinary career at the age of 15 and worked his way up through some of the capital’s most respected restaurants, including The Witchery by the Castle and The Tower Restaurant.

In his spare time, Scott is interested in bee keeping and horticulture, but his main focus is bringing his unique creativity to the kitchen.

Scott has also been inspired by his four-year stint heading up the catering for global music stars at the MTV Music Awards in London, Seville, Bilboa and Rotterdam. Later this year, Superico Bar and Lounge plans to launch live DJ sessions at weekends with a sound system and turntables made by Matersounds and speakers by Void acoustics.

To help complement the Latin menus, both Superico venues have been transformed by top maximal design studio, JA!COCO!, which has created a casual, but sophisticated environment to excite foodies, cocktail lovers and style gurus alike. Edinburgh-based JA!COCO! on Haymarket Terrace was selected amongst 20 global studios for the 'Emerging Interior Design Studio of the Year’ award by the world's biggest and most popular design magazine, Dezeen.

Mike is a hospitality manager and multi award-winning mixologist, having won the title of ‘UK’s Best Cocktail Bar for Edinburgh’s Bramble Bar in 2019 and representing the bar in numerous industry events and takeovers in cities such as London, Copenhagen, New York and Denver in the United States.

Mike specialises in drinks and menu development. He has over 11 years’ experience operating bars and restaurants in Edinburgh.

At Superico, Mike plans to focus on aperitivo-style drinks with a section for spritzes and Martini’s served straight from the freezer, as well as speciality wines from around the world served by the glass.

Commenting on the launch of Superico Restaurant and Superico Bar and Lounge, Mike Lynch, said:

“We can’t wait to bring a unique South American flair to Edinburgh’s Hanover Street. Expect a fun, vibrant and stylish setting across both of our two venues with outgoing, knowledgeable and attentive service.

“Guests will enjoy hustle and bustle in the restaurant where they’ll get the chance to see the bar and kitchen team work side by side in the open space to the rear of the restaurant.

“With our sights firmly set on the launch and growth of both our venues, Superico has the ambition to quickly become a well established social venue in Edinburgh with global recognition.”

“I’m not just looking at the typical styles and flavours that you may associate with South America, but also how other cultures have influenced them such as Nikkei cuisine which is the Japanese influence on Peru.

“Expect some niche flavours, but I will make them approachable and fit the fun and relaxed atmosphere.”

Superico Restaurant at 83 Hanover Street is due to open on Thursday 20th May from 5pm. Open Wednesday to Friday from 5pm, Saturday from 12pm and Sunday from 11am. Aperitvo will be on offer until 6pm every day the restaurant is open, including two small plates and a cocktail for £18.