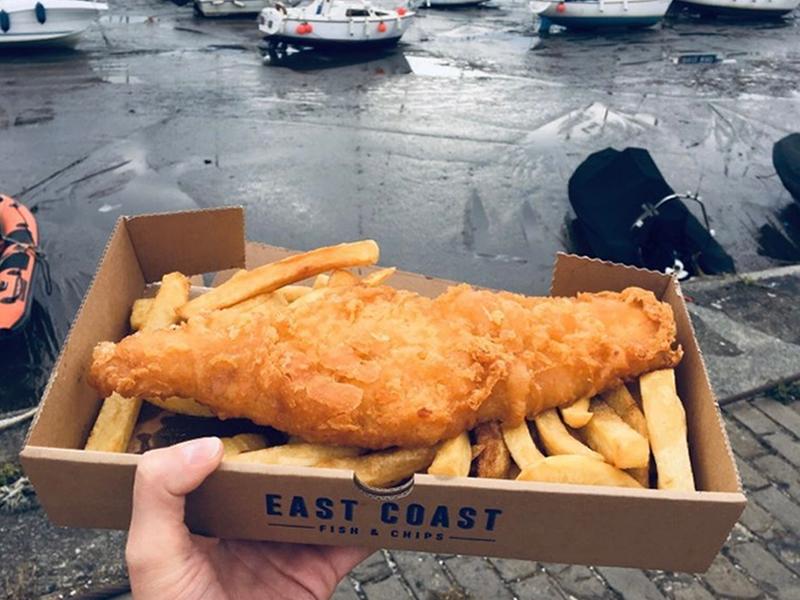 One of East Lothian’s most popular family fish and chip shops has been crowned one of the UK’s 50 Best Fish & Chip Takeaways of the year for the second year running and the only chippy in Edinburgh and the Lothians to make the prestigious list.

The accolade follows an extensive search by leading trade publication Fry Magazine to find those chippies serving up the finest fish suppers amidst a tough and challenging Covid year.

To make the 50 Best, East Coast on Musselburghs North high street had to impress a mystery diner who visited unannounced and marked the chippy on over 40 aspects of their business, from the quality of the food and customer service to their social media presence and their Covid safe practices.

East Coast scored an impressive 97% with the mystery diner particularly praising the freshness and crispness of the batter and the flakiness of North East Atlantic haddock, as well as the environmentally friendly packaging, the smart and professional staff, and covid safe measures.

Just a short walk from Fisherrow Harbour and Musselburgh beach, East Coast is the ideal foodie venue for families to enjoy award-winning Scottish fish and seafood in the fresh sea air.

Owned by Carlo and Katia Crolla, East Coast is the next chapter for the Crolla family, who have been serving the honest folk of Musselburgh from its venue on North High Street since 1974. Styles may change, but great flavours, family heritage and warm, friendly service remain as important to Katia and Carlo today as they did 47 years ago.

“We’re over the moon to have been named one the UK’s 50 best fish and chip takeaways for the second year running and add yet another great award to our collection.

“It’s also a real honour for us and the whole East Coast team to have been recognised as the only fish & chips takeaway in Edinburgh and the Lothians to land a place on this list and help put East Lothian on the map as a real foodie destination.

“It’s quite common for businesses in smaller towns like Musselburgh to be overlooked in UK-wide competitions and not get the recognition they deserve, so it’s an amazing feeling to be able to successfully represent a business from Musselburgh on a national level in a competition with such a high benchmark.

“We’re committed to having a friendly team, being dedicated, having great knowledge of the industry whilst continuously wanting to improve, having very high standards and knowing what a consumer wants.

“We would like to dedicate this award to all our loyal customers, friends and team members who have supported us during a very challenging year and look forward to welcoming everyone back properly as restrictions are eased.”

“Without doubt, the last 12 months have been tough for fish and chip takeaways and many will not have dealt with this level of crisis management before.

“Allowed to stay open during the pandemic, there was a lot they had to implement in a very short space of time to operate in a Covid safe manner. Many had to flip their businesses to click and collect and delivery, serve at the door, introduce card payments and work in much smaller teams, but they did and they kept the nation fed including our elderly and vulnerable, those shielding and our key workers.

“This year’s judging criteria took into account these changes and we’re delighted to acknowledge that, despite the difficulties and added pressure, East Coast never let standards drop. During this pandemic they have been at the heart of their communities, with a smile on their faces and hot food in their hands. We’re proud to have them in our 50 Best Fish & Chip Takeaways for 2021.”

East Coast is also home to a popular Seafood & Grill restaurant, which is due to reopen at the end of April 2021 as soon as lockdown restrictions have been lifted.

The National Trust for Scotland is preparing to welcome visitors again at dozens of gardens and estates across the country this Spring!

As the Lothians prepares for the Easter weekend, 2nd to 5th April, some of the region’s leading independent and family-run restaurants, cafes and bars have unveiled their special Easter menus.

Dobbies teams up with the RSPB for latest podcast episode

Dobbies has teamed up with the UK’s largest nature conservation charity, the RSPB, for its latest podcast episode - filled with advice on how to care and protect our garden wildlife.

Come together for the National Day of Reflection

Let's come together today to reflect on our collective loss, support those who've been bereaved, and hope for a brighter future.

Discover the edible plants you can grow on your doorstep, as brand new collection of edible roses lands in Dobbies stores across the UK.

The popular Paisley Food and Drink Festival is taking a different shape for 2021 – with a tempting online programme across nine days this April!

Dobbies has announced a programme of exclusive virtual events this Spring, to help gardeners of all ages and abilities take their green spaces to the next level.

Emerging Edinburgh artist Isla Ratcliff has announced her debut single Cannot Steal The Sound. Set for release on Tuesday 23rd March 2021, the single will mark one year since the start of lockdown.