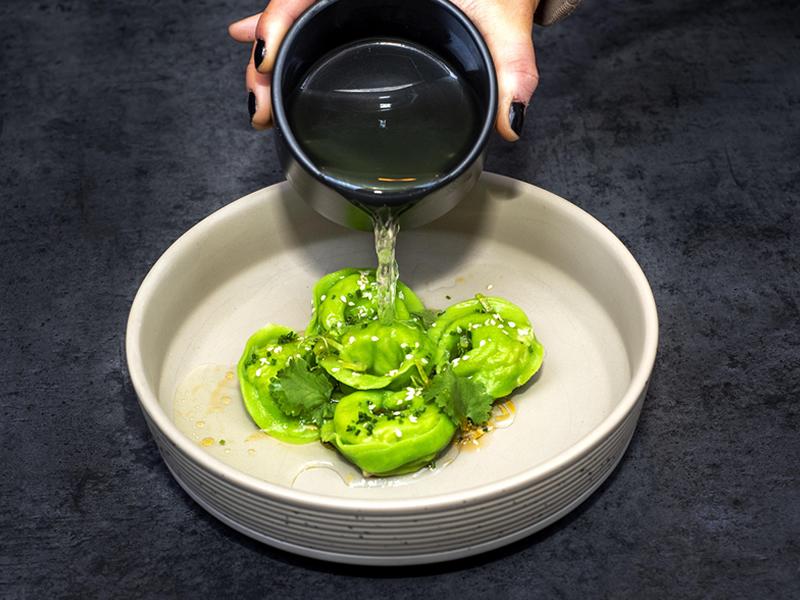 Rainbow spring rolls and brightly coloured dumplings: Could Edinburgh’s newest street food venue be the most Instagrammable in the capital?

The launch of Ozen Street Food brings a fresh new pan-Asian flavour to the city.

The capital’s newest and most colourful culinary experience is sure to be a hit on Instagram, but make no mistake – Ozen Street Food is anything but style over substance. The quirky multi-coloured dishes are more than matched by the full-on fresh flavours within. Get ready for rainbow spring rolls and brightly coloured dumplings, all freshly prepared using locally sourced ingredients and coupled with a range of special secret sauces. It’s a colourful twist on classic Asian flavours, all served up with a thoroughly modern Edinburgh edge. It’s what the city’s foodies have been waiting for.

Located in the heart of the capital, on Rose Street North Lane, Ozen Street Food offers a contemporary take on pan-Asian cuisine and offers a concise and carefully considered menu. Highlights include bao buns stuffed with a choice of tender fried chicken, juicy prawns, moreish halloumi, or fresh cauliflower filling, and served with a selection of secret recipe homemade sauces. The vivid and vibrant Vietnamese-style spring rolls are set to be a winner. And those with a sweet tooth will be hard pressed to say no to a fried bun bursting with Nutella, matcha or orange blossom cheesecake. Plus, there’s the added bonus of the fortune cookies that come with every order – which will either contain inspirational words of wisdom or a discount code for a future order for the lucky ones.

The Edinburgh eatery is the vision of Chris Thomas, 23, and Mahdi Ben Hamou, AKA ‘Mezzo’, 25 – a self-confessed food-obsessed pair who both hail from the city and who met whilst DJ’ing. Their ultimate aim is to add a new dynamic to the capital’s food scene and offer a contemporary take on pan-Asian flavours.

Commenting ahead of the launch, co-owner Chris explained; ‘The flavours, the brand, the energy of what we’re bringing to Edinburgh is totally new. There’s nothing else like this. The menu is bold, the presentation is playful, but most importantly the flavours are fresh and full’.

‘And it’s authentic,’ continues Mezzo; ‘We’ve had a lot of fun preparing the menu, and I think that really shows, but despite the quirky edge we’re injecting into it all, we’re remaining true to the essential flavour combinations that will give each of our dishes that unmistakable Asian kick’.

Ozen Street Food opens to the public on Saturday 10th April. Their full menu will be available to take away from the venue at 52 Rose Street North Lane, Edinburgh, and to order for delivery via Deliveroo, Just Eat and Uber Eats.

The National Trust for Scotland is preparing to welcome visitors again at dozens of gardens and estates across the country this Spring!

As the Lothians prepares for the Easter weekend, 2nd to 5th April, some of the region’s leading independent and family-run restaurants, cafes and bars have unveiled their special Easter menus.

Dobbies teams up with the RSPB for latest podcast episode

Dobbies has teamed up with the UK’s largest nature conservation charity, the RSPB, for its latest podcast episode - filled with advice on how to care and protect our garden wildlife.

Come together for the National Day of Reflection

Let's come together today to reflect on our collective loss, support those who've been bereaved, and hope for a brighter future.

Discover the edible plants you can grow on your doorstep, as brand new collection of edible roses lands in Dobbies stores across the UK.

The popular Paisley Food and Drink Festival is taking a different shape for 2021 – with a tempting online programme across nine days this April!

Dobbies has announced a programme of exclusive virtual events this Spring, to help gardeners of all ages and abilities take their green spaces to the next level.

Emerging Edinburgh artist Isla Ratcliff has announced her debut single Cannot Steal The Sound. Set for release on Tuesday 23rd March 2021, the single will mark one year since the start of lockdown.