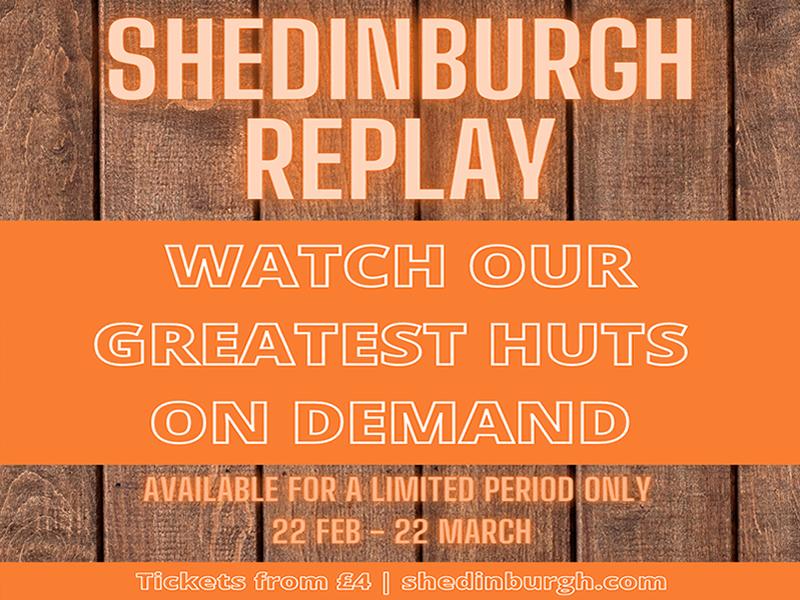 Due to popular demand SHEDINBURGH are today announcing REPLAY a ‘GREATEST HUTS’ collection of fourteen shows, available to stream globally from 7:30pm on Monday 22nd February for a minimum ticket price of £4 in order to raise even more money for artists through their SHED LOAD OF FUTURE fund.

In 2020 Producers Francesca Moody and Harriet Bolwell and writer/performer Gary McNair conceived the inaugural SHEDINBURGH FRINGE FESTIVAL, an online festival of the best of the Fringe stalwarts of theatre, music and comedy, all performed live from two sheds at the Traverse Theatre in Edinburgh and Soho Theatre in London as well as remotely at artists own sheds and streamed into people’s homes over August.

Created as a directed response to the uncertain future facing both venues and artists in 2020, SHEDINBURGH’s objective was to shout loud about the Fringe’s vital role in global culture, celebrate its past successes and breakthrough artists and provide a platform for the talent that would have been on had the Edinburgh Festival Fringe not been cancelled.

Launched just 8 weeks after the initial idea came to the team, SHEDINBURGH captured the hearts of Fringe fans from across the world from Edinburgh to Adelaide to Tokyo and Texas, selling over 4,500 tickets to 25 events, with all proceeds going into the SHED LOAD OF FUTURE fund to support new artists who want to bring their work to the Edinburgh Fringe.

Gary McNair said: “Performing McGonagall’s Chronicles in the Shed for Shedinburgh will live long in my memory as a bright light in the darkness of 2020. We’ve all missed so much of what we love for the last year and for so many of us that’s been theatre and the arts, which have been forced to a near standstill. Performing this live from the magical wee shed, knowing people were watching together but separately in their homes reminded me of the importance of what we do. I hope that these encore streams can bring a bit more of that to people and help us raise even more money for future artists.”

Deborah Frances-White said: “I’m delighted that my Shedinburgh offering in the form of ‘Deborah Frances-White Rolls the Dice’ - my Writers’ Guild Award winning show (stop going on about the award - everyone - it’s embarrassing!) is getting to pop on a tiara and some heels and take a spin around the internet when I’m not even allowed to go to the pub. I’m jealous of my own show because of the social life it’s going to have. I hope you enjoy my Nancy Drew-style treasure hunt for my own genetic heritage and the twists & turns of my DNA. Thank you Shedinburgh for sharing my fireside tale this winter lockdown.”

Rosie Jones and Helen Bauer said: “We are very excited to be re-sharing our Shedinburgh show, “Big Daddy and Baby Helen” with you all. We haven’t been THIS excited since ‘Shrek’s Adventure London’ opened on the Southbank in July 2015. We thank the Lord that Helen’s grandparents saw the opening of ‘Shrek’s Adventure London’, but, alas, they passed away before seeing this ground-breaking Shedinburgh show. We hope it streams in heaven.”

SHEDINBURGH will return in the summer of 2021 with a brand new programme of theatre, comedy, music and talks. SHEDINBURGH producers Francesca Moody, Harriet Bolwell and Gary McNair said: “Last year we were bowled over by the audience response and appetite for shows in the shed, with people streaming from across the globe it truly felt like we were able to democratise our corner of the Fringe. With the continued challenges facing the arts and live performance we are fired up to offer an online festival that’s even bigger and better than last year and one that can happen regardless of whether we are able to gather in theatres or not. We want to continue to platform artists, share great fringe work with the world and raise money to support the next generation of fringe performers through our Shed Load of Future Fund. Shedinburgh 2021 is coming and we’re excited to share it with you.”

All GREATEST HUTS performances will be streamed via Ticketco from 7:30pm on Monday 22nd February – Monday 22nd March.

Tickets will be available on a pay what you can model for a minimum price of £4.