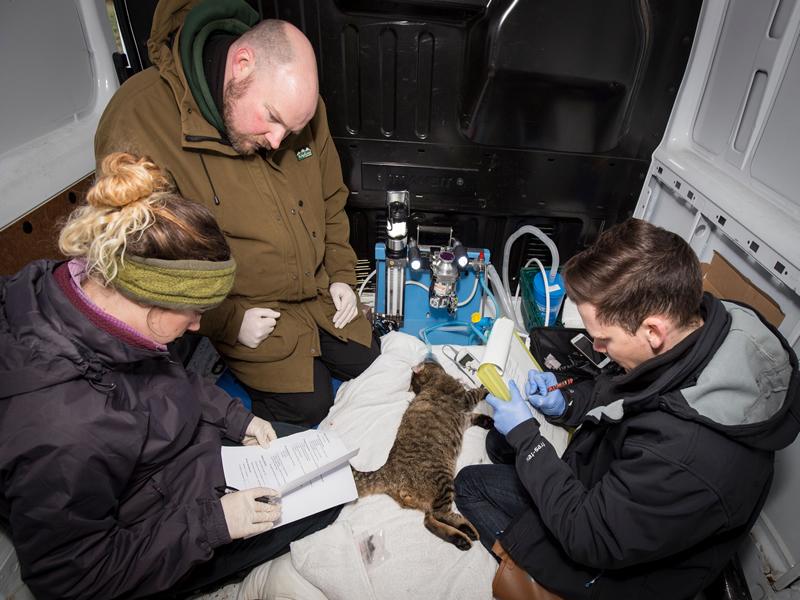 The Royal Zoological Society of Scotland (RZSS) and National Museums Scotland are playing a central role in the establishment of the UK’s first national zoological biobank with the launch of their biobank facilities. Located at the National Museums Collections Centre and Edinburgh Zoo, the infrastructure will improve storage and distribution of animal genetic material for conservation and research.

The national biobank is providing a hub for scientists across the UK, giving them access to tissue, cells and DNA from endangered species and other wildlife, which can be used in research and for conservation planning.

The Scottish zoological biobank hub is being developed as part of the CryoArks Biobank, funded by a £1 million grant from the Biotechnology and Biological Sciences Research Council (BBSRC). The project brings together Cardiff University, the Natural History Museum, National Museums Scotland, RZSS, University of Edinburgh and the University of Nottingham to expand and link collections across the UK.

The CryoArks initiative is led by Professor Mike Bruford of Cardiff University who said:

“CryoArks is making a step-change in the way that genetic material is curated and is making it available to more scientists.

“With the world facing unprecedented challenges for our wildlife and climate change, having access to this data will help us find solutions to protect our planet and its endangered species.”

As Biobank ‘hubs’, National Museums and RZSS will provide the expertise for a new level of sample storage and access to their samples by the establishment of ultra-low temperature freezer facilities, laboratory space, and making all samples available through an online searchable database. As a CryoArks partner, they offer on-site assistance in archiving sample material, and provide advice on embedding biobank sample collection during routine veterinary care and fieldwork.

Genetic data helps us understand a great deal about our planet, such as measuring shifts in biodiversity, discovering biological adaptations to climate and habitat change, and finding out why particular species have unusual characteristics. The samples held in the Biobank enable conservation researchers and scientists, now and in the future, to access genetic material such as DNA from a wide range of species, including those that are rare, endangered and extinct-in-the-wild, to help ensure their future survival.

“This project is crucial in enabling researchers to engage with a vast resource of biological data samples which until now was difficult to access.

“We have a responsibility to future generations to ethically collect these biological samples, store them in appropriate conditions and make them available for research. These specimens are vital to our understanding of the natural world and our ability to map its changes and respond effectively to the demands of researchers working in conservation and ecology.”

National Museums Scotland has been collecting tissue samples from animals donated to the collection for more than 25 years and this legacy of several thousand samples has been added to the biobank, enabling quicker and easier access for scientists across the UK.

“Well managed sample collections are critical research tools which can be used to improve conservation outcomes for many threatened species. We are extremely grateful to the multitude of researchers and zoological institutions who are contributing samples that can be used by scientists for the benefit of wildlife around the world.”

Wildlife conservation charity RZSS also has a partnership with the European Association of Zoos and Aquaria (EAZA) and it is one of the four hubs, alongside those in Denmark, Belgium and Germany, of the EAZA Biobank. This is an initiative to increase collection, curation, storage and use of valuable genetic resources from animals held in EAZA institutions across Europe and the Middle East for the purposes of population management and conservation research. The ultimate goal is to biobank a sample from every living zoo animal so this data can be accessed for future conservation management and research.