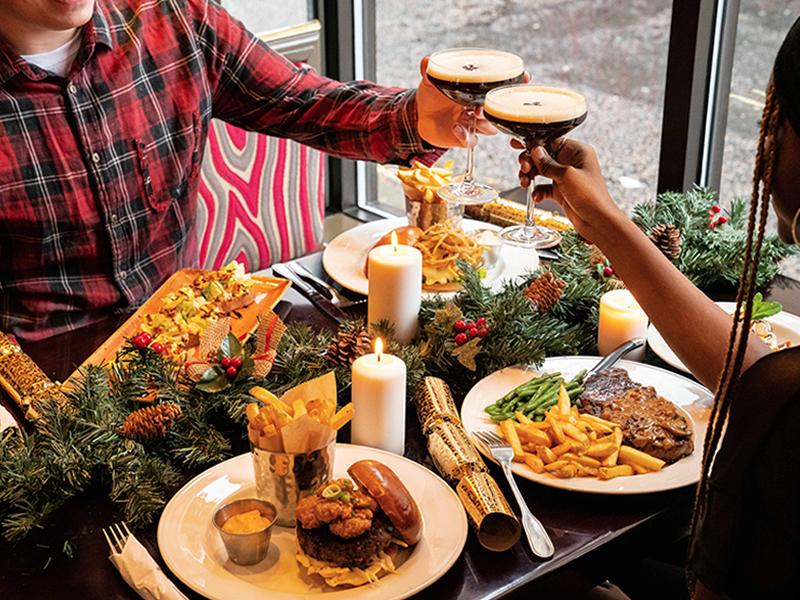 The popular menu, which is valid until Sunday 10th January at Hard Rock Cafe Edinburgh, allows guests to choose from core menu favourites like the New York Strip Steak with Marinated Mushrooms, a New York style grilled steak grilled and topped with mushrooms marinated in a smoked bacon and tangy bourbon sauce, as well as limited-time items such as the Blue Cheese Salad appetizer, Surf & Turf Burger, signature steak burger topped with delicious One Night in Bangkok Spicy Shrimp™; Hard Rock’s mouth-watering take on the classic surf and turf and the Mushroom Swiss Burger, served with seasoned fries and chipotle aioli. Those with a sweet tooth can indulge in a Holiday Brownie dessert, served with caramel and chocolate sauce, and topped with whipped cream.

Guests can choose from a two-course meal priced at £27.95 or go all out with the three-course set menu from £30.95. To make your booking for the Kiss Me Under the Mistletoe Menu visit www.hardrockcafe.com/holiday-mistletoe-menu.aspx now. Those who are seeking a spontaneous dining experience whilst out in the city, can visit the restaurant where Hard Rock Cafe Edinburgh will book them dependent on capacity.

In line with the latest Scottish Government regulations, the SAFE + SOUND program implemented at Hard Rock Cafe Edinburgh will ensure guests can enjoy their food and drink in a safe and sanitary environment. Hard Rock International partnered with world-renowned public health and safety organizations like EcoSure, an Ecolab Division, and NSF International, formerly known as the National Sanitation Foundation, to ensure its properties are SAFE + SOUND, meeting the highest standards of safety, sanitation, food handling and employee training. The enhanced SAFE + SOUND safety protocol includes but is not limited to procedures such as a state-of-the-art, non-intrusive thermal temperature screening process before entering, social distancing measures and protective mask requirements for all team members.

For additional information about Hard Rock Cafe or to make a reservation, visit www.hardrockcafe.com