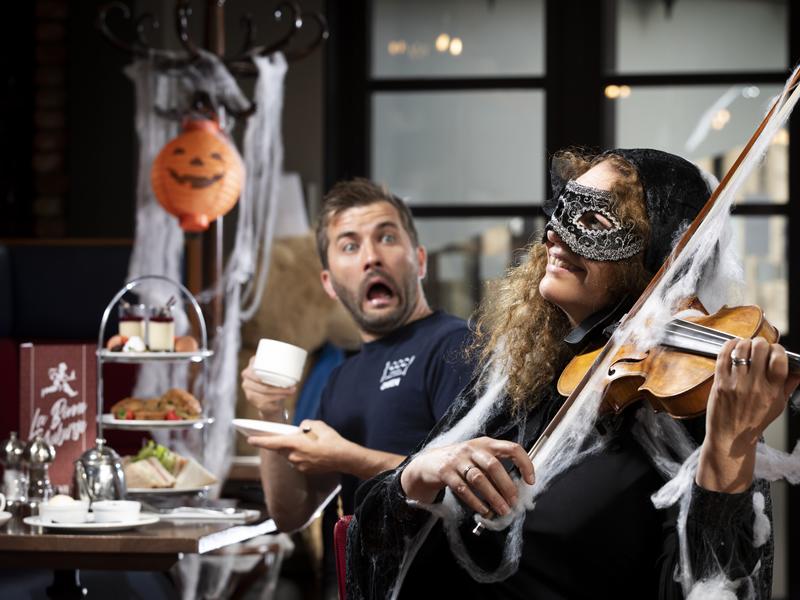 Children’s Classic Concerts’ Presenter and percussionist, Owen Gunnell, is preparing to walk the eerily empty corridors of the Caird Hall, Dundee - he’s looking forward to dusting off the cobwebs and unpacking his percussion gear. But, is all as it seems, or is there something strange going on?

In a unique digital presentation of Children’s Classic Concerts popular Halloween collaboration with the Royal Scottish National Orchestra, CCC has created an innovative production that embraces the challenges faced by the cultural sector at the current time.

With the Caird Hall opening especially for the filming and for the first time since the start of lockdown, CCC were able to take advantage of an empty concert hall and the technical wizardry that filming affords to create an engaging presentation of orchestral music. Featuring both soloists from the RSNO and a reduced, socially distanced orchestra of 20, The Haunted Concert Hall invites the family audience to view the orchestra as it is rarely seen.

The film will reach families not just in the central belt of Scotland but UK-wide making orchestral music free and accessible regardless of limitations on live performances due to COVID.

Many of the most popular aspects of CCC’s Halloween concert will continue to feature prominently. Students from the University of the West of Scotland have animated drawings created by CCC’s young followers which will feature during ‘In the Hall of the Mountain King’, the RSNO Junior Chorus will appear via a virtual meet up and the much-loved costume competition will go ahead with entries to be posted on the CCC’s facebook page (participants must be photographed whilst watching the film!). The winning entry will receive a private virtual concert/workshop session with Artistic Director, Owen Gunnell

Children’s Classic Concerts Artistic Director/Presenter Owen Gunnell said: “Even though we are sad not be presenting our Halloween concerts live on stage this year, getting let loose in a huge empty concert hall like the Caird Hall was an opportunity we couldn’t miss. Some of the corridors backstage were pretty spooky even before we gave them the Haunted Concert Hall treatment! We can’t wait for families to settle down (not too comfortably of course…) on 31st to watch - hopefully we can spread a little bit of CCC silliness, share some incredible performances and get everyone in the Halloween spirit!”

Director of Concerts and Engagement at the RSNO, Bill Chandler, said: “Halloween is going to feel different this year without outdoor trick-or-treating, so we are excited to be a part of this safe and fun way to celebrate the spooky season, completely free-of-charge for families across the UK. We are so proud of young people across the country who have been so brave this year, but I think even this bold new generation will be spooked by some of the encounters Owen faces in The Haunted Concert Hall. Our musicians and Junior Chorus have had a lot of fun being involved in this performance, as we always do with Children’s Classic Concerts, and can’t wait to tune-in for the concert on Halloween.”

Since 1994, Children’s Classic Concerts has reached 400,000 children and their families. With the aim of providing inspiring and engaging introductions to orchestral music, our concerts encourage active audience participation and sing-alongs, educating young audiences in a fun and informal atmosphere. CCC concerts are devised for children age 4 – 12 but loved by every generation.

Children’s Classic Concerts’ The Haunted Concert Hall will premiere live on CCC’s facebook page and youtube channel on 31 October 2020 at 2pm. It will be available to watch for 30 days. The concert will be free to view but donations to CCC will be welcome via text and paypal through CCC’s website childrensclassicconcerts.co.uk