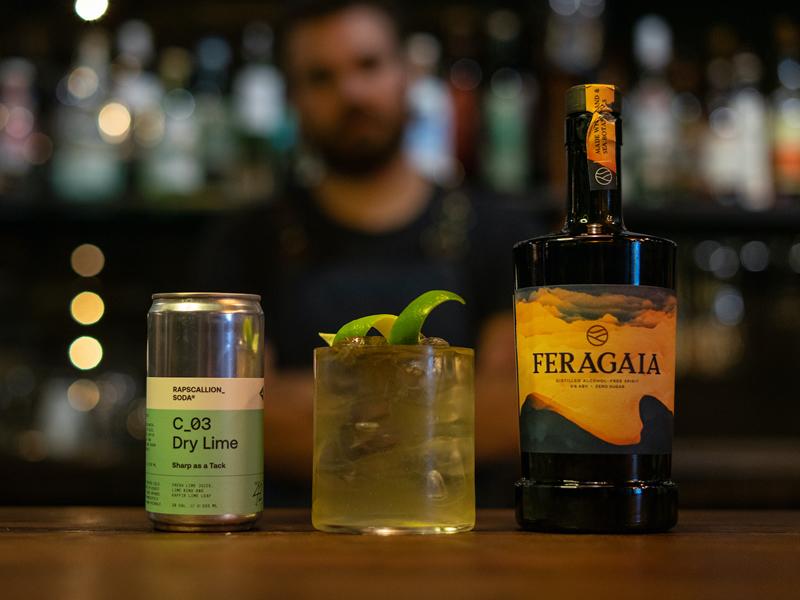 Specialist soft drinks manufacturer - Rapscallion Soda has collaborated with Scotland’s first alcohol-free spirit - Feragaia, to give a fresh perspective on the way we drink and to offer up alternatives for anyone giving up alcohol for the month.

Launching a series of delicious alcohol free serves the exciting collaboration focuses on Scottish provenance and sustainability which also sees both innovative Scottish brands donating £1 per online sale towards MacMillan Cancer Support during the month of October.

When it comes to not drinking, like-for-like substitution is the simplest route to stay on track. Fans of a Dark & Stormy will love their ‘Dreich and Stormy’ which teams Feragaia, sweet honey, a splash of lime juice and Rapscallion Ginga Ninja finished with a vibrant red chilli for a refreshing long hit.

And sometimes you can’t beat the classics. With a reputation built on creating low calorie sodas that use fresh, raw ingredients with unusual taste combinations, the Rapscallion core range doesn’t disappoint.

Try their alcohol free perfect serves for a change to the ordinary and experience the sophisticated simplicity of their soft drinks. Their best selling Core Range includes zesty and spicy flavours such as Dry Lime, Burnt Lemon and Ginga Ninja.

Gregor Leckie, founder of Rapscallion Soda, explains: “It’s always been our mission to get people across the UK drinking better-tasting drinks and ones that are good for you too. I hope that our collaboration with Feragaia encourages the public to try something exciting this October.”

Jamie Wild, Co-founder of Feragaia said: “Rapscallion Soda is an industry trailblazer and we’ve forged a friendship through provenance and a shared vision of how things should be made. We’re excited to collaborate to encourage people to try something new and also help support such a fantastic charity initiative by MacMillan Cancer Support.”

Those wishing to support the fundraising effort can do so by donating £1 on any online order during October at www.rapscallionsoda.com or www.feragaia.com. The two brands will then also match each donation made during this period.