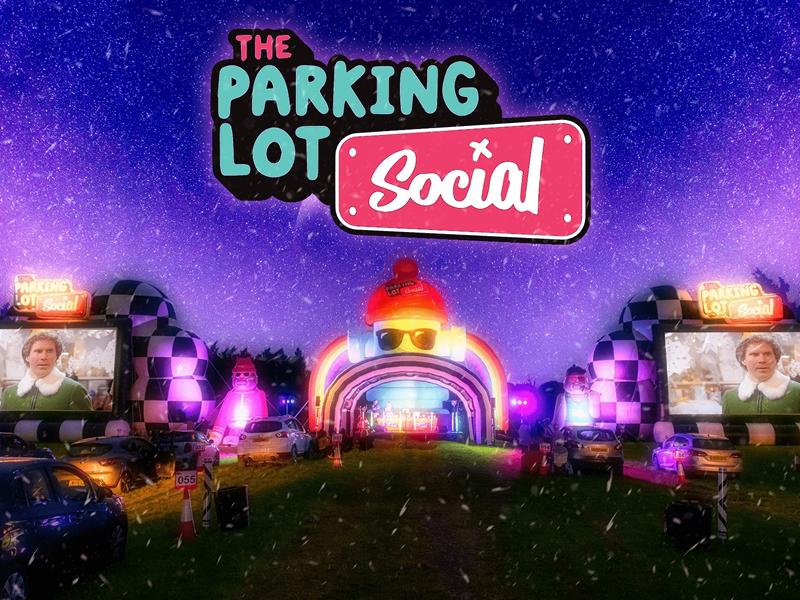 The Christmas events that Covid can’t cancel, drive-in festival The Parking Lot Social is coming to town with the biggest, boldest parties this December.

Tickets are now on sale for the Winter Festival taking place in Edinburgh’s Dalkeith Country Park and Glasgow’s Skyport Airport Parking, running from the 16 December right up until Christmas Eve. After selling out events in each city all through the summer, The Parking Lot Social team have put together a gloom-busting programme of films, party shows and family events.

And with theatres set to be closed over the winter months, organisers have announced the first Parking Lot Pantomime. Oh no they haven’t, oh yes they have! Keeping the centuries-old tradition of the Christmas panto alive, jump in the car and get ready for a socially distant, uproarious live show.

Organisers have commissioned a brand new, 2020 drive-in version of panto classic Cinderella, with all the essential elements that make the tale so special, as well as a few twists unique to the special ‘drive-in’ format.

A troupe of nine professional actors will melt hearts as audiences follow Cinders on her adventures, helped by the Fairy Godmother. The specially written show has song and dance routines a-plenty, audience participation galore and a script that takes a light-hearted dig at some of the challenges thrown up by this strangest of years. As it's a drive-in event the organisers have gone that extra mile and will have a crew filming the action and broadcasting the panto from the stage directly onto two massive 40 foot screens meaning that there's not a bad seat in the house.

Safety is at the heart of the event and audiences take part in the immersive, interactive shows from their own cars. It’s a completely contactless event ensuring a safe and socially distant experience. Organisers set up strict cleaning and distancing rules for the summer events and the plans in place for the winter events exceed new regulations.

Famous for their vast inflatable sets, The Parking Lot Social Winter Festival will feature a 60ft tall rainbow coloured Christmas tree, a giant DJing Santa Claus and the coolest Reindeer to have ever left the North Pole.

A magical selection of classic and modern Christmas movies for all ages will be shown on two gigantic screens with the sound broadcast straight to cars. Forget the dull trailers, DJs and MCs get the audience in the mood before the main feature and look out for a few extra surprises along the way.

The Christmas night out gets the drive-in treatment with the ‘Big Weekender’. You can’t share a car but you can park next to people you know and let loose. Get your dancing shoes on, your singing voices warmed up, your dabbers in your hands and your thinking caps on for the famous Silent Disco, Live Cam ‘Car-A-Oke’, Party Bingo and Interactive Quiz.

Kids are going to need a bit of cheering up this Christmas too, which is where Social Kids comes in. The highlight of the summer series, the event is back with a whole new twist for Christmas. There will be family ‘Christmas car-a-oke’, an interactive quiz, three DJ silent disco and Party Bingo hosted by Santa Claus himself!

It’s not Christmas without food and drink and organisers have thought of that too. Hearty, seasonal fayre from some of the best local food trucks around will be on site, with customers able to have their orders delivered directly to their cars. Expect classic gourmet burgers, loaded fries, wood-fired pizzas and hot dogs alongside sweet winter warmers including hot chocolate, donuts, toasted nuts, gingerbread men and more.

To top it off, each night, events finish with a fantastic, festive firework finale.

John Kinnersley, Chief Operating Officer at XL Event Lab, the company behind the events, said: “After the year we’ve had it really feels like everyone could do with a bit of festive cheer. We had an incredible response to the events that we put on in the summer and the question we got asked more than any was if we could do something for Christmas.

“We waited to hear what the new regulations would bring but we’re now able to confirm that Christmas officially isn’t cancelled. We know how to put on a drive-in party more than anyone else and the line-up of events that we’ve got planned are giving us that warm Christmassy glow already.”