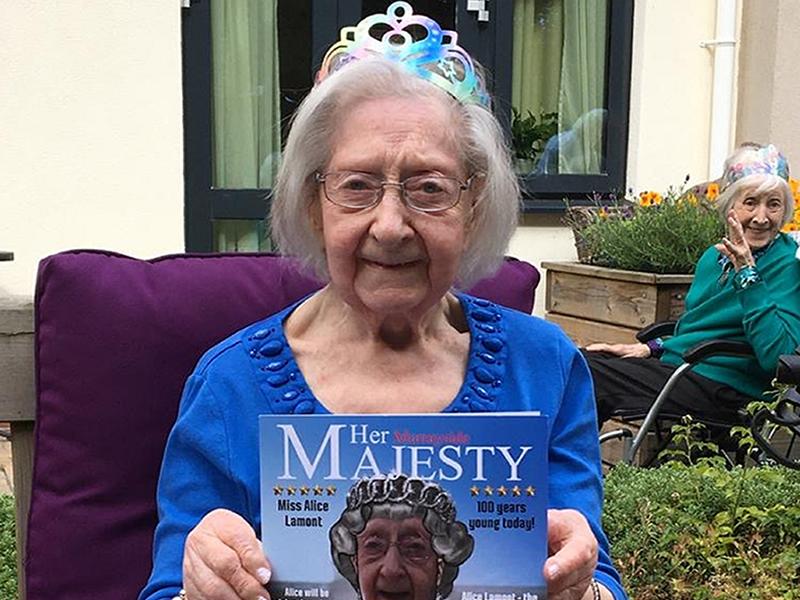 A resident at an Edinburgh care home celebrated her 100th birthday and revealed the secret to living a long life.

Birthday celebrations were in full swing at Care UK’s Murrayside, on South Beechwood, when resident Alice turned 100 years ‘young’ or “100%” as the team agreed on the day. She revealed the secret to living to this impressive age is leading a healthy lifestyle – and maintaining a great sense of humour.

To celebrate, the team hosted a party at the home, where Alice toasted the special milestone with all of her friends at Murrayside, as well as a few visiting family members. Guests were also joined by the home’s ‘very own’ piper, Christopher Happs from George Heriot’s School, who played a medley of tunes including “Murrayside”, the theme song he composed especially for the home, and a rendition of “Happy Birthday”.

Alice also received a special visit from the Deputy Lord Provost of Edinburgh, Joan Griffiths. Together, they planted a commemorative tree, in the home’s garden, which had been specially cultivated by Murrayside’s home manager, Fran Long.

Gillian Gray, customer relations manager at Murrayside said: “Residents are at the heart of everything we do here at Murrayside, and we always like to throw a party for special celebrations – and Alice’s 100th birthday was no exception.

“We were inundated with birthday cards, including one from the Queen, which Alice particularly enjoyed – although everyone at the home made sure she was treated like royalty herself, even calling her “Our Murrayside Majesty” for the day.

“On behalf of everyone at Murrayside, I’d like to say a big thank you to the Deputy Lord Provost of Edinburgh for making Alice’s day so special. Everyone had a fantastic time and we’re looking forward to celebrating many more milestones with her!”

Alice said: “I wasn’t sure how I would feel about having a party but I had a really lovely day with lots of fun and surprises. It was so nice to hear the sound of the pipes and the Deputy Lord Provost brought me beautiful flowers and a silver brooch – so special. All in all it was a very happy day.”

Alice’s nephew, Ken Ross, said: “Alice’s 100th birthday was enjoyed and appreciated greatly by her. The day’s superb events affirmed all that is great about her extended family at Murrayside – excellence of care and support delivered with creativity and fun”

Alice was born in Edinburgh on 22nd August 1920, and has lived there her whole life, attending school in Costorphine in her younger years. She worked at her father’s engineering company, and gave up working when he passed away, to look after her mother. A film and theatre enthusiast, she has fond memories of her many Saturday trips to the Empire Cinema.